The structure of journalism has changed dramatically. The dominance of electronic media provides free and open access to massive amounts of information delivered immediately via the Internet. But it provides no qualifying filter and trusted sources of news and commentary are found side by side with the misguided and misleading.

Yet news itself hasn’t changed. Human nature hasn’t changed. We still have crooks, thieves, power abusers, and the inept. Cover-ups will exist as long as humans exist. To keep dishonesty at bay requires watchdogs—investigative reporters who are willing and able to dig beneath the surface, examine the details, and bring the truth to light. It is more important than ever to identify and support the news sources that have proved themselves worthy of your trust. The Austin Bulldog strives to be such a source.

The year 2014 ushered in an historic shift in political power. The system of electing council members from 10 geographic districts broke the Westside grip and allowed suburban sprawl to overtake City Hall. For the first time women will make up a majority of the City Council—a super majority of seven in fact. Hispanics finally gained representation close to their share of the population and the first Latina will take a seat on the dais. Republicans not only broke the Democratic stranglehold but will hold three of the 10 District council seats.

The next mayor—We provided in-depth coverage of Steve Adler, the man who will lead a council of nine newly minted members and only one holdover. Early articles covered Adler’s achievements as chief of staff to a state senator and as a leader of several important local nonprofits. These were followed by articles critical of his role as an attorney for property owners who were able to avoid compliance with current environmental regulations. The final installment detailed how he personally profited from not having to comply with the Save Our Springs Ordinance for development of a tract in Oak Hill. While Adler won a landslide victory in the mayoral runoff he did so no endorsements from the environmental community and will have to work harder to overcome distrust by protecting our environment.

Independent PAC influence—Through three stories the Bulldog tracked in exacting detail the mounting expenditures of more than $600,000 made by 20 political action committees to boost the candidates they supported while not being allowed to coordinate with the candidates’ own campaigns. That total will no doubt increase as final reports are filed in mid-January and the Bulldog will track all of it. 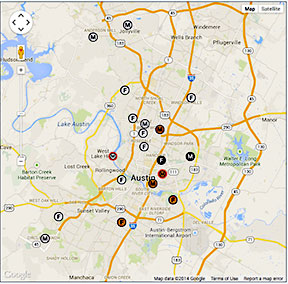 New geographic diversity—Our interactive mapping project illustrated the drastic shift in political power taking place by pinpointing the residence location of candidates elected November 4 and those engaged in the December 16 runoffs, compared with the current and past councils in which members were predominantly from the central city. This year’s project was an outgrowth of earlier work that mapped the residences of candidates elected from 1971 through 2011, a tool that was used extensively in Austinites for Geographic Representation’s campaign that brought about November 2012 voter approval of the 10-1 system of electing council members from geographic districts.

Candidate voting history—We detailed the voting history of 78 candidates for mayor and city council from 1990 through May 2014, including how many times they had voted in total and in Republican and Democratic Party primaries, with links to the actual voting records. While our investigation showed that more than two dozen candidates have been voting since at least 1990, it revealed that one candidate was not even registered to vote.

Political party participation—While the council elections are technically nonpartisan Austin elections are anything but, and the 10-1 system ushered in unprecedented participation by both the Democratic and Republican parties of Travis County, a fact the Bulldog reported on months before election day so that voters would be aware of political party influences.

Candidates rich, poor—Only the Bulldog published an exhaustive analysis of the personal finances of the 78 candidates for mayor and city council, including links to all 156 reports. Like never before this illustrated the wide economic diversity of the candidates.

Candidate sued Bulldog—We exposed the fact that District 6 candidate (now council member-elect) Don Zimmerman lost custody of his daughter over abuse yet touted her on his campaign website. Zimmerman sued the Bulldog for defamation but now is seeking to voluntarily dismiss his lawsuit. The Austin Bulldog is vigorously defending itself and seeking to recover attorney’s fees, costs, and sanctions from Zimmerman under Texas’ anti-SLAPP statute. The case will be heard today, January 5, in district court.

Fair Campaign Funds—Our investigation questioned the validity of the City of Austin’s allocation of Fair Campaign Funds to three candidates, two of which were not entitled to the money, and indicated the City Clerk will seek changes in how these monies are distributed in future elections.

Downtown Alliance spending—Our report revealed the the Downtown Austin Alliance, which gets 99 percent of its annual funding from property tax assessments—spent $440,000 to help fund the pro-rail campaign that failed on the November 4 ballot.

Homestead abuses exposed—The Austin Bulldog completed a six-month investigation that exposed several hundred homeowners who had avoided paying their fair share of property taxes by claiming more than the one legally permitted homestead exemption each tax year. As a result, these homeowners were forced to pay several hundred thousand dollars in back taxes and will no longer be able to game the system.

The tax dodger—We broke the story that Council Member Chris Riley (a District 9 council candidate who lost to Kathie Tovo) owed some $7,300 in property taxes because he improperly claimed his entire property as a homestead although 46 percent of the property is rented. Once discovered, Riley paid his taxes without penalty but, as our story indicated, he escaped paying more than $1,200 because back taxes can be billed for a maximum of five years.

Your support is needed

We hope you will agree that this kind of watchdog reporting has served our community well in 2014 and has earned your ongoing support.

We can’t all be investigative reporters but you can help to ensure that The Austin Bulldog’s important work continues by making a tax-deductible contribution. Please do it now.

Postcard Wars Down to the Wire: Which mayoral candidate best for environment the theme of two latest campaign mail pieces, December 11, 2014

Firefighters Back Martinez With $170,000: He sure needs it with opponent setting fundraising records; PACs independent spending now more than $610,000, December 10, 2014

Candidates Have Voting Records Too: Some vote often, some don’t vote much and one candidate isn’t a registered voter, August 29, 2014

Chris Riley Nailed for Back Taxes: Council member had a homestead exemption on his entire house, including two rental units, August 20, 2014

Steve Adler Land Developer: The mayoral candidate profited from not having to comply with the SOS Ordinance, August 5, 2014

Steve Adler’s Other Environmental Lawsuits: Three more cases in which the candidiate’s legal work pitted him against environmental regulations, June 17, 2014

Steve Adler’s Baggage: Environmental Lawsuits: Mayoral candidate a lawyer whose work puts him at odds with environmental organizations, May 21, 2014

Steve Adler Launches Mayoral Campaign: Big crowd turns out on a hot day to hear what this little known candidate would do, May 5, 2014