Leana Mann started working for the Travis Central Appraisal District (TCAD) in May 2011, the same month she got her accounting degree from Texas State University. Her starting pay was $18 an hour, according to personnel records obtained through public information requests.

Effective January 14th Mann was quietly promoted to become the new deputy chief appraiser earning $195,083. That’s a pay increase of $44,279 from her previous salary of $150,804 as deputy chief of operations. Mann is a licensed Property Tax Appraiser.

The deputy chief’s position has been vacant since Lonnie Wayne Hendry Jr. resigned in July 2019, just as the Bulldog’s investigation of his actions was nearing completion. The Bulldog’s investigation exposed Hendry’s apparent conflict of interest created by having two of his subordinates in the district’s commercial appraisal division working as sales agents in the real estate brokerage he owns, Team Hendry Realty LLC.

The position of deputy chief appraiser was not posted to seek applicants. TCAD issued no press release about the promotion. It was not discussed in the public portion of the Board of Director’s meeting of February 17th.

In response to the Bulldog’s request for comment about this promotion, TCAD issued a statement:

“It is not TCAD’s practice to issue press releases for promotions or new hires for any position other than the Chief Appraiser.

“It is TCAD’s practice to encourage employee development by reviewing internal candidates for management positions on a regular basis. Ms. Mann has spent more than a decade with us and has proven herself to be a reliable and important member of our staff. Throughout her time at TCAD, she has continually received promotions to reflect her growing responsibilities at the agency. Most recently, in her position as Deputy Chief of Operations, it became clear that she had been performing the tasks of a Deputy Chief Appraiser. As a result, in January she was promoted to reflect her hard work. She appeared at the February board meeting in that capacity.”

Mann’s ascent within TCAD to become second in charge follows the same path as Chief Appraiser Marya Crigler, who went to work for TCAD in January 1990 soon after graduating from the University of Texas with a bachelor of science degree in radio-television-film. Her starting pay as a temporary appraiser trainee was $6 an hour, according to personnel files obtained with a public information request.

As later reported by the Bulldog, Crigler was promoted from her position at IT director to lead the organization in November 2011 with a salary of $129,000 per year. At its December 15, 2021, meeting the TCAD board of directors boosted Crigler’s pay to $235,000 and gave her a 5 percent cash bonus.

The board’s first order of business at its February 17th meeting was to elect its officers.

While the board lost Bruce Grube, whose term had expired, and Anthony Nguyen, who resigned, it has gained two new members: Vivek Kulkarni succeeds Grube as a Travis County appointee and Elizabeth Montoya will represent Eastern Travis County, succeeding Nguyen. The terms of both new members will expire December 31, 2023.

Chief Appraiser Crigler told the board of directors that TCAD is suffering staffing shortages and is trying to automate processes as much as possible to take burdens off the staff. She said staff was out in the field now doing discovery and working a lot of overtime.

“We may ask for an increase in appraiser salaries,” she said. “We’re trying to compete but it’s difficult.” Information provided in the meeting materials showed job postings by other employers that would pay starting salaries of $60,000 a year.

Crigler said that salaries for TCAD appraisers have parity with adjacent county appraisal districts but added the work is less difficult in those districts.

TCAD’s Adopted 2022 Budget recognized the challenge of retaining employees and set forth strategies to overcome the problem. Current benefits include retirement, health and dental insurance, sick leave and vacation time. The budget plan called for reviewing rewards and recognition programs, holding morale events, and exploring non-monetary rewards such as flexible schedules and telecommuting.

Crigler said the retirement benefit is not all that attractive for recruiting younger employees.

She said that TCAD may have to increase its budget to accommodate higher salaries and might have to ask the taxing entities that TCAD serves for that money, but first would be looking at internal savings within the agency’s budget.

A spreadsheet the Bulldog obtained from the Texas Department of Licensing and Regulation shows there are 3,533 licensed appraisers in the state. Of those, 206 work for businesses located in Travis County, 44 in Williamson County, 21 in Hays County, and 11 in Bastrop County. (The data is incomplete, however, in that is does not show the county of employment for 245 appraisers.)

The chief appraiser reported that TCAD plans to produce the first run of Notices of Appraised Values (NOAV) April 15th and begin holding informal protest meetings with agents or property owners April 18th. The second run of NOAVs is scheduled for April 29th for the remaining real property.

The deadline for property owners or their agents to file value protests is 30 days after the notices are issued. Information about the protest process is provided on TCAD’s website.

TCAD will continue it series of educational webinars on Wednesday, March 23rd at 11:30am. The topic for the first webinar is Homestead Exemptions. Registration is open now.

The earliest possible date for the Appraisal Review Board to begin formal hearings is June 21st.

Crigler told the board that she thinks “values will go up substantially” and “we will have a very high increase in protests to handle.”

“I hope the ARB certifies 90 percent (of the total appraised value for the district) by July 20th so we can send certified tolls to the taxing entities by July 25th.” We have a very taxing year in front of us.”

The TCAD board voted unanimously to approve a resolution authorizing the chief appraiser or other TCAD employee to act as designated agent to file a protest of the state comptroller’s property value study and audit findings for school districts located in Travis County.

To initiate the protest also requires approval of the school districts’ boards of trustees.

Crigler told the board that the comptroller had found that property values in these school districts were too low. She said, TCAD can’t increase property values from those set by the Appraisal Review Board unless it has “clear and convincing evidence.”

The website for the Texas Comptroller of Public Accounts states that, as a Texas property taxpayer, you have a dozen rights. The first nine of those rights concern how your property is appraised, exemptions for which you qualify and apply timely, the right to protest your property value, and appeal if you don’t get the relief you sought.

Governor Greg Abbott, a Republican, is running for reelection and one of his efforts to win support is promising to add more rights to that list.

On January 17th Abbott unveiled his new initiative in the Houston suburb of Atascocita. There to witness Abbott signing his Taxpayer Protection Pledge were Genevieve Collins, a 2020 congressional candidate and now state director of Americans for Prosperity, and Grover Norquist, founder and president of Americans for Tax Reform, an organization that opposes all tax increases.

“The fact is, not enough Texans actually see the property tax relief we have delivered,” said Governor Abbott. “It’s time to change that. I’m running for governor to pass the Taxpayer Bill of Rights that will deliver substantial and lasting property tax cuts,” according to a press release issued by the governor’s campaign.

If Abbott’s plan is enacted by the Legislature, it would, according to the governor’s campaign flier that was included in the board’s agenda materials:

Chief Appraiser Crigler told the board of directors she anticipates the governor’s proposal will be on the agenda in the next legislative session.

Trust indicators: Ken Martin has been covering local government and politics in the Austin area since 1981 and investigating and reporting on Travis Central Appraisal District since 2011.  See more on Ken on the About page. Email [email protected]

Deadline for property value protests this Friday, May 11, 2020 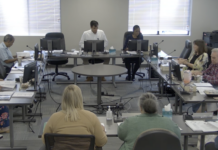