It should come as no surprise that the greatest political power is exercised by those whose wealth, influence, and avid participation enable them to move the levers of democracy in their favor.

The extent to which this is true in Austin is laid bare by maps constructed by The Austin Bulldog that pinpoint the residential location of every mayor and council member elected over the last four decades.

The unalterable fact that emerges is that large parts of Austin are not represented—or are grossly underrepresented—because of the at-large system of elections established by the Austin City Charter.

This is not a new revelation. Attempts to gain voter approval for some form of council districts that would provide for equitable geographic representation have been put on the ballot six times, beginning in 1973, and six times failed to win majority support.

The ship of democracy continues to sail in the direction ordered by the majority. Which is how democracy is supposed to work.

The Austin City Council and a growing coalition of citizens are separately working on two different plans to give voters another opportunity in 2012 to approve a City Charter change to require the majority of city council members to be elected from geographic districts.

Based on what’s been discussed so far, these two initiatives differ significantly regarding how many council districts would be proposed, what procedure would be used for drawing district lines, the length of council terms, and whether terms would be staggered.

Both initiatives are still in the formative stages.

The City Council is scheduled to approve a resolution today (Item 28 on the agenda) to establish a 2012 Charter Revision Committee composed of 15 members who shall be appointed no later than August 25. The committee’s recommendations for charter amendments, and a map that includes any combination of at-large and geographic representation, are due by January 31.

The city’s plan or the grass-roots plan, or both, could wind up on the ballot next year.

But it should be noted that this appears to be the first time that a broad coalition of community organizations have launched a serious effort to formulate a plan that is independent of whatever proposal the city council puts forward, according to those involved in previous election campaigns for council districts.

None of the six failed propositions got on the ballot through a grass-roots petition drive. In the past, voters have only been able to react to whatever plan the city proposed—and the reaction has always been unfavorable.

Some may wonder why council districts are needed. After all, the city is not being pushed by legal action because it ran afoul of the Voting Rights Act, which ensures the opportunity for minority representation.

In fact, two federal lawsuits filed against the City of Austin failed to convince judges that Austin—a city in which voters have since 1975 consistently elected members of the protected classes (African Americans and Latinos)—is in need of a court order to mandate council districts.

Although geographic representation is not a matter of concern to federal authorities, one need only look at the Aggregate Map 1971-2011 to realize the gross inequities in geographic representation that have existed for much of the last four decades. From the aggregate map you can navigate to 26 other maps, one for each election conducted over the past four decades. Every map pinpoints where each member of the council lived when elected. 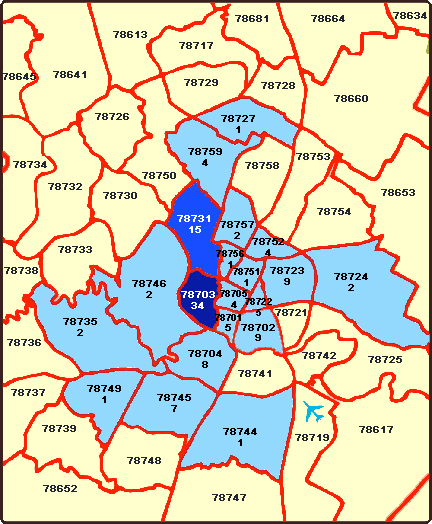 Forty-nine of those seats were won by people who lived in West and northwest Austin (see zip code map for 78703 and 78731).

Mayors live west—Of the 17 mayoral elections since 1971, 15 were won by candidates who lived in West and Northwest Austin. One mayor lived in Northeast Austin (Gus Garcia in 2001) and one lived downtown (Will Wynn when reelected in 2006, although he, too, lived in West Austin when first elected mayor in 2003).

Mayors prefer 78703—Eleven of the 17 mayoral elections were won by candidates from zip code 78703.

Council members too—West and Northwest Austin not only dominated the mayoral elections but council elections as well. Thirty-two candidates who won city council seats lived in zip codes 78703 and 78731, leaving 68 council seats for the rest of the city.

South Austin underrepresented—Nineteen of the 100 city council contests—and no mayoral races—were won by candidates who lived south of the Colorado River.

In other words, out of 117 mayoral and council seats, 16.2 percent were won by candidates from an area that has 40 percent of the city’s population, according to City Demographer Ryan Robinson.

The political longevity of some of those who were elected from South Austin before term limits were imposed mitigated some of the disparity. Nevertheless, seven of the city councils formed as a result of the 26 election-cycles had not one council member who lived in South Austin. Forty percent of Austin citizens had no geographic representation.

Other areas also slighted—Large areas of Austin have rarely or never been represented, some because of not being within the city limits until annexed in more recent decades (e.g., Circle C in Southwest Austin, and Anderson Mill in Northwest Austin), others for reasons that are less clear (e.g., Oak Hill in Southwest Austin;  Central Austin north of U.S. Highway 183; and Central Austin, south of William Cannon Drive).

Proximity to City Hall—A solid majority of those who have been elected to the city council over the last four decades lived within three miles of City Hall, as the grackle flies. Using Google maps, an analysis shows that of 117 positions available, voters elected:

Statistically speaking, this is just another way of saying that political power is highly concentrated within the central city.

Although minority representation on the city council has been sufficient to stave off legal intervention, informed observers will note that that the minority members elected were not put in office on the strength of their support in the minority communities, but by the Anglo community.

In an opinion piece published in the Austin American-Statesman June 4, 1997, “Racial paternalism must yield to single-member district voting,” Young noted that Eric Mitchell, an African American elected in 1994 and running for reelection, and Manuel Zuniga, a wealthy Latino seeking election, were both heavily supported within their respective minority voting precincts. Yet both lost.

“…the white majority finally and irrefutably demonstrated that the selection of the minority representatives is the white majority’s prerogative and the ethnic communities’ preferences are not determinative,” Young wrote. “What this says to blacks and browns is simply that you will be heard at City Hall, but we will choose your voice.”

This has always been the case—if for no other reason than the Anglo (white non-Latino) population vastly outnumbers the minority populations.

While the Anglo population has declined from 61.7 percent of the population in 1990 to 48.7 percent in 2010, according to the City of Austin Demographic Profile, and Latino population has grown from 22.8 percent to 35.1 percent in the same two decades, Anglos historically have shown a far greater tendency to actually cast votes.

Though the African-American population has been in a long-term decline it still must be factored into any proposal for council districts to provide for representation.

This article states that proponents of a system of geographic council districts and some at-large positions, including Mayor Lee Leffingwell, are wrong in thinking that system would provide better geographic representation than the current at-large system.

“The problem could easily be resolved if more people from all areas of Austin would vote.”

While increased voter turnout would be good for any number of reasons, no amount of voting is going to provide representation to candidates that come from less affluent areas of the city or minority candidates, neither of which are usually able to muster the resources to organize an effective campaign and reach the larger population with their messages.

As long as Anglos greatly outnumber minorities and continue to possess significantly more resources and influence, the at-large system will continue to produce the skewed results reflected over the past 40 years. To think otherwise is akin to believing that doing the same thing over and over again will produce a different result.

Disclaimer: While all of these statistical conclusions are relevant and helpful in understanding the results of how political power has been wielded in Austin, no effort was made to analyze the residence locations of the many hundreds of candidates who unsuccessfully ran for mayor and council positions.