More than five years after The Austin Bulldog filed a lawsuit against Mayor Lee Leffingwell, the other six council members, and the City of Austin, the Austin-based Third Court of Appeals on April 8, 2016, handed down a landmark legal decision. The court ruled that government officials are not “members of the public” and when they use private e-mail accounts to conduct public business they will forfeit the right to keep their e-mail addresses concealed from the public.

The Third Court’s ruling advances the public’s interest in holding government officials accountable. The decision is of vital interest in government and legal circles, and it triggered a front-page story in the Austin American-Statesman as well as articles in both the Texas Tribune and Law360.com, a national publication covering the legal industry. 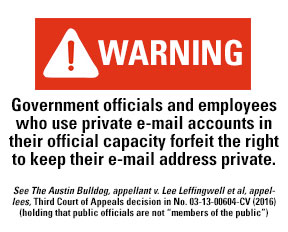 The decision serves notice to elected officials and others in government service that they ought to do the public’s business through their government-issued e-mail addresses—and not hide public information by using personal accounts.

“Any time a public official uses a private e-mail account for public business—that’s highly suspect,” said Attorney Joseph Larsen, special counsel to Sedgwick Law in Houston (who subsequently moved to Gregor Cassidy PLLC) and a board member of the Freedom of Information Foundation of Texas.

Decision will have wide impact

The Appeal Court’s decision not only applies to the City of Austin, a defendant in The Austin Bulldog’s lawsuit, but to all governmental agencies within the 24-county jurisdiction of the Third Court of Appeals. State agencies based in Austin should take heed. So should Texas Governor Greg Abbott. The governor roundly criticized presidential candidate Hillary Clinton’s e-mail imbroglio stemming from her use of a private e-mail server while Secretary of State. Last year the Texas Tribune reported that Abbott, too, has shielded his private e-mail accounts using the “member of the public” exception.

Attorney Bill Aleshire of Austin-based Aleshire Law PC, who represented The Austin Bulldog in the lawsuit, said, “Technically the opinion only applies to the Third Court’s district, but it should serve as a precedent elsewhere. And from now on, the Attorney General should follow it when issuing opinions.

“To the best of my knowledge, the Attorney General has held directly opposite of this opinion every time the issue of shielding public officials’ e-mail addresses came up in an open records request. That will stop,” Aleshire said.

“The decision will also apply to any public information requests made from now on—even if the e-mails were written previously.”

In legal terms, that practice constituted a conspiracy to circumvent compliance with the Texas Public Information Act, as defined in Government Code Chapter 551.143(a):

Uncovering the City Council’s closed-door deliberations led to the question of whether these elected officials might also be violating the Act through quorum discussions of City business via e-mail. To find out, The Austin Bulldog in January 2011 filed two public information requests for e-mails exchanged by the mayor and council members over a 13-month period.

In responding to these requests, the City charged The Austin Bulldog $1,039 to provide some 2,000 pages of messages sent and received on their city e-mail accounts. But the City refused to provide messages about city business exchanged through the elected officials’ private e-mail accounts. As a result The Austin Bulldog filed a lawsuit March 1, 2011, to get those messages.

After being sued, one-by-one the elected officials released batches of e-mails from their private accounts, some just a few pages and others hundreds.

But in all the private-account e-mails released, the sender and receiver’s addresses were blacked out. That made it difficult, if not impossible, to identify which officials were involved in the communications. These redactions prevented determining whether these officials had violated the Texas Open Meetings Act by holding a quorum discussion about city business outside a properly posted public meeting.

The investigative report published by The Austin Bulldog, and a formal complaint filed by civic activist Brian Rodgers, resulted in a criminal investigation conducted by County Attorney David Escamilla—announced later the same day the Bulldog report was published. Over the next 20 months, investigators gathered more than 30,000 pages of documents, including subpoenaed telephone records, text messages, and unredacted copies of the private e-mails.

At the investigation’s conclusion in October 2012 Escamilla issued a written statement: “In addition to the systematic one-on-one meetings that were the subject of the original complaint, we found that council members regularly deliberated outside of the public’s purview by use of almost every modern communication medium that exists. As a result of our investigation, we found probable cause to believe that multiple violations of the Texas Open Meetings Act had occurred.”

Prosecutions of such violations, however serious, are complex and seldom pursued. Instead of being charged, prosecuted and, if convicted, fined and sentenced to from one to six months in jail, as the law requires, each of the elected officials, and their individual criminal defense attorneys, signed deferred prosecution agreements. The agreements put the council members on probation for two years. The agreements also waived the statute of limitations on the collected evidence. Thus any new violation of the Act would enable prosecution not only for the new crime but also for the previous offenses.

Confidentiality of private e-mail addresses had been granted to “members of the public” through amendment of the Texas Public Information Act in 2001. Since then, the Texas Attorney General has issued various opinions that granted the same exception to disclosure for officials and employees who conducted government business using their private e-mail accounts.

Although the private e-mails about City business were busted loose by the lawsuit, The Austin Bulldog continued the litigation to challenge the Attorney General’s policy—a policy that is not enshrined in the Texas Public Information Act.

Open Records Letter Ruling OR2011-05507 was issued by Attorney General Greg Abbott in response to the City of Austin’s request regarding the private e-mails at issue in The Austin Bulldog’s public information requests. That ruling authorized the council member’s private e-mail addresses to be redacted.

The Texas Public Information Act is silent on whether government officials are “members of the public” and thus entitled to the same confidentiality. The Appeals Court’s decision went into that issue at great length to remove all doubt, concluding:

“The City is correct that we generally give due consideration to Attorney General decisions, although they are not binding, because the Legislature has directed the Attorney General to determine whether records must be disclosed under the (Public Information Act). However, we only defer to agency interpretations that do not contradict the plain language of the statute in question and … the interpretation offered here contradicts the exception’s plain language.”

“…this interpretation satisfies the (Public Information Act’s) mandate that the public have ‘complete information about the affairs of government and the official acts of public officials and employees,’ even where, as here, those officials chose to conduct official government business using private e-mail addresses.”

Attorney Larsen said of the appeals court findings, “It’s the right decision. It goes to show the lengths to which government officials will go to conceal their activities. No one wants to know their private affairs, but when using their private e-mail accounts for public business, that’s public information.”

Five years before the Appeals Court ruling—less than six weeks after The Austin Bulldog sued—on April 7, 2011, the Austin City Council enacted a new policy by passing Resolution No. 20110407-14, which states:

The new policy immediately applied only to the council members and the five employees they directly supervise. But the resolution ordered the city manager to enact a similar policy for all city employees. It also directed the city clerk to implement a like policy for the volunteer members of the city’s boards and commissions.

The bad news is that because the City eventually provided all the records requested, The Austin Bulldog is not entitled to attorney’s fees.

The good news is the Third Court’s decision included a Judgment that requires the City of Austin to pay all costs related to both the appeal and the lower court case. Aleshire estimates that will be about $1,400 to cover out-of-pocket expenses for such things as citations, e-filing, and transcripts.

“Otherwise, governmental bodies have an incentive to force requestors to go to the expense of filing suit and, then and only then, finally produce the records before a final judgment in favor of the requestor can be entered.”

What other publications said about the decision:

Furthering the cause of open government, Corpus Christi Caller-Times, April 11, 2016

Related Bulldog coverage: This is The Austin Bulldog’s seventy-third article about local government agencies’ problems and progress in dealing with open government issues. Here are the links to our previously published articles, listed in reverse chronological order:

Depositions Expose Public Information Flaws: An assistant city manager who doesn’t like to write, a public information manager who is inexperienced, November 9, 2015

Ethics Reform an Ongoing Struggle: Win some, lose some in the sausage making of the Texas Legislature, September 22, 2015

Daugherty Wins SOS Round One: Judge Yelonosky rules mostly in favor of commissioner but leaves room for further action, July 27, 2015

City to Rodgers’ Lawsuit: Fuhgeddaboudit: City of Austin’s answer claims suit is moot as it has provided all responsive records, July 6, 2015

Why Acting Ethically, Legally Matters: Many a high-profile scandal persisted for years because nobody stepped forward, April 14, 2016

Commissioners Court Responsive to Open Records Requests for E-mails: In sharp contrast to resistance by the City of Austin, Capital Metro, March 14, 2011

The Austin Bulldog Files Lawsuit to Compel Compliance with the Law: Mayor and council members not in compliance with statutes for public information, records retention, March 2, 2011

Berryman Expenses Finally Detailed in Response to Request and Complaint: After the fact compilation now open to public scrutiny, November 9, 2010