How do we know that CAMPO was overly optimistic with its projections for the 2030 and 2035 plans? The 2035 Plan projects future growth in traffic almost identically to the 2030 Plan. But actual traffic counts and total miles traveled, on average, are flat or actually falling. (See accompanying chart, “TxDOT Traffic Counts.”)

Why have trends changed?

Data from the Texas Department of Transportation (TxDOT), indicates that traffic volume has not increased since the turn of the 21st century. This has occurred even in the face of significant population growth. The trend changed well before the economic downturn began (since 2008, traffic volume has fallen 10 percent) yet CAMPO and TxDOT continue to present projections of traffic growth that continues at 20th century rates. 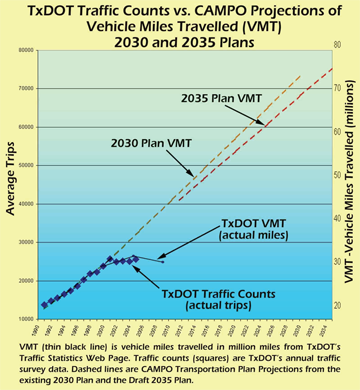 There are many other reasons why we are driving less, including environmental awareness, fewer wives and mothers entering the work force, the high cost of fuel, and the decreasing earning power of the average American. These factors are unlikely to change. In addition, climate change regulation and peak oil—the point when worldwide production of conventional crude oil peaks in volume, which is expected to result in an increase in oil prices—likely will contribute to a continued steady decline in personal miles driven, far into the future.

How can we proceed with implementing the 2035 Plan if it fails to acknowledge that traffic volume has not increased since 2000?

This one major fundamental misstep is not the only thing that is troubling about the 2035 Plan. There are other inconsistencies in its presentation of traffic data. Many of these inconsistencies are obvious in the chart: Why does the 2035 Plan, submitted for public comment just a few short months ago, show the VMT in 2010 to be almost 20 percent higher than what was posted on the TxDOT website as actual VMT in August 2009?

These discrepancies and others like them could easily have been addressed with updated information from TxDOT. Why was this not done?

President Obama’s national climate change plan would have us reduce carbon emissions 17 percent below 2005 levels. This would reduce America’s contribution to climate change back to 1989 levels. For reference, the Kyoto Protocol called for reductions in U.S. carbon emissions of 7 percent below 1990 levels, or back to what we were emitting in 1984.

Miles traveled in the year 2035 Plan are projected to increase 237 percent above today’s levels. Yet the 2035 Plan shows that we reduce our carbon intensity from 1.22 to 0.78 pounds per mile of travel (a 36 percent reduction). However, the physics of climate change do not recognize carbon intensity.

It is the actual load of carbon (or total volume of greenhouse gases) in the atmosphere that is causing our climate to change. Most greenhouse gases last a long, long time. New research says that half of all CO2 emitted will stay in our skies for 300 years, half of what remains will stay for 10,000 years and the rest remains forever. Even if we were to stop emitting altogether, it will still take centuries for our atmosphere to stabilize. So the 2035 Plan’s proposed carbon “intensity” decrease of 36 percent, when combined with the proposed increase in traffic volume of 237 percent, means that the net effect is an 85 percent increase in the emissions load.

This means that we would almost double our carbon emissions under the 2035 Plan. How can this country meet its goal of reducing carbon emissions if one of the greenest cities in the country behaves in this manner?

A great disservice has been paid to the public with the 2035 Plan’s labeling of the Edwards Aquifer Recharge Zone as having “Low Sensitivity.” The environmental sensitivity of this area has been understood at the city, county, state and federal levels, through water quality protection regulations and through federal Endangered Species Act and numerous environmental protection plans for more than two decades.

Beyond this significant oversight, new discoveries about the workings of the Edwards Aquifer have led to a greater understanding of just how sensitive the Edwards Aquifer and its Recharge Zone really are. Twenty-five years ago, we understood that almost all recharge occurred in creeks and streambeds where rapid infiltration through fissures in the limestone allowed runoff to flow directly into the aquifer. It was understood that little recharge occurred in upland areas, or anywhere other than streambeds. Any recharge that did make it to the aquifer from the upland areas was assumed to be effectively treated and filtered by soils. It was believed that few to no pollutants would enter the aquifer from the upland recharge areas.

Based on this understanding, the City of Austin and the Texas Commission on Environmental Quality developed rules to prevent aquifer pollution. The rules called for polluted stormwater to be sprayed on upland areas. As the stormwater infiltrated the soils, the microorganisms in the soils and plants would effectively “treat” the pollutants in the runoff.

Our current understanding comes from continued research over the last twenty-five years, including numerous studies in which dye was released into stormwater runoff and allowed to recharge into the aquifer. Its path and speed underground were mapped as it surfaced in the many springs that outcrop from the aquifer. Toxicity studies of endangered species have also shown a greater susceptibility to stormwater impacts than were previously understood.

One of the most important discoveries became public in 2009 when Nico Hauwert, PhD, a hydrogeologist and senior environmental scientist with the City of Austin Watershed Protection Department, published research findings that included an exhaustive summary of the last 25 years of Edwards Aquifer research. Hauwert’s research also showed that upland recharge, from his study site adjacent to and on the right of way for State Highway 45, is 30 times greater than what we had thought.

Cumulatively, this research leaves us with a significantly different picture than what was understood when current aquifer protection rules were created:

• Recharge into the aquifer is 30 times greater from the uplands,
• Uplands pollution treatment is almost zero,
• Travel time to Barton Springs is significantly faster than previously assumed, and
• Endangered species are affected by stormwater pollution.

What does this mean? A moratorium on development over the recharge zone should be created until we better understand these new discoveries. The science and regulatory communities need time to study these findings more carefully, so that the adequacy of existing environmental protection rules can be assured, or new rules can be created.

In total, the 2035 Plan must be significantly rewritten. The 20th century planning methodologies undertaken in the 2035 Plan do not apply in the 21st century. Discrepancies in traffic data must be corrected and legal and regulatory status of the Edwards Aquifer Recharge Zone must be acknowledged.

When Bruce Melton, P.E., isn’t practicing civil engineering, he’s filming documentaries about climate change and writing a book about it, a book for the masses. Melton was one of eight Austinites named in the Heroes of Climate Change article published in The Good Life magazine in July 2007. To read more of his work on climate change, visit his website, Melton Engineering Services Austin.