A group of healthcare and taxpayer advocates has stepped up criticism of Central Health, saying it lacks financial control over spending by its third-party providers and partners.

Central Health, known legally as the Travis County Hospital District, is a local government agency mandated to provide healthcare services to the poor. But unlike most other hospital districts in Texas, which operate their own hospitals and clinics, Central Health works principally through third-party providers.

Among these are the nonprofits CommUnityCare and Sendero Health Plans, Ascension Seton, and the Dell Medical School of the University of Texas at Austin. In a newly released report, critics said that contracts with these third parties lack “standard healthcare payor contractual provisions and procedures for financial accountability and transparency.”

The report comes ahead of a potential vote July 26th by the Travis County Commissioners Court to order a performance audit of Central Health. As reported previously by the Bulldog, three commissioners indicated their support for such a move, making it likely to be approved unless one of them changes their position. 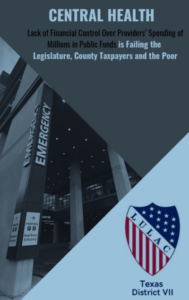 “I implore the county commissioners to do an audit and put in structural reforms going forward that ensure transparency and compliance with state laws and rules,” said Roger Falk, an analyst and advocate for the Travis County Taxpayers Union, at a press conference July 14th where the new report was released.

Moreover, Central Health’s affiliated nonprofits don’t produce public financial reports and aren’t subject to state public information laws, making it more difficult for the public to access information about their finances. “It’s wrong for us to be payors and not know where our money is going,” Falk added. “This is not chump change. We’re talking about over $1 billion so far, over $1,000 for every man woman and child in Austin. How can we have trust in this entity if there’s no accountability?”

Susan Spataro, a former Travis County auditor, said, “Now is the time for the commissioners court to ask questions and get documentation. How do you do that? Well, an effective control or tool is a performance audit. Performance audits talks about efficiency, effectiveness, and compliance with the law.”

She said that Austin is becoming increasingly less affordable, making it all the more important to spend property taxes wisely. “Tens of thousands of people can’t pay their property taxes any more. They have to sell their house or they can’t afford their rent because property taxes went up. So we need to make sure that every dollar that’s spent of taxpayers money is effectively spent to help the poor.”

“Those are not antithetical. It’s not like we don’t care about the poor. We do care about them. They need to be getting the kind of care that taxpayers are paying. And governments need to start looking at those tax rates because people can’t live here any more,” she added.

Fred Lewis, an attorney who formerly worked in healthcare and insurance law, authored the 40-page report on behalf of Texas LULAC District VII. It echoes some of the same criticisms of a March 2022 joint report by NAACP Austin and LULAC, but with more specific emphasis on financial controls and transparency.

Speaking at the July 26th press conference, Lewis stated, “It’s a 40-page report, it’s very detailed, but basically what it says is that Central Health has no financial controls over the money that it gives, that is spent by its third-party providers.”

He pointed out that Central Health last did a performance assessment in 2017. That review, carried out by consultants Germane Solutions, concluded that that Central Health “does not have full influence and visibility into how fund flows to partner entities are ultimately used to benefit the community.” Despite that finding, and recommended changes, “five years later Central Health has implemented none of those changes,” Lewis stated.

Lewis is a long-time critic of Central Health and has been involved in litigation over its $35 million per year payments to Dell Medical School, which he says constitute an illegal gift of public money for which no services are rendered. He also co-produced with filmmaker Steve Mims a 30-minute documentary on the topic.

Central Health operates under a Texas state law, the Indigent Health Care and Treatment Act, that doesn’t authorize a local hospital district to fund a medical school, unless it’s for services rendered to the poor. Lewis’s report says that “Central Health’s Affiliation Agreement with UT-Austin fails to specify what services Central Health will pay for, fails to set out a payment formula, and fails to allow Central Health to inspect, audit and require regular reporting of the medical school’s expenditure of its public funds.”

It calls for a “full accounting of how much, if any, direct health care to the poor Dell Medical School has provided.”

Central Health isn’t the only Texas healthcare district to make payments to a medical school. Germane Solutions pointed this out in its 2018 report, citing the example of Harris Health, which at the time had contracts Baylor and UT-Houston exceeding $250 million annually. However, the report highlighted a key difference: “The difference is that for the other peer institutions, these dollar flows can be cleanly linked back to the costs associated with physician and resident time and overall program support—whereas this linkage is less concrete in the case of Central Health.”

“Essentially UT can spend (Central Health’s payments) on anything they want to, whether it serves the poor or whether it’s in compliance with the statute,” Lewis said.

For its part, Central Health says it has already scheduled an independent performance review. Communications Vice President Burton told the Bulldog in a June 24th email, “Central Health already undergoes a comprehensive independent performance review every five years, which was recommended by Travis County Commissioners. Our last review was conducted in 2017 with a comprehensive report issued in 2018. Our next review is scheduled for 2023, and planning is currently underway.”

When the Me Too movement collides with Black Lives Matter something’s gotta give, October 30, 2020 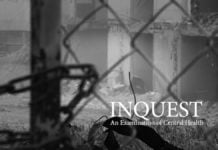