The most significant changes reflected in the latest mid-year Statements of Financial Information submitted by Austin City Council members appeared in the statement submitted by Council Member Mike Martinez. He listed the names of 49 entities in which he and his wife, Lara Wendler, held, owned, acquired, or sold stock, or any other equity ownership having a value of $5,000 or more.

These holdings appear to represent an investment of at least $245,000, if each of the 49 stocks were valued at the minimum $5,000. These stocks cover a wide range of investment funds. None involve local companies.

Martinez did not report these investments in his last annual report.

Seeking clarification, The Austin Bulldog e-mailed Martinez August 8 to ask if he owned these stocks during 2010—and failed to report them in his last annual report—or acquired them since January 1.

Martinez replied August 10: “After consulting with counsel, my wife and I have expanded the mid-year PFS (personal financial statement) to provide more information. The mid-year PFS accurately reflects our current situation.”

Martinez did not respond to a follow-up query to again ask if he had owned those investments last year and failed to report them. 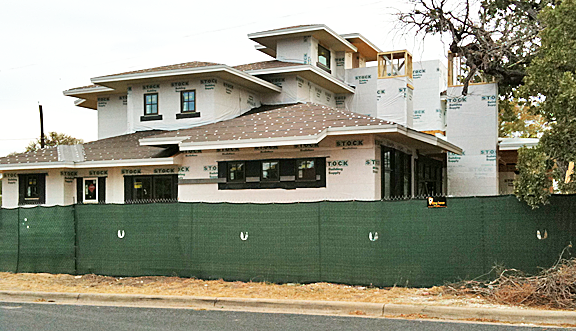 Martinez currently has a new home under construction at 2314 E. 11th St., in Central East Austin near Boggy Creek Park. The 11,641-square-foot lot was purchased October 29, according to the Warranty Deed, and the building permit was issued May 31. The three-story, single-family residence being built by Olson Defendorf Custom Homes has 5,289 square feet, with 4.5 bathrooms and two garages, according to building permits downloaded from the city’s website.

Martinez’ financial statement indicates that he paid off three loans and took out three new loans. He also joined the board of directors of three organizations that benefit youth and social justice: Police Activity League, Community Shares of Texas, and Christopher Guild.

Mayor Lee Leffingwell’s statement indicates that his wife, nurse Julie Byers, retired from her job with Seton Hospital in March.

Council Member Bill Spelman’s statement indicates that the condominium he owns, which was under construction last year at 1200 E. 11th Street, is now rented. His wife, Niyanta Spelman, has left the board of Liveable City Inc. The council member is now one of eight directors-at-large on the Texas Municipal League’s board of directors. The statement also indicates that Spelman, a University of Texas professor, is no longer doing work for the Texas Windstorm Insurance Association.

Council Member Kathie Tovo’s statement reflects a new client for her grant writing work, the State Preservation Board. She has left the board of directors of The Dream Come True Foundation and joined the board of the Families With Children From China.

The statement filed by Council Member Laura Morrison reflects no changes since her last annual report.

The statement filed by Council Member Chris Riley reflects no changes since his last annual report.

The mid-year updates require reporting of any changes in financial status that have occurred since the last annual reports, which were due in late April.

The Austin Bulldog’s June 2 report covered the annual reports going back as far as calendar year 2008 for those members who had been on the council that long, as well as runoff candidate Kathie Tovo, who was elected June 18. That report included copies of all available financial statements and mid-year updates, and noted major problems in some reports.

The questions these officials are required to answer in completing forms for the Statement of Financial Information closely track the definition of “substantial interest” provided in City Code Section 2-7-2. The answers they provide give an indication of what an official would be prohibited by Section 2-7-63(A) from participating in a vote or decision.

Filing these statements is a serious matter. City Code Section 2-7-999 prescribes the penalty for any violation of the provisions of Sections 2-7-61 through 2-7-76 (the latter establishes the filing deadlines) “shall be punished by a fine in an amount not exceeding $500.”

Offenses of this nature are prosecuted in Municipal Court. Section 2-7-41 sets forth the procedures for filing sworn complaints about violations.

Complaints may also be filed with the city clerk for consideration by the city attorney and the Ethics Review Commission in accordance with City Code Section 2-7-41(A).

This report was made possible by contributions to The Austin Bulldog, which operates as a 501(c)(3) nonprofit to provide investigative reporting in the public interest. Please support this important coverage by making a tax-deductible contribution.