The Austin Bulldog
HomeElectionsCouncil candidates have voting records too
Elections

Council candidates have voting records too

Some vote often, some don’t vote much at all

When it comes to the 2020 Austin City Council election set for November 3, 2020, voters can examine the actual performance of the four incumbents seeking reelection. 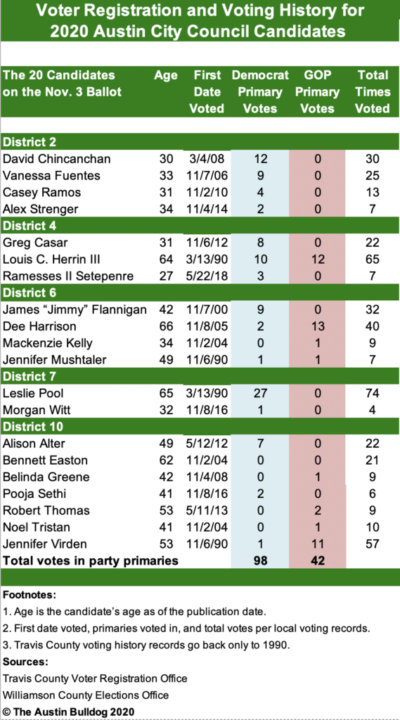 But what of the other 16 candidates whose names are the ballot to fill five seats on the dais? None have held elective office. So aside from what these candidates say on the campaign trail or on their campaign websites, how do we judge their fitness for office?

The Austin Bulldog aims to provide information that assists voters in choosing which candidates are deserving of donations, volunteer efforts, and votes. To that end, this is the second in a series of articles that will offer filters through which the candidates fitness to serve will be assessed. (Our August 27, 2020, article detailed which candidates are drawing heavy financial support from developers.) This article focuses on how much each of the 20 candidates have participated in democracy by casting their votes at the ballot box.

The Austin Bulldog obtained records from voter registrars in Travis and Williamson counties that provide the voting history of each of the candidates running for election or reelection to the city council.

Records for four candidates stretch back to 1990

District 4 candidate Louis C. Herrin III cast his first vote in 1990 as well, and voted 65 times in all.

One other candidate also voted locally for the first time in 1990. District 6 candidate Jennifer Mushtaler did so as a University of Texas engineering student at age 19. She said she was inspired by Ann Richards, who visited the campus and went on to win the governor’s office, no doubt helped by Mushtaler’s vote.

But in winding her way through electrical engineering and medical degrees, Mushtaler moved away from the area and has only in recent years gotten reengaged, hence her low number of total votes.

Despite the fact that city council elections are nonpartisan, a candidate’s political party matters a great deal to many Austin voters.

Democrats took offense and reclaimed two of those seats in 2016, when Jimmy Flannigan scored a comeback victory over Zimmerman, after losing to Zimmerman in the 2014 runoff. In addition, Alison Alter beat Gallo in a runoff in 2016. When Troxclair stepped down without seeking reelection in 2018, Paige Ellis won the District 8 seat.

While our chart indicates 15 of the candidates voted in at least one Democratic Party primary, eight candidates have voted in Republican primaries.

Dee Harrison, a District 6 candidate, voted in the 2020 Democratic primary and runoff this year but from 2005 through 2016 she voted 13 times for Republicans in the primary.

Mackenzie Kelly, also a District 6 candidate, voted for the first time in the 2000 GOP primary. “I was 18 and voted for George W. Bush for president, Kelly said in a phone interview. She was attending Westwood High School in Round Rock at the time. Unfortunately that vote did not appear in the Williamson County records obtained for this story. But she did vote in the Republican primary this year. Kelly said she was awakened to the need to vote by The Austin Bulldog’s similar coverage of candidates’ voting in 2014, when she first ran for the District 6 council seat. “I realized I need to support the candidate that represented my values and ideals, especially in the primaries.”

That Kelly is indeed a Republican is underlined by the fact that Andy Hogue, a volunteer in her campaign who emailed a press release on her behalf last week, is the communications director for the Travis County Republican Party.

Jennifer Virden, a District 10 candidate cast a vote in a Democratic primary of 2008, while her other 11 primary votes went to Republicans.

Bennett Easton’s voting record is notable in that he has voted 21 times but never in a GOP or Democratic Primary. That’s no doubt because he’s a staunch Libertarian who has run for elective office three times before, according to Ballotpedia:

Texas House 2014—He took on incumbent Donna Howard in the election for State House District 48 and netted 22 percent of the votes.

Texas House 2016—He challenged Howard again and got nearly 21 percent of the votes cast.

This year he’s set his sights on the District 10 seat occupied by incumbent Council Member Alison Alter, as have five others.

Aside from ambition, a candidate doesn’t need much to meet the basic qualifications to run for elective office in the City of Austin.

Article II, Section 2 of the Austin City Charter prescribes the basic criteria. All candidates must have resided continuously in the state for 12 months and in the city for six months immediately preceding the regular filing deadline for a place on the ballot (in other words, they were required to have taken up residence in Austin by no later than August 17, 2019).

Candidates for a city council district must also have resided in the district from which they are seeking election for six months immediately preceding the filing deadline (by no later than February 17, 2020). According to ballot applications the candidates filed with the City Clerk’s Office, all meet that criteria. The shortest time any candidate has lived in the district sought is Morgan Witt, who had resided in District 7 for nine months as of August 17, 2020.

While meeting these criteria—in addition to paying a filing fee or submitting signatures in lieu of filing fee—is all that’s needed to get on the ballot, voters might like to know that candidates have been around town for a while and thus have had opportunities to be more familiar with the city and the issues important to its citizens.

Yet many candidates are relatively recent participants in local voting. For purposes of this article we define “recent” as having been voting in the City of Austin for five or fewer years (in 2016 or later). We chose that criteria because having been registered for five or more years was one of the qualifications to serve on the Independent Citizens Redistricting Commission, which will redraw maps for the city council districts after the 2020 Census is completed.

The candidates who first voted in 2015 or later are:

Morgan Witt, a District 7 candidate who voted locally for the first time in 2016.

Pooja Sethi, a District 10 candidate who first voted locally in 2016.

Ken Martin has been covering local government, elections, and politics since 1981. See more about Ken on the About page.

Candidates have voting records too, August 21, 2014