Clay Dafoe—who along with former Council Member Brigid Shea ran unsuccessfully against Mayor Lee Leffingwell in his 2012 reelection bid—has invited the mayor to settle without litigation Dafoe’s claim for damages by paying him $40,000.

This in lieu of the potential for more than $65,000 in statutory damages that could be awarded if Dafoe were to prevail in a lawsuit over Leffingwell’s failure to timely file accurate campaign finance reports as required by the state Election Code.

Mayor Leffingwell did not respond to an e-mailed request for comment about the settlement offer or to a voice message left with his chief of staff, Andy Mormon.

Election Code Section 254.231 makes a candidate who fails to report campaign contributions or campaign expenditures that are required to be reported liable for damages to opposing candidates in twice the amount that was unreported and reasonable attorney’s fees incurred in the suit. (If judgment should be rendered in the defendant’s favor the defendant is entitled to reasonable attorney’s fees.)

The Austin Bulldog’s investigative report, published March 5, showed that Leffingwell’s 2012 mayoral campaign did not account for $32,716.54 in funds. In addition, his 2009 campaign left more than $40,000 unaccounted for. (See Lee Leffingwell 2009 and 2012 Campaign Finance Reports Analysis .)

The report also questioned the source of a $30,000 loan that Leffingwell reported having made to his 2012 reelection campaign, because the lender’s address was not his own but that of Thomas Coopwood, M.D., who Leffingwell personally nominated for reappointment to the Central Health Board of Managers.

The Clay Dafoe Invitation for Settlement letter, written by attorney Bill Aleshire of Riggs Aleshire & Ray PC, was hand delivered to the mayor March 18. The deadline to accept the offer—by paying the $40,000 and filing corrected reports—is 5pm April 1.

The settlement offer states, “Mr. Dafoe will refuse to agree to any provision making the settlement confidential and reserves the right to make any correspondence or other documents regarding this matter public, including this letter and your response.”

The day after The Austin Bulldog’s investigative report was published Leffingwell filed Correction/Amendment Affidavits for both the 2009 and 2012 Campaign Finance Reports.

Attorneys with decades of experience in election law said the filing of these Affidavits does not bar lawsuits claiming damages.

The Lee Leffingwell 2012 Correction/Amendment Affidavit attributed the wrong residence address for a $30,000 loan that Leffingwell had reported making to his campaign as an “inadvertent cut and paste error in which the address of a contributor was mistakenly stated where the address of the lender should have been.”

The same Correction/Amendment Affidavit also added five political expenditures that were “inadvertently omitted from the original report.” The total dollar amount of these five newly reported expenditures was $32,675.83, which almost exactly equaled the $32,716.54 identified as unaccounted for in The Austin Bulldog’s investigative report.

Those expenditures were listed as payments to four of Leffingwell’s campaign consultants (one of which prepared Leffingwell’s Campaign Finance Reports) and a payment for printing, postage, and mailing of a political postcard that alone cost more than $24,300, according to the Affidavit.

Some may question the filing of a lawsuit over what the mayor contends are merely clerical errors. But the law is clear.

In each Campaign Finance Report submitted, a candidate or officeholder must personally sign an affidavit and swear or affirm under penalty of perjury that the reports are true and correct and include all information required to be reported under the Election Code.

The Texas Ethics Commission’s Instruction Guide for completing Campaign Finance Reports warns: “As a candidate or officeholder, you alone, not the campaign treasurer, are responsible for filing this form. Failing to file a report on time or filing an incomplete report may subject you to criminal or civil penalties.”

The bottom line is the Election Code requires timely filed reports to be complete and accurate. Leffingwell’s reports were grossly defective.

In addition, ignorance of the law is not viewed by the courts as a means to avoid responsibility.

The Texas Supreme Court ruled, in Osterberg v. Peca: “In this case we conclude that a candidate who seeks to enforce Texas Election Code reporting requirements is not required to prove that persons making unreported expenditures against the candidate knew they were breaking the law.”

The same decision states, “A defendant could avoid civil enforcement simply by refusing to learn the election laws. The resulting rule would do violence to the general proposition that ignorance of the law is no defense.”

Aleshire’s letter states, “You may have just made a careless mistake swearing to the correctness of what turn(ed) out to be fairly obvious false campaign finance reports, but there are people every day appearing in the Austin municipal courts who must pay for careless mistakes they made. Even though—or perhaps especially because—you are the Mayor of Austin, you are not immune from accountability, and you should pay for your careless mistakes in this case.”

Brigid Shea, who also ran against Leffingwell in 2012, like Dafoe, has standing to sue Mayor Leffingwell for damages related to his defective Campaign Finance Reports.

She could not be reached this morning or early afternoon for comment.

Shea has previously told The Austin Bulldog, “I don’t have any plans at this point to bring any legal action.”

Shea has also told The Austin Bulldog she will be a candidate for the Place 2 Travis County Commissioner’s Court seat now occupied by Sarah Eckhardt, who has said she will not run for reelection.

Despite the fact that collecting damages from Leffingwell would likely pay off the $44,340 in campaign debt she carries from her 2012 mayoral run, to sue the mayor would put her even more at odds with him as she contemplates the commissioner’s race, and alienate his supporters as well. 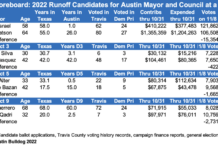 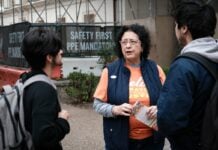