Among the half-dozen candidates on the July 14 special-election ballot for State Senate District 14, incumbent District 51 State Representative Eddie Rodriguez (D-Austin) has a huge lead in fundraising. 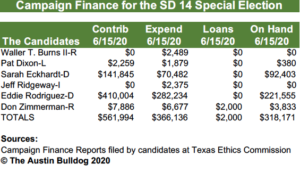 The accompanying chart reflects each candidate’s funding based on campaign finance reports filed by the candidates June 15, 2020, with the Texas Ethics Commission.

Rodriguez has raised more than $410,000 and spent more than $282,000. He got a big head start on fundraising by having an opponent in the Democratic Primary. He was able to carry over about $100,000 from that election for use in the senate race.

Sarah Eckhardt, who on March 10, 2020, resigned her job as Travis County Judge to jump into this race, is the only other candidate to raise significant sums. She reported receiving $141,845 in contributions.

Shudde Fath, Austin’s best known centenarian and a veteran volunteer who served as a member of the City’s Electric Utility Commission for some 40 years, gave Eckhardt’s campaign $1,000.

The other four candidates on the ballot for this special election—two Republicans, a Libertarian and an Independent—have raised or spent minor sums (details at the bottom of this story).

Eckhardt reported that that her senate campaign fund received a $25,369 contribution from the officeholder account she had maintained as Travis County judge.

But her report raises a red flag because the report also lists the same $25,369 as an expenditure.

In a brief telephone interview with Eckhardt Tuesday evening, she said the report was prepared with the assistance of attorney Doug Ray, a partner in the law firm Ray and Wood.

“We wrestled with how to report the funds properly,” Eckhardt said.

Contacted at his office Wednesday morning, Ray directed attention to the footnote on the last page of the report, which states:

“Although not required to fully disclose the transition to the Senate Campaign, we are including the internal transfer of funds from Sarah Eckhardt County Judge Officeholder Account to Sarah Eckhardt Senate Campaign by including it as a contribution received and a corresponding expenditure of these funds. This does not affect cash on hand.”

The Austin Bulldog downloaded the electronic data on Eckhardt’s campaign finance report from the Texas Ethics Commission, analyzed it, and determined the footnote is accurate. Cash on hand was not affected.

Bottom line: treating the transfer of funds from the officeholder account as both a contribution and an expenditure for the senate campaign, is an instance of overreporting. However well intentioned, the entries cause confusion for anyone examining the report. Her report appears to be otherwise accurate.

Eckhardt’s senate campaign previously tripped up by soliciting and accepting contributions before appointing a campaign treasurer.

The Austin American-Statesman reported April 16, 2020, that after announcing her resignation as county judge March 10, 2020—and before appointing a campaign treasurer for her senate campaign—she began soliciting campaign contributions on her website for the state senate race and also sent emails asking for money.

State statutes requirement a treasurer be appointed before soliciting or accepting donations.

She told the Statesman that she was preoccupied with steering the county through the coronavirus pandemic and had forgotten to appoint a treasurer. The report added that after learning about the problem, Eckhardt on April 8, 2020, filed a report with the Texas Ethics Commission to name her treasurer (Carol Hatfield, who has served as treasurer for Eckhardt’s county judge campaigns).

The report said Eckhardt had returned donations received before the treasurer’s appointment, “which she estimated at $5,000.”

The Austin Bulldog’s examination of the report indicates that all 38 contributions listed were made in the months of January, February and March. Meaning the entire $11,435 should have been returned to donors.

The other four candidates running for the state senate seat raised and spent tiny sums.

Republican Waller Thomas Burns II of Austin accepted no contributions but spent $2,489 of his own money on his campaign.

Burns ran for Place 4 on the Austin City Council in May 1996 and placed fifth in a seven-person field. (Beverly Griffith won the runoff.)

Dixon also filed a contribution report in 2012. He told The Austin Bulldog that was the year he had a challenger for his position as state chairman of the Libertarian Party. He said he won reelection and wound up serving as state party chair from 2004 to 2014.

Independent Jeff Ridgeway of Austin accepted no contributions but spent $2,375. Ridgeway told The Austin Bulldog he is not doing any fundraising but hopes people will be excited about having an independent on the ballot. His campaign budget is what he would’ve spent on a family vacation he can’t take because of the quarantine, he said.

Ridgeway is a medical doctor who said he’s practiced in the Austin area for 14 years. His specialty is maternal and fetal medicine. He said he works closely with OB/GYN physicians who refer high-risk pregnancy patients who need help to keep the mother and fetus healthy, for example expectant mothers who have diabetes or are expecting twins.

Zimmerman was elected to the Austin City Council District 6 in 2014 by beating Jimmy Flannigan in a runoff. In a 2016 rematch, Flannigan won the seat.

When Zimmerman was running for City Council in 2014 The Austin Bulldog published an investigative report that included court records of him having injured and alienated his daughter. A court order states “Respondent (Zimmerman) has a history and pattern of physical and emotional abuse directed against (his daughter).” The court records of the 2014 proceedings contain no evidence that Zimmerman contested the allegations. In fact, Zimmerman signed the agreed order beneath the statement: “Approved and consented to as to both form and substance.”

No other Austin news organizations published that information.

Zimmerman sued the Bulldog for defamation and after two court hearings the Bulldog won a judgment of $10,000, which he eventually paid off in installments. The court concluded that Zimmerman’s lawsuit against The Austin Bulldog was prohibited by the state’s Anti-SLAPP statute and violated the Bulldog’s right of free speech related to a matter of public concern.

Soon after being sworn in as a council member, Zimmerman sued the City of Austin to overturn campaign finance restrictions. Contributions limit imposed by the City Charter were upheld. The Charter restriction that prohibited fundraising from starting no sooner than six months before the election was overturned. 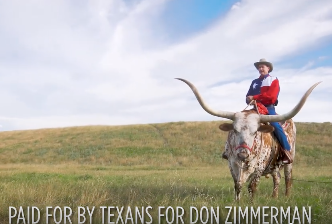 Zimmerman has a knack for attracting attention to his campaigns.

He published a short video ad on Facebook June 16, 2020, in which he appears sitting atop a longhorn steer and said he promises to “Keep Texas Open.”

The ad ends with Zimmerman picking up the cow patties dropped by the steer and tossing them into the same open field in which he and the steer are standing.

The cow-patty relocation project was a success, although it’s not clear what sort of “mission accomplished” that was supposed to represent.

This story was updated at 7:12pm Thursday June 18, 2020, to correct a name, which is Russell Kelley, not Kelley Russell. In addition Shudde Fath’s name and photo was added to the story.

Ken Martin has been covering local government and politics since 1981. In the last dozen years of his Marine Corps career Ken was a financial accounting officer. See more about Ken on the About page.