Updated at 8:16am January 29, 2020, to clarify the deadline for candidates on the March 3 ballot to file Personal Financial Statements. Also to correct a statement that mistakenly implied that Garza, a Latina growing up in Bexar County, should be able to speak Spanish.

Attorney Bill Aleshire has once again attacked Mayor Pro Tem Delia Garza, this time over a half-dozen expenses that she paid for out of her council office budget. 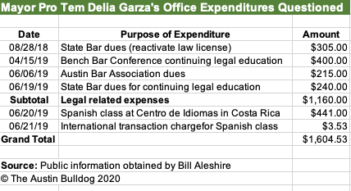 Collectively the charges he criticized add up to $1,604. (See related chart.) Although that’s a small figure he believes city taxpayers should not have to pay for charges related to reinstating and maintaining her law license and taking a week of Spanish classes in Costa Rica.

“Call me old-fashion,” Aleshire said, “but I think it is highly improper, if not illegal, to have taxpayers pay the personal Bar license fees or CLE (continuing legal education) expenses of a City Council member when having a Bar license is not required for the job.”

In a telephone interview late Tuesday afternoon, Garza said, “It’s common for employers to pay for people’s professional licenses whether using it or not. I’m an attorney.

“If it were not ethical or not allowed, the city would not have paid for it,” she said.

The City’s Public Information Office confirmed what the records obtained by Aleshire showed, that the City did pay for these expenses. But given the late afternoon contact from The Austin Bulldog the public information specialist was unable to reach city officials who could comment on the appropriateness of the expenditure.

The Austin Bulldog’s calls to City Attorney Anne Morgan were not returned Tuesday evening. Nor was a call to City Council Member Ann Kitchen, who is also an attorney, to find out if her bar dues and continuing education expenses are paid for by the City.

“On one hand I’m being criticized for not practicing law,” Garza said, referring to her thin legal resume for someone seeking election as the Travis County attorney. “I returned to active practice so I could provide pro bono legal advice” to women preparing for asylum hearings.

After this story was published, Immigration attorney Kate Lincoln-Goldfinch, who organizes trips to detention centers where asylum seekers are being held, told The Austin Bulldog that Garza “has gone on one visit with us.”

According to the State Bar of Texas website in May 2010 Garza graduated from Gonzaga University Law School in Spokane, Washington. Garza filed a Statement of Financial Information with the City of Austin April 23, 2015, which indicated that in 2014 she had an outstanding loan for law school of $100,000 or more at 7.85 percent interest. Subsequent Statements of Financial Information for the years 2015 through 2018 contained the same information. The report for 2019 will be due April 30, 2020.

But for candidates on the March 3 ballot, Personal Financial Statements required by state law must be filed with the County Clerk by February 12, 2020. County Attorney David Escamilla pointed that out after reading the original story.

Garza was employed as an assistant attorney general for 27 months, from April 1, 2012 to September 5, 2014, according to her personnel file from that agency. She received two promotions during that time, the last just three months before she resigned.

In her application for that job Garza indicated she graduated from Texas A&M University with a bachelor’s degree in journalism.

The employment history Garza submitted for the AG’s position indicated she had been managing attorney for Goodwill Staffing Services since September 2011, for six months before becoming an assistant attorney general. She was a self-employed attorney from May 15 to September 1, 2011. She served as a law clerk with the Texas Civil Rights Project from January to September 2010. Before that she was a law clerk for a Spokane law firm and for Gonzaga University’s Legal Assistance office.

The functions listed in the job description for Assistant Attorney General lll—the highest position she achieved—states an attorney in this position “Performs moderately complex work for the Child Support Division. Work involves representing the state’s interest in judicial and administrative matters, and providing legal advice, consultation and technical assistance to the Child Support Division and staff. Works under general supervision, with limited latitude for the use of initiative and independent judgment.”

Garza didn’t practice law from June 1, 2015 (five months after being sworn in as a city council member) to August 24, 2018, according to a State Bar of Texas form for Minimum Continuing Legal Education that she signed under penalty of perjury.

Garza also signed a Request for Inactive Status November 18, 2015, effective October 1, 2014. She checked, “I do not hold a position that requires a law license” and further, under penalty of perjury, certified that she had not practiced law from October 1, 2014 through present.

Cecelia Burke, a former Travis County tax assessor-collector for six years, ran the Attorney General’s Child Support Division from 1991 to 1999, she said. She noted that child support is a federal program under Title IV-D of the Social Security Act of 1975.

At a candidate forum hosted by the West Austin Democrats January 9, 2020, Burke stood up to address a room packed with Democrats who would be casting ballots for endorsing candidates for county attorney and other offices. Burke, who’s backing Laurie Eiserloh for county attorney, said that her choice was “27 years deep with experience in the law.”

Referring to Garza, Burke said, “You don’t jump to the top of a law firm because you have political skills.”

Candidates were not allowed to speak at that meeting but in other candidate forums Eiserloh said the County Attorney’s Office has 237 employees and a budget of $23 million.

Aleshire’s other objection to Garza’s office expenditures are related to spending $441 to pay to register her for a five-day Spanish class in Costa Rica from July 8 to July 12, 2019,  plus a few dollars for an international transaction fee.

Her inability to speak Spanish fluently was noted in her job application when she applied to be an assistant attorney general. The job application dated March 1, 2012, states, “I speak a little bit of Spanish.”

Wanting to speak Spanish better would be handy in District 2. The City Demographer’s website indicates that 69 percent of the district’s population was Hispanic in 2010, the latest census figures compiled.

But it is interesting that she chose to attend that language training five and a half years into her time on the council, and just five months before filing to run for county attorney.

Garza’s fallback: she could stay on the council

Although Garza is running for county attorney while still serving on the City Council, she has announced she will not seek reelection to the District 2 seat. But that could change if she doesn’t win the county attorney’s job. She would not be term-limited when her current council term ends December 31, 2020. She would be eligible to run for another four years in that position without resorting to a petition drive to get on the ballot.

Garza won back-to-back elections to the city council, albeit against weak and underfunded candidates in a district with a poverty rate of 24.8 percent and fewer than 18 percent of adults with a bachelor’s degree, by far the lowest of any council district, according to composite socioeconomic data published on the City Demographer’s website.