The Austin Bulldog
HomeCity of AustinHalf the mayor and council candidates haven’t filed for a place on...
City of AustinElections

People declare themselves to be candidates for office when they file with the City Clerk to appoint a campaign treasurer. But they aren’t able to get their names on the ballot for the November 8th mayor and city council races until they file an application to do so.

Ballot applications contain the following statements and must be sworn under oath and signed by the candidate:

“I, (name of candidate), of  (name) County, Texas, being a candidate for the office of (insert name of office), swear that I will support and defend the Constitution and laws of the United States and of the State of Texas. I am a citizen of the United States eligible to hold such office under the constitution and laws of this state. I have not been determined by a final judgment of a court exercising probate jurisdiction to be totally mentally incapacitated or partially mentally incapacitated without the right to vote. I am aware of the nepotism law, Chapter 573, Government Code. I am aware that I must disclose any prior felony conviction, and if so convicted, must provide proof that I have been pardoned or otherwise released from the resulting disabilities of any such final felony conviction. I am aware that knowingly providing false information on the application regarding my possible felony conviction status constitutes a Class B misdemeanor. I further swear that the foregoing statements included in my application are in all things true and correct.”

Once a ballot application has been filed and reviewed the City Clerk posts them to the city’s website.

City Clerk Myrna Rios confirmed Thursday afternoon via email that the website where ballot applications are posted “is up to date.”

The Austin Bulldog sought that confirmation because in reviewing the applications so far filed, not one of the eight people who appointed a campaign treasurer to run for the District 9 seat has filed an application. As it turns out, a total of 17 candidates have not filed a ballot application yet.

The deadline to file a ballot application is 5pm Monday, August 22nd, according to information published in the Candidate Packet. 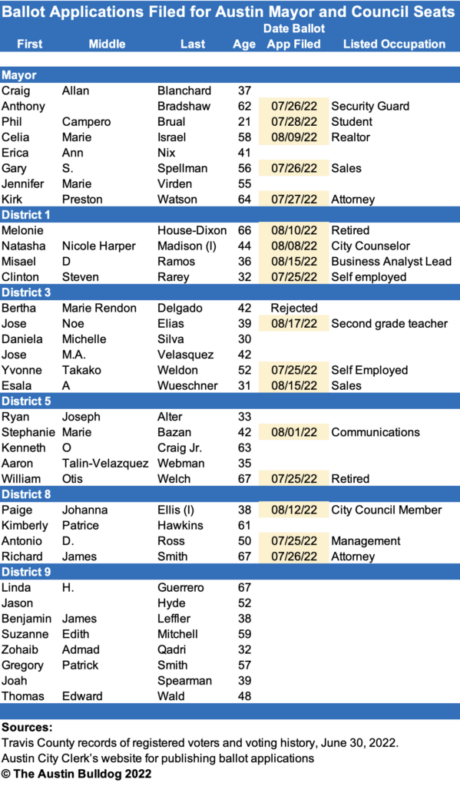 Seventeen of the 35 would-be candidates have filed to get their names on the November 8th ballot. (See accompanying chart.) That number includes two last-minute filers who did not appoint campaign treasurers until August 15th:

Who hasn’t filed, who tried and failed

The most high-profile candidate who has not yet filed a ballot application is mayoral candidate Jennifer Marie Virden. She appointed a campaign treasurer more than a year ago on June 23, 2021, and kick-started her campaign with a $300,000 loan.

District 3 candidate Bertha Marie Rendon Delgado had her first ballot applications rejected, as the Bulldog reported August 12th. Since then she filed another application that also was rejected. She is scrambling to obtain documentation that she has “been released from all resulting disabilities.” There are three options: judicial clemency, executive pardon, or restoration of rights.

Attorney Bill Aleshire has been helping Delgado in trying to resolve this problem. In an email late this afternoon, he said, “We should hear from the judge tomorrow morning on the Clemency Order. If she gets that Order, the City Clerk will be out of excuses to keep her off the ballot.”

In describing the clemency process, Aleshire said the judge has “broad authority to do justice for deserving ex-felons.”

(Disclosure: Aleshire represents The Austin Bulldog in obtaining information through public information requests and assists in other legal matters).

Ballot applications are posted on the City Clerk’s website, where they are listed in alphabetic order for each of the six positions on the ballot.

Candidates have voting records too, August 11, 2022

Facebook
Twitter
Previous article
Cosmetics executive runs for mayor on message of unity, ‘cooperation’
Next article
Delgado will not be on the District 3 ballot