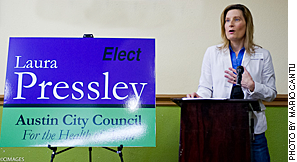 Laura Pressley kicked off her campaign December 10 vowing not to let the so-called “gentlemen’s agreement” that resulted in having one African American and one Latino on the council stop her from opposing a minority member of the City Council.

At Friday’s press conference she proved it. She announced she is targeting incumbent Mike Martinez, who was first elected in 2006 and is now seeking a third term.

Martinez did not return a request for comment left on his council office recorder. His campaign website provides no telephone number.

Martinez has raised $70,460 for his re-election bid and had $64,654 in the bank as of December 31. He has campaign kickoff fundraiser scheduled for Wednesday at Nuevo Leon Mexican Restaurant, 1501 E. Sixth St., starting at 5:30pm.

Pressley raised $3,100 and had $2,332 in the bank through December 31. She has not yet hired a consultant or campaign manager.

Unlike many of the winning candidates in recent council elections, she does not plan to loan her campaign money. “If people don’t support us we will not win,” Pressley said, adding, “I have a lot of donors waiting for us to declare against Martinez.”

In her press conference Pressley said there were concerns about her going against the gentlemen’s agreement from the 1970s but, “We’re not in the seventies anymore. Designating one seat (for a Latino) is a serious limitation.

“There should be two or three Latino seats if we get real geographic representation in this city. We really support the 10-1 plan.” She was referring to the proposal initiated by Austinites for Geographic Representation, a grass-roots citizens initiative to get on the ballot a proposition to establish a nonpartisan Independent Citizen Redistricting Commission that would draw 10 council districts that the Austin City Council would have no choice but to adopt. The group’s plan calls for only the mayor to continue being elected at-large.

“Over the years Mike Martinez has done very little to help the Hispanic community,” Pressley said. “We need a change at City Hall—regardless of skin color—and directly do what’s important for East Austin and all of Austin.”

About a dozen attended the press conference, many of which were Latinos. All said they’re fed up with Martinez, including long-time East Austin activists Marcelo Tafoya, Gavino Fernandez, Jose Quintero, Fidel Acevedo, and a younger Danny Perez. All professed strong support for Pressley and no concern about the fact that her victory would displace the council’s only Latino.

Interviews with some of them, before the press conference at the YMCA Learning Center at 2121 E. Sixth Street, revealed a deep resentment over what they perceive as Martinez’ lack of attention to problems.

“It doesn’t matter,” Quintero said of the idea a white woman might beat Martinez. “He’s not helping us.”

Tafoya agreed, saying, “We decided a while back to get rid of ‘Evil Knievel.’ We decided that the gentlemen’s agreement is BS. It hasn’t served the minority community at all.”

Tafoya, a former district director for District 12 of the League of United Latin American Citizens (LULAC), said the minority members of the council were “never elected by us, they never represented us, and never even considered us. They make token gestures and the council votes against us. We’re sick and tired of it.”

Pressley said she met with Latino community members in December and kept it quiet. “We would not do this without Hispanic support.”

Pressley criticized Martinez for being part of a council that has subsidized large companies and developers. “Growth should pay for itself,” she said. “Subsidies are absolutely wrong.”

She also criticized his support for the construction of Water Treatment Plant 4, which was approved by a narrow 4-3 council majority.

Pressley said “police misconduct” is going on and “no one on the council is talking about holding police accountable.”

Like many candidates before her, Pressley said she would work to reduce the cost of government and make it more efficient.

Unlike most candidates, she claims to have had significant experience doing that, which she gained during her 17 year career in the semiconductor industry. “I was a gross-margin manager for a billion-dollar company,” she said. In a follow-up interview she said the she worked for Motorola spinoff Freescale Semiconductor in its computer networking division. “My job was to define cost reductions and efficiency projects with engineering teams in Austin and Malaysia to improve productivity.” She held that job from 2006 until she left in early 2011, she said.“I worked for Freescale from 2006 to 2011 as an engineer and engineering manager, and was the gross-margin manager from 2010 till early 2011,” she said in a follow-up e-mail. (Clarification posted January 22, 2012 1:30pm.)

She said that city departments—particularly its revenue-generating utilities—should be striving for year-over-year cost reductions of 10 percent, just like Austin’s high-tech companies that compete with Asian companies.

She said she would “oppose and say no to waste in Central Health,” the agency responsible for providing healthcare to low-income residents of Travis County. “It takes three to four weeks to get an appointment,” she said of the agency’s clinics. She vowed to replace Central Health board members (four of which are appointed by the city council) who don’t work to provide better services.

“I will vote ‘no’ on contracts awarded to companies outside of Austin,” Pressley said.

Picking up on one of her long-running issues, she said she would stop spending $500,000 to $1 million a year to add fluoride to the city’s drinking water. “LULAC told them no and they’re not listening,” she said, the group’s resolution to stop fluoridating tap water.

When responding to a question from a critic of the city’s Planning Commission, Pressley said, “We need to be strategic about appointments. Council members are keeping the same people. We need people who will speak up and do the right thing.”

Pressley, who said she had lived in Austin 23 years, is a survivor of domestic and sexual violence, and came to Austin to work her way through graduate school as a single mother. The University of Texas registrar’s website indicates her first semester was the fall of 1988 and she earned a doctorate majoring in chemistry in 1994.

In 2007 she co-founded Pure Rain LLC, an Austin-based company that sells bottled rain water. She travels extensively to market the water, which is sold locally at Whole Foods and Central Market, according to the Pure Rain website.

Pressley is a current steering committee member for Texans for Accountable Government, an Austin-based nonpartisan political action committee that focuses on safeguarding individual liberty, protecting personal privacy and property rights, election integrity, safe water, and electing representatives to office, according to its website.

She is also on the steering committee for Fluoride Free Austin and has served on the boards of several nonprofit organizations, including SafePlace, which operates a 24-hour hotline and an emergency shelter for women and children escaping domestic violence; Women’s Advocacy Project, which gives legal advice to victims of domestic violence; and served as volunteer Development and Fundraising Chair of the DiscoverHope Fund, which creates opportunities for women in poverty through microcredit, entrepreneurship and training.

Pressley is married to Leif D. Allred, an engineering manager at Applied Materials. The couple owns a home at 2210 White Horse Trail, just a few doors down from Lamar Middle School in the Allandale neighborhood. Pressley said she has one daughter, 26, who lives in Seattle.

To learn more about Pressley visit her campaign website.