Last-Ditch Effort to Save Sendero

Central Health’s Board of Managers will hold a special-called meeting this Saturday, September 22, starting at 1pm at 1111 E. Cesar Chavez St.

The purpose is to give the managers a chance to reconsider their 4-3 vote taken at 10pm September 12 to wind down Sendero Health Plans Inc., which provides health insurance plans under the Affordable Care Act for some 24,000 low-income members in eight counties. The Austin Bulldog’s report of September 17 detailed the emotionally charged debate that brought about the wind-down vote.

A key point in the backlash over the decision is the agenda for that Board of Managers meeting gave no clues about the drastic action it might take: “Discuss and take appropriate action on an update regarding Sendero Health Plans Inc., including the effect of federal legislative and regulatory changes. (Action Item)” Thus, the decision was made with zero public input.

Citizens Communication about Sendero’s fate will be allowed at this Saturday’s meeting. To speak you first must sign-in first and provide your name, address, and organization. Each speaker will have three-minutes. You may also provide written feedback on Central Health’s website before the meeting starts. The meeting will be streamed live on Central Health’s website and on the agency’s YouTube channel.

While public comments have been invited this time, the overarching question is whether pressure to reverse the wind-down decision will change anything. For the Board of Managers to again debate the matter hinges on the rules of parliamentary procedure, the body of rules that govern meetings.

Ted Burton, vice president of communications for Central Health, said in an email, “A motion for reconsideration must be made by a member who voted with the prevailing side.”

That puts the pressure on four members of the Board of Managers: The motion to allocate $4 million to fund Sendero’s winding down, in addition to the $20 for Sendero already approved in the FY19 budget, was made by Manager Katrina Daniel, seconded by Manager Sherri Greenberg, and supported by Managers Shannon Jones and Maram Museitif.

If none of those managers move to reconsider, the board’s previous decision stands, unless a manager moves to suspend the rules and that motion passes to open debate.

Regardless of what the Board of Managers does Saturday, the Travis County Commissioners Court will again consider approving Central Health’s FY19 budget and tax rate at its next meeting, Tuesday September 25, said Peter Einhorn, chief of staff for County Judge Sarah Eckhardt.

The Commissioners Court was scheduled to do that at the September 18 Commissioners Court meeting. Instead it spent an hour and a half listening to people complaining about the wind-down that would force Sendero’s members to seek insurance from a for-profit insurance company that would likely charge higher premiums and offer a smaller network of service providers.

Despite what at times were highly emotional personal stories about how their lives would be hurt if Sendero’s insurance programs are no longer available, Judge Eckhardt made her position clear by declaring she would support whatever decision the Board of Managers makes.

Commissioner Margaret Gomez seemed to favor Sendero’s proposal to move the sickest members, voluntarily, from the Managed Access Program to Sendero, a move that would enable Sendero to draw down federal funds from the risk-adjustment pool instead of paying in because on average it’s members are not sick enough. For that reason, Sendero paid $78 million in risk adjustments over the last two years.

Commissioner Jeff Travillion said that he wanted to “see the numbers” side-by-side to decide which alternative would be best, that is, to move the MAP members to increase federal funding or wind-down Sendero’s operations because of the perceived financial risks.

Commissioner Brigid Shea was absent Tuesday. But proponents of continuing Sendero operations will be glad to know that Shea, a strong proponent of moving sick MAP patients to Sendero and drawing down significantly more federal funds via the risk adjustment, will be back from out of town Monday, according to her office.

She will attend Tuesday’s Commissioners Court meeting where Sendero’s ultimate fate will be decided. 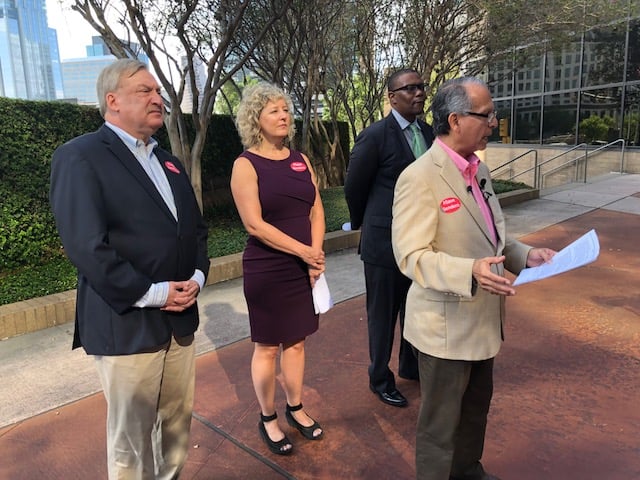 Central Health’s special-called meeting was the result of vocal opposition that rose up immediately after that Board of Managers wind-down decision was made. Sendero’s fans were not only outraged by the decision but also dismayed the decision was made at 10pm under an agenda item that did not indicate the managers were considering such drastic action.

But, after a closed-door executive session of some two and a half hours, in open session the managers voted to do just that.

The stated goal for the press conference was to get the Commissioners Court to allow Sendero to continue serving its members with affordable health insurance through the 2019 budget cycle. That would allow time for holding additional public hearings and discussions in following months about whether Sendero should continue operations or be phased out.

Via email, Ted Burton responded to Ortega’s criticism of the $8 million to be spent on Red River Street, saying, “Re-alignment of Red River Street is part of the Downtown Campus (Brackenridge) redevelopment. Redevelopment of the Downtown Campus will generate hundreds of millions of dollars in revenue over nearly a century to pay for health care services in Travis County. As part of the project, Red River must be re-aligned to accommodate future redevelopment.”

At the press conference Ortega referred to the reports provided by actuaries hired by Central Health to analyze the risks of moving sick MAP patients to Sendero. He said if that happens, “Sendero will become financially stable and will no longer require investment from Central Health.”

“This program maximizes federal dollars to improve healthcare for a vocal and visual cohort of Austin’s working poor—these are the musicians and professionals working in live music who draw tourists and talent to our city,” she said.

Alden said these healthcare recipients enjoy low-deductible, low co-pay healthcare that encourages prevention and proactive response to health issues before they escalate, and diverts them from using an emergency room for their primary healthcare. Before the Affordable Care Act and Sendero Health Plans, she said, these people had to rely on benefit concerts and GoFundMe campaigns when disaster struck and only saw doctors when in desperate circumstances.

“Without Sendero, we return these individuals to an uncertain future,” she said. “Our neighbors are in jeopardy of losing healthcare coverage completely if we allow this program to die.”

Board to Sendero: Drop Dead: Wind-down order despite professional advice that moving sick patients would stabilize finances, Part 11 in a Series, September 17, 2018

Sendero Turnaround Plan in Limbo: Sendero Health Plans has an attractive turnaround strategy but it’s not clear Central Health will commit, Part 10 in a Series, September 9, 2018

Email [email protected]. This is his 12th article about Central Health and indigent healthcare arising out of his ongoing investigation that begin in early 2017.

An alphabetic list of donors who have contributed to The Austin Bulldog since the organization was formed in 2009 and the cumulative amount each person has given through August 28, 2018, are listed on the tax-deductible contribution.