City spent more than $20,000 for a two-hour party leading up to track events 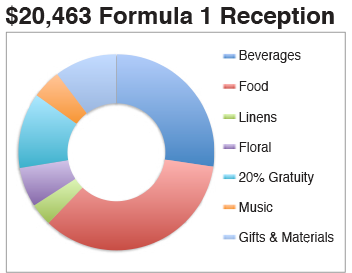 Austin’s first Formula 1 event November 16-18, 2012, drew more than 100,000 people to attend the grand finale. By all accounts the race itself was a major success, though news reports indicated some downtown businesses suffered from the impact.

Two days before the race events started Mayor Lee Leffingwell hosted a lavish reception at City Hall in honor of this county’s first Formula 1 race in many years.

The city spent more than $20,000 for two-hour event billed as the Mayor’s Formula 1 Reception that started 5pm Wednesday, November 14, according to records obtained by The Austin Bulldog through a public information request.

An F1 race car was brought in and displayed and a photographer was hired to take pictures of guests by the exotic vehicle. Food and bar drinks were free for the taking. Three bands provided entertainment.

When a billionaire’s coming to your party you probably want to serve something a cut above the fare you would normally lay out for a few friends and neighbors.

The City of Austin certainly did that.

Although attendees said that crab was among the “custom hors d’oeuvres” served for the reception, the specific kinds of food included in the menu are not specified in the invoices. The Austin Bulldog has submitted an additional public information request to obtain more details.

The Austin Convention and Visitors Bureau picked up 85 percent of the tab for $17,367, while the city’s Economic Growth and Redevelopment Services Office paid the remaining $3,096.

“Several of us were commenting about how opulent it was compared to the average reception,” Spelman said. “It was consistent with the rest of the F1 stuff we’ve been doing but it seemed more opulent than most city parties.”

Council Member Laura Morrison, when asked about the reception expenses, took a broader view in her response. She issued a statement saying, “We need a final comprehensive report on Formula One that includes not only tax revenues generated, but that also examines all costs to the city.

“The city expended tremendous resources during the months of preparation prior to the race as well as during the event week, including a significant amount of staff time. It’s imperative that we get a clear picture of all expenses and revenues in that final report,” Morrison said.

“The Convention Center budget is a huge and growing slush fund, and its use for the F1 reception is an example,” Aleshire wrote in an e-mail. “The amount of money they spent for (alcoholic) ‘beverages’ alone at the mayor’s reception equals the amount some average homeowners paid in their total annual property taxes this year.

“It’s disgusting to see such a Roman feast going on inside the halls of government when families are struggling so hard to afford to live here. Mayor ‘Nero’ fiddles while the tax bills burn a hole in working family budgets across this city.”

Tom “Smitty” Smith, director of Pubic Citizen Texas, a consumer and environmental organization, at first said the total expenditure of more than $20,000 was “an obscene waste of money,” but softened his criticism somewhat when told that most of the expense was paid for by the Austin Convention and Visitors Bureau.

“Even spending $3,900 of city money coming from the Economic Growth and Redevelopment Services Office on a party—on top of all the money the city has given them—is ridiculous,” Smith said.

“They ought to throw the City of Austin a party in gratitude for all the damage they’ve done to the city with Formula 1 and the effect they’ve had on suppressing businesses downtown,” Smith said.

For a detailed look at line item expenses, a recap by category, and a graphic illustration, click on the Mayor’s Formula 1 Reception Spreadsheet.

To see the actual bills and receipts click on the Formula 1 Reception Invoices.

Taxpayers Sue to Stop State Comptroller From Paying Tax Funds to Formula One Promoters: Lawsuit Questions Whether Formula One Qualifies for Subsidies Under State Law, June 22, 2011