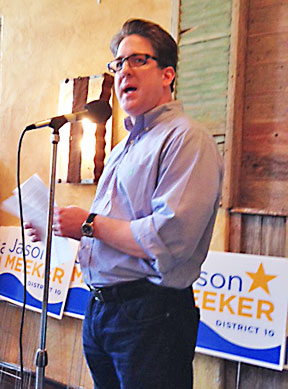 Jason Warren Meeker launched his bid for the District 10 City Council seat Sunday June 22 at the Waterloo Ice House in northwest Austin with some 16 adult well-wishers on hand and a total of 26 who signed in at some point during his two-hour appearance.

Meeker, who heads marketing communication firm Meeker Marcom, roused his backers with a stump speech that quoted Abraham Lincoln quoting the Bible, saying, “A house divided against itself cannot stand.”

“Here in Austin we’ve been divided politically for far too long and even today the power is too concentrated, it’s too deaf and too blind to the concerns of the people of Austin,” Meeker said. That changed in 2012, he said, when 60 percent of Austin voters approved the election of city council members from 10 geographic districts, a new system that will take effect in January, after the November 4 general election and December 16 runoffs.

“We’re about to witness a new experiment in democracy that will unite our city. Not just 10 different districts, but one city united, represented equally, a house united—and that’s why I’m running.”

Meeker, 45, has served on the City of Austin’s Zoning and Platting Commission since being appointed in October 2011 by City Council Member Laura Morrison. In that capacity he said he has earned a reputation as being “tough but fair in my decisions affecting homes, businesses and neighborhoods growing throughout our city.”

In 2008, Meeker tried to unseat then incumbent City Council Member Lee Leffingwell, who was running for reelection. Meeker netted 22.65 percent of the votes and placed a distant second while Leffingwell breezed to another term before running and winning the mayor’s job in 2009.

This time around Meeker is aiming for one of the council seats to be filled by people who live in newly drawn geographic districts. As of Monday, 66 people had appointed campaign treasurers to indicate they are running, five for mayor and the rest for City Council. Seven of those are Meeker’s opponents also seeking the District 10 seat he wants to fill.

Meeker noted he lost the first bid for a council spot but took credit for staying involved in city politics by helping to lead Responsible Growth for Northcross (RG4N), a grassroots group that succeeded in getting retail giant Walmart to vastly reduce the size of its new store in Northcross Mall.

He said he helped originate two campaign ethics laws that were sponsored by State Representative Elliott Naishtat and State Senator Judith Zaffirini and signed into law in 2009. When asked for clarification later, Meeker pointed to HB 3216 and HB 3218, both of which pertain to the Texas Ethics Commission. HB 3216 requires immediate notification via telephone or e-mail to respondents of complaints filed against them. HB 3218 requires a complainant to provide identifying information for both the complainant and respondent and requires that to be eligible to file a complaint a person must be a Texas resident. “This effort was meant to end the common political dirty trick of putting out a press release that claimed that an ethics complaint had been made when none actually had been,” Meeker said in an e-mail.

In his speech, Meeker said that in 2011 he helped form Responsible Water, a group that opposed construction of Water Treatment Plant 4. He said in 2012 he opposed with other neighborhood leaders the Short-Term Rental Ordinance and in 2013 helped the push to keep registered city lobbyists from serving on the committee that is rewriting the city’s Land Development Code. He also opposed repeal of the city’s Project Duration Ordinance.

Meeker is currently the Sector 1 representative for the Austin Neighborhoods Council, representing Northwest Austin. As such he said he co-wrote the ANC’s unanimous resolution to raise impact fees for commercial development, which the City Council ultimately voted to do.

Among the goals Meeker wants to accomplish on the City Council is “to get (Loop) 360 moving” by removing stoplights and installing interchanges to “keep 360 flowing,” likely a popular project, as the highway bisects District 10 north to south.

Meeker also wants to increase the presence of firefighters and police in neighborhoods and be better prepared for wildfires.

“Today’s the day for us to come together and start to solve our city’s challenges. Today is the day to start getting our house in order and uniting our city. So let me declare it, I’m Jason Meeker and I’m running for Austin City Council District 10.”

Meeker was introduced by his wife, Stephanie Beasley, a senior marketing communications professional at Dell for 12 years.

“We’re all here because of a moment in 2006 when a little group, called RG4N, was just forming. Jason came home and I had a one and-a-half year old baby, so in my baby stupor he said, ‘There’s going to be this group starting in the neighborhood and they’re going to need my time. Maybe once a week, maybe twice, it’s going to be really easy.’ So I then became a single parent for a few months,” she said.

“Both of us are involved in several issues with the city, rapid growth, economy, development, education, traffic, affordability, healthcare, job growth, landmark and green space preservation just to name a few,” Beasley said. “All of this is done through his volunteer efforts, as well as mine, and he wants to make this his business. He wants to make each one of you his boss as your next city councilman.”

Meeker and Beasley’s young son, Samuel Ronin Meeker, topped off the speechmaking when, after his father, he took the mic to say, “Vote for Pops.”

Attorney Doug Young of Scanlan Buckle & Young PC attended and gave Meeker a check for $200 to help his candidacy. “I know Jason’s approach to things,” Young said. “His views aren’t affected by who’s financing his campaign—which puts him at a disadvantage with those who traditionally give the most money in campaigns.”

Young said, “He takes great positions as a member of the Zoning and Platting Commission.” He credited Meeker for being one of the leaders of the movement that kept developers from being involved in rewriting the Land Development Code.

“Jason was brilliant as an organizer in protesting a 200,000-square-foot Walmart at Northcross (Mall),” Young said. “It was cut down to 100,000 square feet and is more neighborhood-friendly.”

James B. “Jim” Duncan is an urban planner who heads Austin-based Duncan Associates. In the 1980s he was one of two urban planners who were imported by the City of Austin from Broward County, Florida. He left the city payroll in 1987 to start his own firm. Currently he serves on the Code Next Advisory Group to rewrite the city’s Land Development Code at the request of Council Member Morrison.

Duncan said he has been frustrated by the leadership of Mayor Lee Leffingwell. “They’re selling our souls,” he said.

He said he got to know Meeker through the RG4N effort that thwarted Walmart’s original plans for Northcross Mall. “I watched Jason come forward, him and Hope (Morrison), and I watched him run against Leffingwell. He’s the type of person we need on the council. He represents Austinites.”

D’Andra Ulmer for seven years worked with Meeker doing public relations for nonprofit organizations and is now “chief marketing bee” for BeeSweet Lemonade, a company started by her then six-year-old daughter, MIkaila, that sells its drink through retailers such as Whole Foods Market.

“He’s not only a good friend, he’s a good representative for the people in District 10,” Ulmer says of Meeker. “He listens. He closes his mouth and listens and doesn’t interrupt. He comes up with solutions that are innovative, practical, and effective.”

Ulmer said, “He takes the complicated and simplifies it. … The families in his district will benefit from him representing them.”

Karen Ulferts is president of the Great Hills Ladies Club and knows Meeker because he is president of the home owners association. She said the neighborhood is tightknit and uses the Nextdoor social media video system to enhance security and communication.

“He’s got passion and perseverance, even in the face of his first defeat in running for City Council,” she said. “He’s got a very good infrastructure in Great Hills.

Carol Lee is the immediate past president of the Austin Neighborhoods Council and a former member of the City of Austin’s Parks and Recreation Board. She said, “Jason is a very reasonable person who considers the facts and makes principled decisions.” She has not yet decided who to support for the District 10 race but said of Meeker, “He has integrity and principles.”

Lee described District 10 as a “jurisdictional soup bowl” that encompasses four Emergency Services Districts and five Independent School Districts. She said parts of the district have been in limited-purpose annexation since 1984. As a result, she said, those residents can vote for the mayor and council members and in City Charter elections but not for bonds.

Seven other candidates have appointed treasurers for their District 10 campaigns. They are:

Marjorie Presley “Margie” Burciaga, owner of Image Consulting Austin. Her treasurer is attorney Mindy Montford, a former Travis County assistant district attorney who lost her bid to succeed Travis County District Attorney Ronnie Earle in 2008 in a runoff with Rosemary Lehmberg. In 2010 Montford ran for the Democratic Party’s nomination for judge of Travis County’s 299th District Court and lost in a runoff with Karen Sage.

Audrey Christine “Tina” Cannon is a partner in Napkin Venture, an entrepreneurial advisory firm, and director of client relations for law firm Tuggey Calvoz LLP. Cannon ran for City Council in 2012, one of six candidates who opposed incumbent Bill Spelman. She placed third and netted 10.21 percent of the votes. Her treasurer is attorney Raul R. Calvoz.

Amanda Mayhew “Mandy” Dealey ran for an open Place 3 seat on the City Council in 2005 and placed last among four candidates with 11.2 percent of the votes. Dealey also ran for state representative in 2000, losing in the Democratic Primary to Ann Elizabeth Kitchen, who went on to win and serve one term. Dealey’s campaign treasurer is Ada Anderson, who was recently in the news for donating $3 million to Huston-Tillotson University.

William Lee “Bill” Worsham is director of coastal engineering for LJA Engineering Inc. and an analyst for the Travis County Taxpayers Union. His campaign treasurer is Greg McNeilis.

To find out what City Council district you live in, click here and enter your address.