But women have held their own at the ballot box

The men in the runoffs maintained their perfect streak of being better fundraisers than their women opponents. This is true in all four Austin City Council races to be decided in the December 13th runoff elections.

Yet the men’s money mastery did not always translate into decisive results in the November 8thgeneral election. (More about that later.) 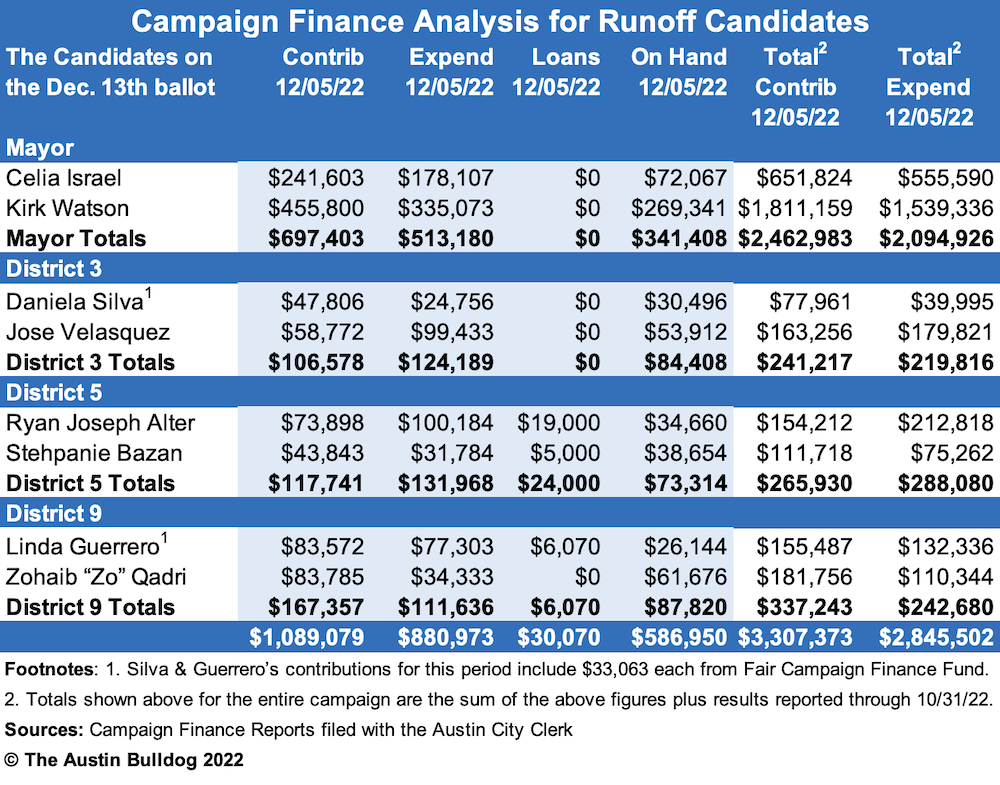 Opponent Celia Israel was no slouch, either. She netted nearly $242,000. That’s barely half of Watson’s take.

Covering his entire campaign since launching in late February, Watson has raised more than $1.8 million and spent more than $1.5 million.

Despite Watson’s overwhelming money advantage Israel managed to get 15,354 more votes than he did in the November 8th general election.

Jennifer Virden, the Republican who ran for mayor, landed more than 56,000 votes on November 8th and where the voters who backed her at the ballot box go in the runoff will play a big part in results of the Israel-Watson matchup. The other three candidates in the general election pulled a combined total of more than 20,000 votes.

While Watson retains the insurmountable advantage in resources, the most important question is whether he can pull his ashes out of the fire and douse cold water on Israel’s campaign.

Every registered voter in Austin can weigh in on who’s going to be our next mayor. Through December 6th 37,248 votes were had been cast in Travis County, 5.94 percent of the 626,942 registered.

Some residents of Hays and Williamson counties are eligible to vote in Austin’s mayoral election, too. A total of 14,252 did so in the November 8th general election.

For the whole campaign, Velasquez has taken in twice the amount of Silva’s contributions, spent more than four times as much, and had almost twice as much cash on hand through December 5th.

Here again the male candidate’s advantage in financial resources didn’t create much of a margin over his female opponent, as she pulled within 422 votes of the 7,650 votes he got in the general election.

The four Place 3 candidates who didn’t make it into the runoff got a combined 6,122 votes.

For the whole campaign Alter attracted $42,000 more in contributions than has Bazan.

Yes Bazan got 1,665 more votes than Alter in the general election.

The four District 5 candidates who didn’t make it into the runoff netted a combined 15,180 votes in the general election.

Zohaib “Zo” Qadri and opponent Linda Guerrero raised nearly identical contributions in the latest reporting period, almost $84,000 each. He did it the hard way, relying solely upon individual donations. She got $33,000 from the Austin Fair Campaign Finance Fund.

That bonus allowed Guerrero to stay close to Qadri’s total for the campaign. She actually outspent Qadri by nearly $43,000 in the last reporting period and $22,000 overall.

Qadri is the only male candidate to have created a significant margin in the November 8thgeneral election, where he led Guerrero by 2,731 votes.

That said, the six District 9 candidates who didn’t make it into the runoff netted a combined 17,144 votes.

The battle of the sexes

Should all four women emerge victorious and take office then District 4 Council Member Jose “Chito” Vela will be the last man sitting on the dais.

If all four men should pull out wins in the December 13th runoffs the council will reduce the current female dominance from 8-3 to 6-5.

Trust indicators: Ken Martin has been doing investigative reporting in the three-county Austin metro area since 1981. His aggressive reporting twice garnered first-place national awards for investigative reporting. Both of those projects resulted in successful criminal prosecutions. His 2011 investigation of the Austin City Council’s open meetings violations triggered a 21-month investigation by the Travis County attorney that resulted in the mayor and council members signing deferred prosecution agreements to avoid being charged, tried, and if convicted serving one to six months in jail and forfeiting their elective offices. See more on Ken on the About page. Email [email protected].

Related documents: The financial documents upon which this story is based are available for viewing and downloading on the Austin City Clerk’s 2022 Campaign Finance Reporting webpage.

Celia Israel in the hot seat in final stretch of mayoral campaign, December 5, 2022