Pat Berryman, who is serving in her second term as a member of the Georgetown City Council, was paid a lump sum of $13,600 by the City of Georgetown in an apparent violation of the Texas Constitution.

The payment was requested by Berryman as reimbursement of expenses from July 2008 through December 2009.

The payment is reflected in a copy of Council Member Berryman’s city payroll record obtained from the City of Georgetown using the Texas Public Information Act. 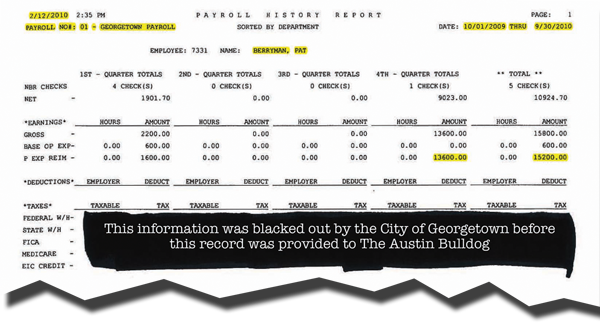 During the entire period for which Berryman claimed reimbursement, she was a state employee working for State Senator Steve Ogden (R-Bryan), according to state payroll records obtained from the Secretary of the Texas Senate through an open records request.

Section 40(b) of the Texas Constitution prohibits a state employee who is a member of a governing body from drawing a salary. A state employee serving as a council member may be reimbursed for actual expenses but must prove that the expenses equal or exceed the amount reimbursed.

Council Member Berryman has not met that requirement.

In a December 15, 2009, e-mail to Georgetown City Attorney Mark Sokolow, Berryman requested reimbursement of expenses from July 2008 through December 2009.

Berryman’s e-mail to Sokolow lists 16 items, or types of expenses. The e-mail provides no indication of the amount of expenses incurred for any or all of these items. Berryman provided no receipts for the stated expenses.

According to the minutes of the Georgetown City Council Meeting of April 8, 2008, under Agenda Item T, the council voted 7-0 to approve a change to the compensation schedule for the mayor and council members.

The new schedule was based on recommendations of a compensation committee appointed by the council to study the matter.

• An “optional stipend” of $800 a month for the mayor and council members.

To facilitate these payments, the city devised a form that provided boxes to be checked, to either accept or decline each form of compensation

A warning was printed on the form:

“Note that in some instances a City Council member may be prohibited by law from receiving any compensation.”

Council Member Berryman, a state employee, signed and dated that form on June 30, 2008. She checked “I Accept” for both types of compensation.

On July 16, 2008, Georgetown City Manager Paul Brandenburg signed a letter addressed to Council Member Berryman that informed her of issues raised by the city’s auditors as to what she could be paid:

“We have contacted legal counsel at TML (Texas Municipal League) for their opinion on this matter.

“TML advised the City that employees of the State are not eligible to receive salaries from both the State of Texas and a municipality” per the Texas Constitution, section 40(b).

“In lieu of compensation, the City will reimburse your actual expenses incurred for mileage, meals, and cell phone usage. Please provide us with your receipts for check processing through our accounts payable department and we will reimburse you.”

Council Member Berryman never supplied receipts and was therefore was not reimbursed for expenses. This was verified by City Attorney Mark Sokolow’s letter of March 15, 2010, in response to an open records request, in which he stated, “There was no further correspondence on this matter until December 2009.”

Berryman has not returned numerous telephone calls and an e-mailed request for an interview on this matter.

In response to open records requests, on March 31, 2010, City Attorney Sokolow stated in an e-mail to The Austin Bulldog:

“…if requested by the State, Council Member Berryman is quite willing to provide additional documents to state officials who so request.”

This is not responsive to the question of why neither Berryman nor Sokolow are interested in correcting a seemingly obvious violation of the Texas Constitution, as interpreted by Texas Attorney General Opinions.

In Georgetown the city attorney is one of four employees who work directly for the City Council. Mark Sokolow started his new job as city attorney on October 19, less than two months before he received Berryman’s request for reimbursement.

Tom “Smitty” Smith, director of Public Citizen Texas, said, “The state long ago recognized the difficulty of getting fair interpretations or ethical guidance from attorneys hired directly by the city council or other governmental bodies.

“The state created an ethics enforcement officer as part of the Travis County District Attorney’s office that can take action to enforce or clarify the law when a city attorney would face this kind of conflict.”

Council Member Berryman rejoined Senator Ogden’s staff upon being reinstated from Leave Without Pay on November 13, 2006. She worked continuously in that position until December 31, 2009.

Section 40(b) of the Texas Constitution states:

“State employees or other individuals who receive all or part of their compensation either directly or indirectly from funds of the State of Texas and who are not State officers, shall not be barred from serving as members of the governing bodies of school districts, cities, towns, or other local governmental districts. Such State employees or other individuals may not receive a salary for serving as members of such governing bodies….”

Attorney General Jim Mattox Opinion No. JM-1266 issued December 20, 1990, addressed the question of expenses in the context of school teachers, who are barred from receiving a salary as a city council member because employees of school districts receive a portion of their compensation from funds of the state of Texas.

Although Council Member Berryman was not a school teacher, this opinion applies even more to her situation, because all of her compensation as an employee of Senator Ogden came from state funds:

“For purposes of the quoted provision of article XVI, section 40, ‘salary’ does not include legitimate reimbursement of expenses.”

“…we do not believe that the school teacher or other salaried employee of the school district may receive compensation for serving as mayor or city council member merely by denominating a $40 or $80 monthly payment an ‘expense allowance’ rather than a ‘salary.’

On April 16, after reviewing records obtained under the Texas Public Information Act, The Austin Bulldog e-mailed Berryman at her official e-mail address, [email protected] The e-mail requested an interview and stated:

“As a result of reviewing these records, I have concluded that you may have been improperly reimbursed in violation of the Texas Constitution, as interpreted by opinions issued by the Texas Attorney General.”

Berryman has not granted an interview to answer questions.

On April 21, 2010, Berryman left two voice mail messages for The Austin Bulldog. She said she had been out of town on business trips and was headed to Arlington on another.

In these messages Berryman addressed the fact that the city manager’s letter of July 16, 2008, required her to provide receipts to be reimbursed for expenses:

“I objected to having the city staff demand that I do that when no one else had to.”
In the second message Berryman said:
“I did not think it was right or fair to be singled out by the city because the city specifically had been told by the citizens committee how they wanted this done.”
These statements do not relieve Berryman—the only state employee currently serving on the city council—of the requirement expressed in the Texas Constitution and attorney general opinions to prove that her actual expenses equaled or exceeded the amount she was reimbursed. Or at the very least to submit an affidavit—a written declaration upon oath made before an authorized official—that the actual expenses she incurred each month equaled or exceeded the $800 a month she was paid.

After being notified by the city manager in July 2008 that she needed to provide receipts to be reimbursed for expenses, Berryman waited 17 months to make her belated claim.

In the absence of an affidavit, or other proof that her actual expenses exceeded the amount of reimbursement she requested, Berryman’s claim of so-called “expenses” appears to be, in reality, a subterfuge to avoid the prohibition on being paid a salary.

The only thing that changed during that long period was that a new city attorney, Mark Sokolow, was hired shortly before she was reimbursed. And Sokolow facilitated that payment.

On May 20, 2009, upon being sworn in for her second term as a city council member, Berryman signed an Oath of Office that states:

“I, Pat Berryman, do solemnly swear that I will faithfully execute the duties of the office of Councilmember District 5 of the City of Georgetown, County of Williamson, State of Texas, and will, to the best of my ability: preserve, protect, and defend the Constitution and the laws of the United States, of this State, and of this City, so help me God.”

In this matter, it appears that Council Member Berryman has violated her oath.