A postcard funded by a new general-purpose political action committee (PAC) hit mailboxes today, aimed to undercut support for mayoral candidate Mike Martinez by pointing out he was part of the City Council investigated for violations of the Texas Open Meetings Act.

The Progress for Austin PAC’s postcard—which cost nearly $20,000—also attacks Council Member Martinez for getting taxpayers to pay the private lawyer who defended him in the ensuing investigation of the violations by the Travis County attorney and for his rash statements in e-mails, for which he apologized when the e-mails became public. 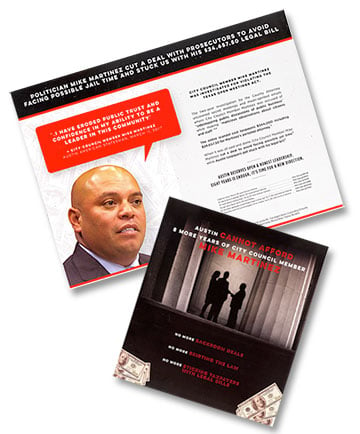 The Austin Bulldog broke the story of the Open Meetings violations on January 25, 2011; filed public information requests for e-mails exchanged by the mayor and council members; and sued when these elected officials refused to turn over e-mails about city business they exchanged on private accounts, resulting in the release of those communications. The Bulldog also broke the story that the City spent $157,636 to defend the elected officials during the 21-month criminal investigation, including $24,657.50 for attorney Joseph Turner, who defended Martinez.

The postcard features a large photo of Martinez being quoted in the Austin American-Statesman of March 11, 2011, based on his letter to the community, in which he apologized for the derogatory statements he had made in the e-mails: “I have eroded public trust and confidence in my ability to be a leader in this community.”

Bo Delp, deputy campaign manager for Martinez, commented on the mailer. He told The Austin Bulldog, “This demonstrates that Steve Adler and his allies are out of ideas for how to address the issues that are most important to middle-class families in Austin and quite frankly this distortion of Mike’s unimpeachable career as a public servant and firefighter is disappointing.”

Referring to the Open Meetings Act violations, Delp said, “My understanding is that Mayor (Lee) Leffingwell was also associated with this particular process, and if Steve Adler thinks it’s such a terrible thing, I assume he will be refusing Leffingwell’s endorsement.”

The Progress for Austin PAC is one of several PACs springing up in the waning days of the runoff campaigns for mayor and seven council Districts.

PACs had made independent expenditures of more than $262,000, as reported by The Austin Bulldog November 3.

As required, the postcard listed the five largest donors to the PAC. They are:

• Marc Winkelman, CEO and co-founder of Calendar Holdings LLC, a philanthropist, and a major supporter of the Texas Book Festival. He was appointed PAC treasurer September 26.

• Dan Graham is the owner of BuildASign.com.

• Adam Loewy, is an attorney with the Loewy Law Firm.

• Thomas “Tom” Meredith, is a former Dell Inc. executive who chairs the board of managers of Meritage Capital LP.

How much these men contributed to the PAC and how much it spent on printing and mailing the postcard has not yet been made public. The PAC’s independent expenditure report for legal services, printing and postage totaled $19,660.06, and was filed with the Austin City Clerk’s office at 3:15pm December 4. Campaign finance reports are due December 8—eight days before the election—for contribution and expenditure activity through the 10th day before the election.

When questioned about the mailer by The Austin Bulldog, Winkelman said this is the first expenditure by the PAC and it was not coordinated with the mayoral campaign of Steve Adler, Martinez’ opponent in the runoff. Winkelman said he was “not sure” how many copies of the postcard were mailed.

In an e-mailed statement to The Austin Bulldog Winkelman said, “We are a group of local community and nonprofit leaders who believe that Austin needs new leadership and a new direction at City Hall. Council Member Mike Martinez has had eight years to prove that he deserves this job and instead he has demonstrated a disturbing lack of judgment, diplomacy and vision. Using his own words and publicly available news stories, we reminded voters about his eight-year record as they make their decision in this critical runoff election.”

Loewy has been actively supporting Adler for mayor and posting endorsements on his website.

Loewy said he got involved in this PAC because, “I have dealt with Mike Martinez for eight years on civil rights issues and found him to be highly dishonest and unethical, and that is why I’m very hopeful there will be a change in leadership.”

When the Steve Adler for Mayor campaign was invited to comment on the postcard, Ron Olivera, communications manager for the campaign, replied, “We’re not responsible for this mailer. This is not an issue our campaign has raised during this race for mayor.”