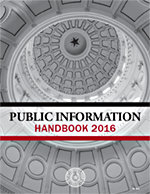 The City of Austin issued a press release this morning to announce a new procedure that would take effect in three business days on March 20. It would allow requests filed under the Texas Public Information Act (TPIA) via email only to be sent to one of two addresses, one for records held by the Austin Police Department ([email protected]) and a second for all other departments ([email protected]).

“Requests sent to any other email at the City of Austin will not constitute an official records request. All City staff have been instructed to respond to requests and direct people to the proper email address,” the press release states.

Austin attorney Bill Aleshire of Aleshire Law PC, on behalf of The Austin Bulldog, immediately fired off a letter to the Austin City Attorney to challenge this procedure.

“I question the legality of this new procedure that may play ‘gotcha’ or delay when common folks make requests to the City for public information,” Aleshire wrote.

“First of all, what authority does the staff have to impose such rules? Under the TPIA, only the City Council can promulgate such rules, and I have been unable to locate any such recent action by Council.”

Aleshire is currently representing The Austin Bulldog in a petition to intervene in opposition to Travis County Attorney’s motion, in his lawsuit against Attorney General Ken Paxton, to close the courtroom to the public and to permanently seal related exhbits, motions and responses in the case. Aleshire previously represented The Austin Bulldog in two successful lawsuits against the City of Austin to obtain public records.

City Attorney Anne Morgan, contacted by The Austin Bulldog for comment, said the City Council did not authorize this procedure.

“This came from the City Manager.”

“I wanted this to be a positive thing,” Morgan said. “I don’t want the rollout to be met with consternation.”

Morgan said she had received Aleshire’s letter and “will talk through what he addresses and see if there is anything we need to fix, or start over.”

She said the new procedure was brought about by a desire to “streamline and be helpful” because “people were sending public information requests to individual employees. We’re trying to make sure they get to the right place.”

A few hours later Morgan emailed Aleshire her response to his letter criticizing the new procedure. Her message (see link below, which includes Aleshire’s response) stated that the new procedure does not change how the City receives public information requests via the website portal, mail, fax or hand delivery. She stated, “The vast majority of requests for public inforkatiom come to the city through its website portal. The link to the portal is on the front page of the city’s website and on the Law Department page”

“The process change the Interim City Manager is implementing concerns only the small percentage of public information requests that come to the city, via email, to individual city employees.

“Going forward, if an individual city employee receives an email requesting pubic information, the city employee will redirect the member of the public to the proper city email address to receive requests.”

Morgan maintains that because the Public Information Act designates the City Manager as the city’s officer for public information, the manager is authorized to designate the email addresses to be used, per Sections 552.201 and 552.301(c).

“LIkewise, based on our experience with the Attorney General’s office, this is the proper manner to proceed if we want to designate a specific email address to receive requests.

Aleshire responded to Morgan in an email stating, “The TPIA rulemaking provision does not say the ‘Officer for Public Information’ can write rules; it reserves that power to the City Council, the ‘governmental body.’ …”

A key point in Aleshire’s objection is that there are deadlines for how long a government agency has to respond to a public information request. Section 552.221 of the Act requires governmental bodies to “promptly” produce information for inspection, duplication or both on application by any person. “Promptly means as soon as possible under the circumstances, that is, within a reasonable time, without delay.”

Section 552.301 states that if a request is received for information the governmental body wishes to withhold, it must seek an attorney general decision within 10 business days of the receipt of the request and state the exceptions to disclosure believed to be applicable.

Ready to challenge if necessary

“Unless the City Council has adopted this new rule change for public information requests, I am prepared to challenge any indication that, if an APD-records request is sent to the Law Department’s Open Records Division, the City will not consider it an official public information request,” Aleshire’s letter states. “In my opinion, such a request will be ‘official,’ and the TPIA deadlines will begin to run on such requests.”

Aleshire further noted that this new procedure has not been published on the websites of the Law Department’s Open Records or the Communications and Public Information Office. This raises the question of how requestors would learn of the procedure.

“Can’t the City staff figure out how to keep a centralized portal for public information requests, and then route the requests (or portions thereof) to the appropriate departments?”

Like Aleshire, Joseph Larsen, special counsel to Sedgwick LLP, is a longtime volunteer attorney for the Freedom of Information Foundation of Texas.

In a telephone interview Larsen said that governmental agencies can and do abuse the Texas Public Information Act. “It’s been abused against me. Public bodies play games.”

But he said that competing interests are involved. The public interest is that someone emails a public information request to the wrong person and thinks it’s okay, then follows up and says, “What happened to my request?” You can’t send an email to the address of someone who may not be there or checking email on a time-senstive basis.

“If a requestor is serous enough about the information and you want them locating the appropriate individual and sending it to them, it’s not such a bad call.”

Of Austin’s new procedure, Larsen said, “It’s better than Houston where they want to make you know who the custodian of records is in every department in the City. It’s more convenient than Houston.”