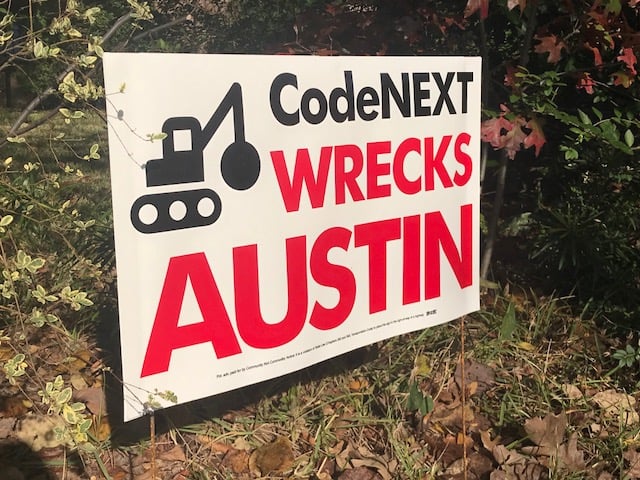 Four weeks after saying petitions would be filed by mid-January, IndyAustin is punting

Corrected January 18, 2018 9:31pm to remove
Robin Rather’s name from list of sponsors per her request

Though still fired up about forcing an election that would give voters a loud voice in whether—or when—a major revision of Austin’s land development law could go into effect, petitioners are backing off the statement made December 21 that petitions would be filed with the City Clerk by mid-January to force a May 5 election.

IndyAustin petition organizer Linda Curtis said in an email today that the decision has been made to instead shoot for a November election.

Curtis provided three reasons for shifting the election to November:

First, the group wants to avoid costing the City an estimated $800,000 to have a May election when nothing else would be on the ballot and the City would have to bear the entire financial burden.

Second, Curtis said, there will be a far larger turnout for a November general election. That’s when U.S. Senator Ted Cruz, all U.S. representatives, Governor Greg Abbott, and many other elected officials will be on the ballot—including Austin Mayor Steve Adler and Council Members Ora Houston, Sabino “Pio” Renteria, Ann Kitchen, Ellen Troxclair, and Kathie Tovo, all of whom are up for reelection.

Third and last, Curtis said, “If we keep the petition in the field as long as possible (mid- to late March) it only helps our chances of passage.”

City Clerk Jannette Goodall told The Austin Bulldog the cost of the election would be closer to $700,000 than the figure cited by Curtis. Goodall said the cost is driven by the fact that Austin covers a large area where more polling places and early voting locations would be needed. While less costly than Curtis estimated, that’s still a big outlay for the City when other large government agencies, such as Travis County and the Austin Independent School District, have no items on the ballot and so will not share the burden.

Through December 31, 2017, IndyAustin SPAC, the specific-purpose political action committee formed to collect funds for the petition effort and the campaign to follow once measures are on the ballot, had collected contributions of $45,000 and spent $39,767, according to a report filed with the City Clerk this morning.

The total amounts given by larger contributors include:

• $5,000 given by Reagan Advertising, on whose behalf IndyAustin is also petitioning for a new sign ordinance (link to petition at bottom of the story).

• $4,632 given by Let Us Vote Austin SPAC, which in an invitation for a private fundraiser being held tonight at Chez Zee restaurant, states, “We are opposing a small group of greedy special interests who have hijacked the CodeNEXT process and want to wreck our neighborhoods.” The named sponsors include George and Donna Shipley, Michael Curry, Mike Hebert, Jeff Heckler, Dawn and Fred Lewis, Robin Rather, and Ed Wendler Jr. (The Let Us Vote SPAC filed its campaign finance report yesterday but it could not be downloaded this evening due to “an unexpected error.”)

• $1,500 was given by James “Jim” Skaggs, who with now Travis County Commissioner Gerald Daugherty, led the opposition to and defeated the light rail election of November 2000 with the memorable slogan, “Costs too much, does too little.”

• $1,000 each was given by transportation activist Roger Baker and attorney Lorri Michel.

The decision to target November for the CodeNEXT election had not been decided when IndyAustin held its petition party January 9, 2018, at the Frisco restaurant in North Austin, an event far better attended than one held at the same location December 21.

At the January 9 meeting, Curtis said the petition drive for CodeNEXT was slowed by the holidays, her personal illness, and the fact that results fell far short of expectations in gathering signatures at the Polar Bear Splash at Barton Springs on New Year’s Day. People were too cold to sign anything at Barton Springs she said, citing temperatures that dipped into the twenties.

Ed English, who has helped to lead the petitioning, said, “This petition drive is going to create a better CodeNEXT because the City Council is aware that 20,000 people will sign the petition to put it on the ballot.”

He added that past petition drives, such as the one that got 10-1 geographic representation on the ballot in November 2012, had been conducted when weather outdoors was more favorable, which has not been the case in recent weeks.

Mark Walters is a former homeowner who now lives in an apartment on Burnet Road. Asked why, as a renter, he is concerned about CodeNEXT, Walters said, “Because this is a community decision about where our city is going to go with future growth. It’s really important for everyone to have a voice—not just City Hall and city staff.”

Steve Speir said, “The momentum is on this group’s side.”

He said, “People are appalled that the City has spent more than $8 million on consultants for CodeNEXT and there’s nothing in the report about flood runoff. That’s a big mistake.”

Speir also complained that the pro-CodeNEXT folks “are painting us as racist. That’s a losing strategy that will come back to haunt them. Everyone I know is mad as hell.”

Donna Barber said, “I feel like CodeNEXT is ‘Californication,’ ” adding, “It will double traffic. It will reduce parking. Cram, cram, cram to accommodate” greater density.

Connie Bodine, who is retired and lives in Allandale, said everyone in her neighborhood is talking about CodeNEXT.

Joan Baker, who said she has lived in Allandale for 58 years, said, “I’m against CodeNEXT. I think it will ruin Austin.”

Her son Frank Baker said, “CodeNEXT will destroy zoning and put houses on top of houses.”

Push for CodeNEXT Election May 5: Petitioners aim to file with City Clerk by mid-January to trigger public vote, December 26, 2017

IndyAustin website (Scroll down to Blog to read statement about election delay).

Who funds this work? This report was made possible by contributions to The Austin Bulldog, which operates as a 501(c)(3) nonprofit for investigative reporting in the public interest. You can help support this independent coverage by making atax-deductible contribution.