Another $68,000 dumped into campaigns in last three days to back favored candidates

Local political action committees (PACs) have already spent more than a quarter-million dollars trying to influence the outcome of the mayor and City Council elections set for Tuesday November 4.

For the pick of the big-money PACs look no further than District 10 candidate Robert Thomas. He has garnered nearly $60,000 in independent expenditures, so far, including a whopping $50,000 from the Austin Board of Realtors—a sum that far exceeds the total amount of independent expenditures made on behalf of any other candidate. The rest of support for Thomas came from the Austin Firefighters Association, Austin Police Association, and some free billboards courtesy of Reagan National Advertising. 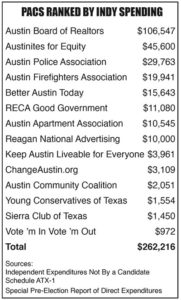 Total independent expenditures jumped almost $68,000 in just the last three days of reporting as PACs chipped in to push last-minute ads, mailers, phone banks and block walkers aimed at getting preferred candidates elected. Of if not elected outright, at least getting them into a runoff where independent expenditures may be even more effective in influencing who serves as the new mayor and fills 10 council seats.

While amounts already spent are significant and might make a difference in the outcome of the general election, these PACs are sitting on more than $800,000 that can be deployed to influence voters in the seven weeks of campaigning to come, after the November 4 general election and before the December 16 runoffs.

Independent expenditures are monies spent for electioneering communication or express advocacy to support or oppose a candidate without consulting with a candidate’s campaign.

Political consultant Peck Young is advising a number of council candidates in this election, some of which have gotten support through independent expenditures.

Who got what amounts, and from where?

Only 27 of the 78 candidates competing for a seat behind the newly expanded dais at City Hall garnered support from independent expenditures. But those who did got a leg up on the competition.

But only Riley has drawn fire through independent expenditures aimed to hurt—rather than help—his candidacy. The Better Austin Today, ChangeAustin.org, and Vote ’m In Vote ’m Out PACs each ran Austin Chronicle anti-Riley ads at a total cost of $3,360. In its ad, BATPAC nominated Riley for the “Guano Award.” ChangeAustin.org’s “Reject Riley” ad gigged him for voting for “every corporate and developer giveaway” and included The Austin Bulldog’s story about him being “nailed for back taxes.” The just-formed Vote ’m In Vote ’m Out PAC’s Chronicle ad pinged him for voting against limiting surge pricing by passenger service Uber.

One interesting side note: The highest profile candidates running for mayor drew only modest independent expenditures. While Steve Adler netted more than $12,000 and Mike Martinez got more than $17,000, the other leading mayoral candidate, Sheryl Cole, got zip—no support at all through indy expenditures from the participating 15 PACs.

Here’s how indy spending went for the rest of the pack, a list of total independent expenditures benefitting each candidate and the PACs that contributed. (For details see the attached spreadsheet, Independent Expenditures for 2014 Austin Mayor and City Council Elections through October 30, 2014.)