Austinites for Geographic Representation Claims 33,000 Signatures, of Which About 22,800 Are Considered Valid

During the June 28 meeting in which the City Council voted to put more City Charter propositions on the ballot for voters to consider in November, Austinites for Geographic Representation (AGR) stacked up seven white boxes next to the podium when AGR volunteer political consultant Peck Young addressed the council.

After holding a press conference at City Hall today, AGR petition coordinator Linda Curtis presented two purple plastic boxes of signed petitions to City Clerk Shirley Gentry. At 3:32pm Gentry date-time-stamped a copy of the cover page of a petition and gave it to Curtis as a receipt.

After submitting the petitions to the City Clerk, Curtis told The Austin Bulldog that the petitions submitted to Gentry contain 22,800 some-odd signatures considered to be valid.

The group needs 20,000 valid signatures to get its proposition on the November ballot. 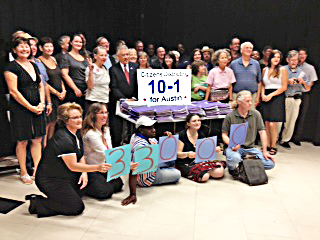 Retired State Senator Gonzalo Barrientos (D-Austin), who chaired the 2012 Charter Revision Committee appointed by the City Council, led off the presentations at the press conference, saying, “Today, as you see, we’re putting all our cards on the table, and 30,000-plus, 33,000, have signed this petition.”

“Never before have so many people urged upon their city government a plan to let the people vote on it themselves,” Barrientos said. City Council, we are challenging you here today, to side with the people of Austin and not with some of those handful of individuals who want things to stay the same, with their inside political influences.”

Attorney Roger Borgelt, of Potts & Reilly LLP principal of his law firm, Borgelt Law, (updated August 7, 2012 2pm) and vice chairman of the Travis County Republican Party, said his group endorsed the plan almost a year ago, as have 28 community organizations. He said the 10-1 plan will bring true geographic representation to Austin. “Accept no substitution. Whether the council will fall on the right side of history is entirely up to them,” he said.

Nelson Linder, president of the Austin NAACP and a member of the 2012 Charter Revision Committee, said, “We support the 10-1 plan… For too long, a certain small group of white folks here have set our agenda, and it’s time out for that. This is a new day and a new era.” He said the 8-2-1 plan that the City Council voted on first reading to put on the November ballot was designed ” to confuse people and halt our efforts.”

Attorney Fred Lewis noted that the 2012 Charter Revision Committee, of which he was a member, overwhelmingly supported the call for an Independent Citizens Redistricting Commission, which is part of the AGR petition. “The district lines are going to have to be drawn by independent citizens and not by the council. The council wants to draw their own lines. And the people of Austin know we don’t want the Texas Legislature to draw our state representative lines, state senate lines, congressional lines, and we don’t want the Austin City Council to draw our geographic districts.”

Stewart Snider, president of the League of Woman Voters Austin Area, said, “Austin is the largest city without its own congressman. Austin knows all too well what happens when sitting politicians draw their own electoral boundaries. So we strongly endorse the Citizens Redistricting Commission as part of the AGR plan.” Noting their are people on the current City Council who have expressed a preference for retaining control of drawing district boundaries, he said, “We’ve got to stop that before it happens.”

Amelia Lopez-Phelps is a board member of the Greater Austin Hispanic Chamber of Commerce, which she said represents more than a thousand business members. She said the group supports the 10-1 plan and wants the City Council to have only one geographic representation plan on the ballot. “Adding more than one would clearly, in anyone’s eyes, dilute the vote,” she said, “and would most likely cause voters not to support a single-member option.”

Former County Judge Bill Aleshire, a lawyer with Riggs Aleshire & Ray PC, made a much longer speech. He said, “I support the 10-1 people’s plan because only that plan makes it feasible for candidates to run in neighborhood districts without being dependent on the same special-interest campaign contributors who have dominated City Hall far too long. I also support the 10-1 plan because I believe, freeing City Council members from the clutches of special interests is the only way to bring spending and taxes under control.

“It’s no surprise that the Real Estate Council of Austin (RECA) has come out against the people’s 10-1 plan in favor of the insider’s 8-2-1 plan. (To see RECA’s resolution, click here.) They are insiders. Such special-interest groups bundle campaign money to elect people who will then help them get what they want from government at great cost to the average taxpaying family. These special-interests drive up the costs of government, because you never see them asking the City to control costs or be fair to average taxpayers. No, they are the reason the gravy keeps getting piled up higher and higher.

“10-1 is the proposal that has broad-based, diverse, grassroots support, something the 8-2-1 proposal failed to achieve. Where is the 8-2-1 petition? Why didn’t the 8-2-1 proponents even try to petition to get that on the ballot? Why are they supporting the same 8-2-1 plan that voters rejected in 2002? The answer is clear: The supporters of the 8-2-1 plan are the insiders who think they can control the votes on the City Council to put up a plan that may split votes, between two plans, of those who support districts, and result in defeat of single-member districts altogether. Putting the 8-2-1 plan on the ballot is the strategy to retain the insider’s game and risk losing single-member districts altogether. If Austin voters want to take back City Hall, I encourage them to support the 10-1 plan.”

(Disclosure: Bill Aleshire is the attorney who represents The Austin Bulldog in two lawsuits against the City of Austin.)

AGR collected $20,818 and spent $19,621 on the petition drive through June 30, according to the specific-purpose committee report submitted to the Austin City Clerk July 17. The total included numerous in-kind contributions.

At the celebration at Opal Devine’s later today, Linda Curtis said that the group had also borrowed $3,500 to make the final push for the petition drive and needed donations to pay it back. Suits said that amount was borrowed after the June 30 reporting period ended.

Citizens Group to Make Final Petition Push Austinites for Geographic Representation Claims to Have 17,000 Signatures, and Shoots for 13,000 More, June 4, 2012