Postcard Wars Down to the Wire

In the waning days of the mayoral runoff campaigns to decide who will lead the first 10-1 Austin City Council with nine brand-new members, the main benefactor may be the printers and the U.S. Postal Service.

Supporters and detractors of Steve Adler and Mike Martinez are nevertheless doing what they can to sway potential voters before the December 16 election.

After five-plus weeks of relentless campaigning since the November 4 general election, it’s doubtful these last-minute attempts will make a huge difference in the outcome. But that’s not stopping people from making independent expenditures that are separate from the candidates’ own campaigns.

A four-color, six-by-11-inch postcard with a photo of Barton Springs landed in mailboxes yesterday, headlined, “Should the future of the springs be in Steve Adler’s hands?” (See link to two-page mailer at bottom of this story.) 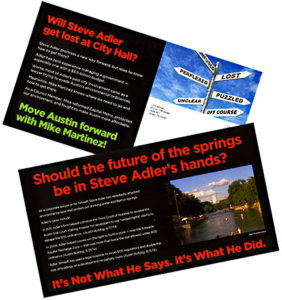 The mailer points to three articles published by The Austin Bulldog, two of which detailed Adler’s work as an attorney representing developers that sought to evade compliance with then-current environmental regulations. The third article exposed how Adler profited from the sale of Oak Hill property that did not have to comply with the Save Our Springs Ordinance. (Links to all three stories are provided at the bottom of this article.)

The postcard includes a statement that it was paid for by Austin-based attorney Lorri Michel of the Michel Law Firm PC, who specializes in property taxes.

Meanwhile the Progress for Austin PAC is countering with a two-pronged postcard of its own.

One side touts Adler’s clean-air efforts when he was chief of staff for then-State Senator Eliot Shapleigh in preventing the reopening of the ASARCO smelter in El Paso. (Link to two-page mailer at bottom of this story.)

Adler’s “Holiday Wish List: Cleaner air for the next generation.”

The other side attacks Martinez for his vote of August 29, 2013, to allow treated wastewater to be sprayed over the Barton Springs Recharge Zone, as reported by The Austin Chronicle September 13, 2013.

Progress for Austin paid almost $20,000 for a previous postcard attacking Martinez, as reported by The Austin Bulldog December 4.

Neither Michel nor Progress for Austin have yet reported the cost of these new mail pieces, according to the City Clerk’s webpage that includes reports of independent expenditures.

Poop water in the pool, really?

The postcard attacking Martinez states, “His lone vote could have stopped this project, but once again he showed that his judgment stinks.”

At issue in that vote was whether to approve a settlement in a contested case that would then go before the State Office of Administrative Hearings (SOAH). The hearing would involve the application of Jeremiah Venture LP for a draft permit issued by the Texas Commission on Environmental Quality, according to the Request for Council Action for Item 33 on the August 29, 2013, agenda.

If permitted, the developer would be authorized “land application of treated wastewater in Hays County,” the “poop water” in question.

The minutes from that council meeting state that Council Members Kathie Tovo and Laura Morrison made and seconded a motion, respectively, to deny the settlement.

Martinez made a substitute motion seconded by Bill Spelman, to accept the settlement.

The substitute motion passed on a 4-3 vote with Mayor Lee Leffingwell, Mayor Pro Tem Sheryl Cole, Martinez and Spelman voting in favor, with Morrison, Tovo and Chris Riley voting no.

Bill Bunch, executive director of the Save Our Springs Alliance, told The Austin Bulldog today that the result was to leave SOS as the lone opponent of the permit, which the city had also previously opposed.

When the case went to SOAH, Bunch said, there were challenges to SOS’s standing and attempts to disqualify the Alliance’s evidence, neither of which succeeded.

With the risk that the hearing examiner might recommend denial of the permit, the developer “negotiated with the city to sell out and the city paid an arm and a leg for the property,” Bunch said. “The city would have had a lot more bargaining leverage if they had stayed in the fight with us.”

Ultimately, then, no “poop water” got into the aquifer.

Although the postcard attacking Martinez quotes Bunch stating , “You can’t spread poop water on the recharge zone and expect that it will not recharge,” Bunch said he was not involved in or consulted about the postcard.

Zimmerman v. Flannigan in another postcard

Texas Values Action, a nonprofit group dedicated to preserving and advancing a culture of family values in the State of Texas, according to its website, sent the mailer, the Statesman reported.

The mailer “describes Zimmerman as pro-life and against gay marriage, and noted he opposed extending spouse benefits to the same-sex partners of government workers,” the Statesman reported, while noting that Flannigan founded the Austin Gay and Lesbian Chamber of Commerce, does not want to ban abortions, and advocates same-sex couples should get the same benefits as heterosexual partners.

The same-sex partners benefits have a controversial history in Austin politics. Originally the benefits were granted by the City Council, creating a backlash from conservatives who conducted a petition drive that got Proposition 22 on the May 7, 1994 ballot. Voters approved Prop 22 by 62-38 percent to roll back the benefits, which later were reinstated.

Texas Values Action has not filed a treasurer’s appointment or reported independent expenditures with the City of Austin.

Firefighters Back Martinez With $170,000: He sure needs it with opponent setting fundraising records; PACs independent spending not more than $610,000, December 10, 2014

Steve Adler Land Developer: The mayoral candidate profited from not having to comply with the SOS Ordinance, August 5, 2014

Steve Adler’s Other Environmental Lawsuits: Three more cases in which the candidate’s legal work pitted him against environmental regulations, June 17, 2014

Steve Adler’s Baggage: Environmental Lawsuits: Mayoral candidate a lawyer whose work puts him at odds with environmental organizations, May 21, 2014

Postcard: Should the future of the springs be in Steve Adler’s hands?