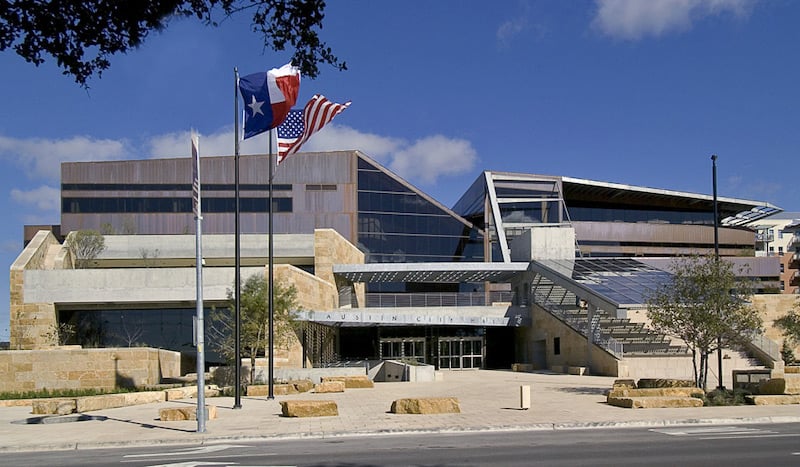 During the 2019-2020 Democratic presidential primary, a handful of candidates backed the idea of paying reparations to the African-American descendants of slaves. Joe Biden was lukewarm on the idea, though he agreed that Americans “we must acknowledge that there can be no realization of the American dream without grappling with the original sin of slavery, and the centuries-long campaign of violence, fear, and trauma wrought upon Black people in this country.”

With Biden now in the White House, and Congress contending with other legislative priorities, reparations is likely off the table for now in Washington.

But in Austin, Texas, the dream is alive and well.

The city council March 4th approved a resolution that advocates see as a step toward their goal of securing city funding for what they call restitution payments. Such payments are akin to financial reparations for slavery—and might be implemented in similar or identical ways—but they aim to redress 20th century wrongs, rather than 19th century slavery.

The resolution grows out of a reparations movement that increasingly has turned its attention to state and local governments, amid frustration over the inertia in Washington. In California, for example, the state assembly passed a law last year establishing a task force to study and develop reparations proposals. In Illinois, the city of Evanston this year is scheduled to begin paying up to $25,000 each to eligible residents in the form of a housing benefit.

Austin’s resolution refers to a desire to “create a sustainable economic model for the benefit of Black Austinites.” Natasha Harper-Madison, the city’s only Black council member, sponsored the item, which passed on the consent agenda, meaning that there was no debate. The co-sponsors were Mayor Steve Adler and Council Members Greg Casar, Vanessa Fuentes, and Kathie Tovo.

While the resolution itself doesn’t expressly mention reparations or restitution, it requires the city manager to conduct a study “outlining the economic value of the direct, indirect, intentional, and unintentional harm caused through economic, health, environmental, criminal injustice, and other racial disparities and declination of resources by the City.”

In other words, the study would attempt to quantify the economic harm caused by various injustices perpetrated across the decades. That would necessarily involve making judgment calls about which past policies were discriminatory and harmful to Austin’s Black community.

Redlining is an illegal practice of denying credit to residents and businesses for reasons other than poor credit risk. Redlining didn’t just happen elsewhere. In fact, Bulldog editor Ken Martin, in February 1990 while an investigative reporter for the Austin Business Journal, broke the story that the four major banks in Austin were to be investigated by federal bank examiners for alleged redlining. Authorities at the time said it was unlikely that the public would ever know the outcome of the investigation, which lasted more than a month.

The City’s proposed study poses challenges to those who would undertake it. While it might be fairly straightforward to estimate the value of properties affected by forced relocations, for example, how does one quantify the “direct, indirect, intentional, and unintentional harm” caused by Jim Crow laws? According to the resolution, scholars at two institutions of higher education would be tasked with solving that riddle: the LBJ School of Public Affairs at the University of Texas at Austin, and Huston-Tillotson University, the city’s only historically Black university.

The impetus for the council resolution came out of a dialogue among Adler, Harper-Madison, and a collective of activists known as the Black Austin Coalition, who held a rally on the matter November 14, 2020.

Speaking at that event, the Coalition’s point person, rapper Nook Turner, demanded that the city pay Black Austinites a minimum $500 million over the next decade. But that would just be the start. The city manager’s study, which the council approved Thursday, would form the basis for further payouts. “Our initial ten-year ask is $500 million. And then once the city manager lets us know how much they actually owe us then we can sit down in the next ten-year period and figure out how they gonna give us the rest of the money,” Turner said.

“They need to give us what they owe us,” he said. Throughout Turner’s speech, another attendee at the rally periodically interjected, shouting, “Where’s our money?”

Turner outlined a plan for a Black Restitution Fund and Black Embassy that would disburse the funds. He said that he had sent a draft of the plan to Adler and scheduled a meeting with him and Harper-Madison. The March 4th resolution evidently represents the culmination of that dialogue.

Another activist group, the Austin Justice Coalition, issued a “call to action” the day before the council meeting, calling on supporters to dial in to show their support.

Several key concepts proposed by the Black Austin Coalition were formalized in the council resolution, including the idea of a Black Embassy. The resolution states, “The City desires to create a centralized Black resource and cultural center—a Black Embassy—that is geared to the success and cultural promotion of the demographics in need by providing relevant resources, and support for existing and future black-led businesses and organizations, in a central location in East Austin.”

“The City Manager is directed to return to Council with a planning scope, process and funding recommendation for how to accomplish this.”

After the vote, Black Austin Coalition praised the mayor on Facebook, thanking him for “being a man of your word.” In June, Adler had signed a statement committing to work with the Coalition. Adler said, “I believe there are no civil rights without economic justice and I am committed to exhausting myself doing everything within my power to put money and resources behind achieving that economic justice for the African Americans in our community.”

‘Invest in the community’

While the council resolution marked a significant victory for the Black Austin Coalition, the measure was broad enough—and vague enough—that supporters could read into it what they liked. Some viewed it as a step toward actual cash payouts to individuals. Others expected only that it would result in greater community investments to address racial disparities in the economy.

For example, during the public comment period of the council meeting, resident Michael Lofton voiced support for the measure, saying, “I would like to see programs put back into the schools to give kids in high school a skill, such as plumbing and electrical, auto mechanics and construction.”

But other speakers favored a more traditional concept of reparations. Mimi Styles said, “It doesn’t take a research study to know that Black people deserve a check, and equitable retribution for the centuries-long tragedy placed upon our lives.”

“Take a look at what Evanston, Illinois just did. They’re the first city to really pay their citizens over $25,000 apiece, with a $10 million package. I just urge you to get in line with cities like that one who are finally taking the necessary steps to pay back the people they’ve wronged.”

Tiffany Washington, who identified herself as “the only Black farmer in Austin,” said, “I’m against item number 67 because it does not have a budget to pay us right now.”

“We have cultural centers, we have the Six Square, we have the Carver Museum, we have the African American Heritage Resource Center. There are so many resources here  already. We need to be paid. And I’m asking that the City of Austin pays us.”

Mika Arnold, a self-identified local activist, said, “The council should invest into the Black people…If y’all are for us, the Black people, show us. It’s simple. Show us.”

Kyle Harmon said, “Simply accepting responsibility is hollow if not paired with reparations, abolition, and cultural investment. There is no solution but earnestly heeding the demands of Black, Indigenous, Queer and Disabled folks. Anything less is an intentional continuance of violence.”

These clashing perspectives reflect a broader disconnect in the national debate on reparations.

During the primary campaign, then-Senator Kamala Harris (D-California) pointed out in a radio interview that reparations “means different things to different people.”

“You need to put resources and direct resources—extra resources—into those communities that have experienced that trauma,” she said.

Likewise, Senator Amy Klobuchar (D-Minnesota) said that reparations “doesn’t have to be a direct pay for each person, but what we can do is invest in those communities. Acknowledge what’s happened.”

Senator Bernie Sanders (D-Vermont), the runner-up in the presidential primary, repeatedly shied away from the idea of “just writing out a check.” Nonetheless, several Democratic candidates came out in favor of a more traditional notion of reparations, and the 2020 Democratic platform espoused a consensus view to establish a national commission to “study reparations.”

The Congress made a largely symbolic gesture in that direction when a House subcommittee held a hearing February 17th on HR 40, a bill to create a commission to “study and develop reparation proposals for African-Americans.” But the resolution hasn’t advanced out of the House Judiciary committee, let alone made it to a floor vote in either chamber.

When he spoke at the February hearing, Judiciary Committee Chairman Jerrold Nadler (D-New York) downplayed the possibility of individual financial payments. “It is important to recognize that H.R. 40 makes no conclusion about how to properly atone for, and make recompense for, the legacy of slavery and its lingering consequences,” he said.

“It does not mandate financial payments of any kind and it does not prejudge the outcome of the commission’s work. Instead, it sets forth a process by which a diverse group of experts and stakeholders can study the complex issues involved and make recommendations.”

“In fact, most serious reparations models that have been proposed to date have focused on reparative community-based programs of employment, health care, housing, and educational initiatives—righting wrongs that cannot be fixed with checks alone.”

By that definition, the reparations agenda could be subsumed under the broader Democratic policy agenda. Adler nodded in that same direction when he spoke March 4th in support of Agenda Item 67, saying that righting past injustices would “require commitment from each of us to address our affordability and displacement crises, to expand healthcare options, (and) transportation infrastructure…It’s going to require us to make investments.”

“We’re not alone in this work. Cities around the country—Asheville, Providence, Durham, Tulsa, and others—are owning up to the physical, emotional, and economic violence visited upon people of color.” Notably, Adler omitted mention of Evanston, Illinois, the first city to actual pay out reparations to individuals. That’s perhaps because Adler favors the approach of communal investments outlined above—what Nadler called “reparative community-based programs.”

To be sure, the mayor didn’t rule out individual payouts, but he did imply that if that’s going to happen then the federal government should handle it. “I am proud our city is adding its voice to those cities across the country calling on Congress to develop and execute a national program of restitution for descendants of slaves in this country,” the mayor said.

The city’s resolution calls on the federal government “to initiate policymaking and provide funding for reconciliation and racial healing at the local, state and national levels.”

Either way, the significance of the resolution is that it will require a study resulting in a dollar figure, however approximate, of the “economic value of…harm caused through…racial disparities” in Austin. At that point, reparations advocates will be expecting a payout, whether in the form of individual reparations or community programs.

In a Facebook post after the vote, the Black Austin Coalition wrote, “This is just the first step—a price tag will be added to what the City owes us!”