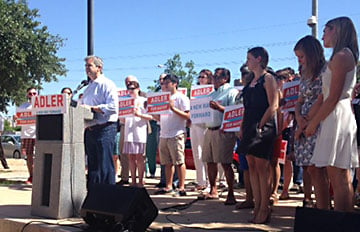 The shaded concrete bleachers at the City Hall plaza were filled with supporters of 58-year-old attorney Stephen Ira “Steve” Adler, who’s not well known outside the numerous nonprofit organizations that he’s assisted and led. The open-air plaza was likewise populated by fans standing in the 92-degree hot sun and enjoying treats from Amy’s Ice Cream.

Adler, who’s widely known for being soft-spoken, was nevertheless forceful in delivering a 22-minute speech that touched on most every major area of concern and sometimes varied from Steve Adler’s Scripted Campaign Kickoff Speech that was shared with the press during the event. (For a more accurate account of his speech, listen to the recording linked near the bottom of this article.)

Adler did not address his main political opponents by name, those being declared candidate Mike Martinez and possible candidate Sheryl Cole, both of whom have served on the Austin City Council since 2006.

But he took a backhanded swipe at both, near the end of his speech, when he said, “Others have had the chance over the last eight years (the length of time that Martinez and Cole have been in office) to address the very same challenges we face today. It is time for new leadership.

“We don’t want experience in how things have been done in the past; we need a new and broader experience and a vision for how things should be done tomorrow.”

In telling his life story Adler noted that his father died when he was 21 and his mother followed six years later. He attended both Princeton University and the University of Texas Law School on scholarships, he said, and chose the latter “because it was the cheapest law school in the country.”

He expressed gratitude for the iconic Barton Springs Pool by saying he had dipped into its cool, clear water within 45 minutes of arriving in Austin (that being the summer of 1978).

Adler noted his years of service for then State Senator Eliot Shapleigh (D-El Paso), his work as a civil rights lawyer after graduation from law school, and his leadership in numerous nonprofit organizations (all of which were detailed in Part 2 of this series).

“Throughout my career, I have defended renters and landowners when the government or big corporations were unfairly taking their property,” Adler said. “I’ve defended small and large business of all kinds across the state, over a dozen churches, and the Texas Nature Conservancy—and I’ve seen that the government doesn’t always work for everyone. That’s why I’ll work hard every day to ensure that our city government works for all of us in Austin.”

“Mayor (Lee) Leffingwell promised to jumpstart the economy and create jobs,” Adler said. “He did. And we owe him a debt of gratitude. But now we must deal with the challenges that growth brings.”

Among the challenges he named were traffic congestion, increased poverty, and floods. Also education, affordability, and protecting the environment and neighborhoods.

“To meet our challenges we need a new way forward,” Adler said. “That’s why I’m running for mayor.”

“It’s appropriate that today we meet in front of City Hall,” Adler said. “Soon, the whole city takes over this building. Today marks the beginning of the citizens’ council. We will have new communities and new leaders sitting at the council table in that building for the first time.

“Together we’ll chart a new way forward,” Adler said. “We will focus on common goals rather than what divides us.”

Adler was introduced with brief speeches from each of his three daughters, Sarah, Susan, and Karen; by nonprofit executive directors Cookie Ruiz of Ballet Austin and Julia Cuba of GENaustin (Girls Empowerment Network), and by the former Senator Shapleigh.

He closed his speech by introducing and embracing his wife, Diane Land, founder, president and CEO of DT Land Group Inc.

Among the notable people in the audience to support Adler, interviewed before the speech, were Kerry Tate, founder of the Tate Austin public relations firm and now a partner at Moore-Tate Projects + Design LLC and a founding partner at Civic Interest LLC.

Tate said she had collaborated with Adler when he worked on education issues during legislative sessions and said of Adler, “He’s smart as a whip.”

Tate said she had been trying to recruit good candidates to run for mayor when in January she heard from Eugene Sepulveda, Adler’s campaign treasurer, that Adler was going to run.

She said she thinks Adler’s experience as an attorney will be valuable in the mayor’s role “because he understands land use and will have the city as a client.”

“I’m ready for a change, to give a guy a shot who’s been a business guy,” Daugherty. “One of the problems we’ve got is we can’t get business-minded people involved. Some of my party are against government in general,” he said. “… most people want to see some changes.”

Adler’s praise for the “citizens’ council” that will be implemented by the mayor and council members elected under the new 10-1 system is remarkable but in fact constitutes a profound shift in his political focus: from the state to the local.

After all, he cut his political teeth working as Senator Shapleigh’s chief of staff and general counsel in the legislative sessions of 1997-2005.

To be sure he has been deeply involved in important local issues through the various nonprofit organizations detailed in Part 2 of this series.

And, in Part 1, Adler praised the 10-1 system and said he voted its passage.

But examination of the contribution and expenditure reports filed by Austinites for Geographic Representation—the grassroots coalition that petitioned to get the measure on the ballot in November 2012—indicate that Adler did not contribute any money to assist the campaign in winning voter approval.

Adler and Land contributed nothing to the mayoral elections of 2009 and 2012, not to Lee Leffingwell or Brewster McCracken in 2009, and not to Leffingwell or Brigid Shea in 2012, according to a review of the contribution and expenditure reports filed by those mayoral candidates.

Adler’s relative disinterest in Austin politics is all the more remarkable, given his generous support for statewide issues.

Over a four-year period, while Adler served on the organization’s board of directors, he and Land contributed $75,050 to the nonprofit Texas Tribune, which covers state politics, state government, and state policy.