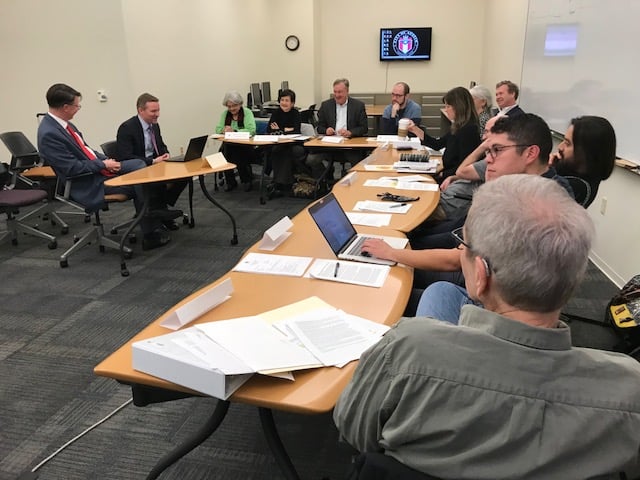 The 2018 Charter Review Commission on Monday evening heard a briefing on a preliminary report prepared by its Campaign Finance and Ethics Work Group. The proposal would utilize property taxes from the City’s general fund to partially finance the election campaigns of mayor and council candidates.

To benefit candidates would have to accept lower contribution limits as well as limits on self-funding and total expenditures. The proposed system would replace the current policy of disbursing funds to candidates who sign the campaign pledge and make it into a runoff.

The proposal also includes establishing a nonpartisan Ethics Commission with enforcement powers to include the ability to issue subpoenas, audit candidate records, and fine offenders. It would be independent of the Council and City Manager, report to a citizen board, and be equipped with expert staff and adequate resources.

The plan unanimously approved by the four-member group requires the Commission’s approval and public hearings before it could be recommended to the City Council for placement on the November ballot.

If placed on the November 2018 ballot and approved by voters the new system would take effect in the 2020 City Council elections.

The underlying motivation for advocating public financing is to further the goal of promoting democracy that started with 2012 voter approval of a City Charter change to cease electing all council members at-large and establish 10 geographic council districts. District elections were held in 2014 and the newly elected council members took office in January 2015.

As shown in The Austin Bulldog’s mapping of where council members lived when they were elected in 1971 through 2014, under the old at-large system of electing council members the majority of seats were won by candidates who lived in just a few affluent West Austin zip codes. Other parts of the city often had no one on the council who lived in their vicinity.

Although the 10 council seats are now distributed throughout the city, the bulk of campaign contributions that funded the 2016 council elections came from residents in the same few high-wealth zip codes in West Austin, which accounted for 44 percent of all contributions in that election, according to an analysis offered by Commission Member Fred Lewis (linked at the bottom of this story).

Lewis pointed out that while public financing assistance would enable more candidates to run it would only partly counter the advantage enjoyed by wealthy candidates who can self-fund much of their campaign expenses, a right guaranteed by the U.S. Supreme Court.

“We came here with general concepts and want direction” on such things as who would get vouchers (registered voters, all residents) and limits on contributions and expenditures, Lewis said.

The draft plan is very much a work in progress and will be considered again at a meeting Thursday, January 11, starting at 6:30pm in Room 1029 at City Hall.

Two out-of-town experts were on hand January 8, 2018, to brief the Commissioners: Paul Seamus Ryan, the Common Cause national vice president for policy and litigation, who helped draft the Seattle measure; and Wayne Barnett, executive director of the Seattle Ethics and Election Commission, who implemented it.

“Wealthy people are well represented and always have been,” said Ryan (no relation to House Speaker Paul Ryan). “Public financing creates incentives for people to participate,” including volunteering for campaigns and holding winners accountable after the election.

No restrictions were placed on which Seattle candidates could receive vouchers. Lewis said that the recommended Austin program would allow council candidates to accept vouchers only from residents of their district.

The draft proposal is based on a system first utilized by the City of Seattle in its 2017 elections. In 2015, 63 percent of voters approved an Honest Elections Seattle ballot initiative, claimed to be the first Democracy Voucher Program in the nation.

The post-election analysis (linked at bottom of story) states that the voucher program reduced the power of big money and greatly expanded political participation.

To implement the plan, on the first business day of January 2017, Seattle’s registered voters—all 502,000 of them—were mailed four $25 Democracy Vouchers that could be used to support candidates for three positions on the ballot: the city attorney and two candidates for at-large City Council Positions 8 and 9. Vouchers were mailed with postage-paid return envelopes.

People not registered to vote also were given vouchers if they applied and were verified as city residents.

The six candidates who qualified for Democracy Vouchers received a grand total of $1,140,525 in the 2017 election cycle that ended with voting in November. That worked out to about $6 in property taxes for each Seattle household, Barnett said. The entire program is allocated $3 million a year for 10 years.

Total campaign funding for individual candidates—collected through both vouchers and contributions—ranged from as little as $27,550, for the candidate who gathered 1,102 vouchers, to the $300,000 limit for the two candidates who each got 12,000 vouchers, according to program data.

More than 200,000 votes were cast in each of the these races, according to the King County election results page for the November 7, 2017, election. Although the mayor’s job was also on that ballot, it was withheld from the Democracy Voucher program because for the initial kickoff effort the scope was purposely reduced.

Vouchers were bar-coded and had to be signed by the voters. Vouchers could then be either given directly to the candidates of choice or marked to designate the desired candidates and mailed to the Ethics and Election Commission that administers the program. Eight of 10 vouchers were mailed in rather than given to candidates directly, Barnett said.

Qualifications and restrictions in Seattle

To qualify to receive vouchers, at-large council candidates had to first gather 400 contributions of at least $10 each to demonstrate an ability to organize a campaign, accept contributions of no more than $250, and participate in three debates.

Nonparticipating candidates could accept individual contributions of no more than $500.

Of the 17 Seattle candidates who applied in 2017 for the primary election, six met qualification requirements to redeem vouchers. Officials said this showed the system achieved the goals of weeding out candidates who were not viable and warding off public criticism for spending tax funds on unprepared candidates.

“Newspapers will write about kooky candidates who get public money,” Ryan said. “There has to be a threshold.”

Five of the six candidates who survived the primary and advanced to the general election ran using vouchers. All three winners did so.

One of the voucher candidates was opposed by a nonparticipating candidate who was heavily supported by independent expenditures. By demonstrating the opponent was materially exceeding campaign spending limits, the voucher candidate sought and was granted permission to exceed the $300,000 total and spend with no limit, Barnett said in a later interview.

More than that, the system accomplished its goal of achieving wide participation in a city where only 2 percent of residents previously made political contributions. And it resulted in six times as many people participating in the election.

At least 25,000 Seattle residents participated as campaign donors in the 2017 election cycle, three times the number who donated to candidates in 2013, the report states.

The 11-member Charter Review Commission was established last June via Resolution No. 20170622-040 and held its first meeting November 6, 2017. It is charged with recommending amendments for consideration by the Council in time for proposed amendments to be placed on the November 2018 ballot.

The Commission was specifically charged with considering campaign finance, including contribution and expenditure limits; City boards and commissions, including terms of Planning Commission members; requirements for citizen-initiated petitions; appointment of the City Attorney by the City Council; and correction and clarification of verbiage recommended by the City Clerk and City Attorney.

The Commission was ordered to conduct public hearings and encourage broad citizen input before submitting recommendations to the Council.

The scope of work may be expanded by the Council and the Commission could request such expansion.

An alphabetic list of donors who have contributed to The Austin Bulldog since the organization was formed in 2009 and the cumulative amount each person had given through October 30, 2017, are listed on the Contribute page.

Comments are welcome: If you would like to post your reaction to this story, please do so in the space provided below. 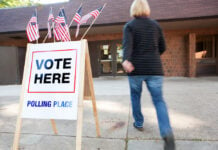 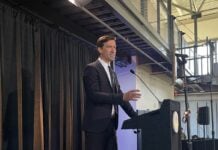 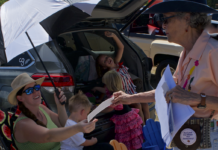