Customer feedback deadline 10am next Monday

This story was significantly revised and updated at 9:42pm Wednesday December 11, 2019.

Although accepting value protests through TCAD’s online portal was first offered in 2018, that was not made the only option for filing an informal protest until 2019.

As The Austin Bulldog reported December 1, 2019, cutting off that popular means of resolving property value disputes more than tripled the number of formal hearings before the Appraisal Review Board (ARB). ARB costs shot up more than 600 percent. Complaints more than doubled. Records are being set in the numbers of arbitrations requested and lawsuits filed to contest ARB valuation decisions.

Finally, after The Austin Bulldog hammered the agency for serious problems in a dozen reports (linked at the bottom of this story), the chief appraiser will rescind her counterproductive policy of prohibiting property owners meetings with staff appraisers. 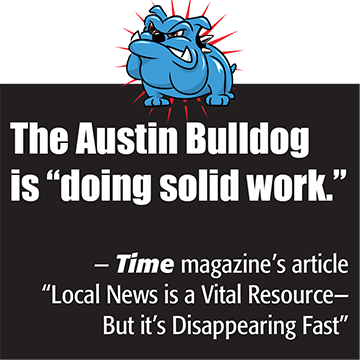 Crigler’s announcement that she will recommend resumption of in-person informal protest meetings is tucked inside the website on a page that invites participation in a survey.

To find the survey page one must first notice, at the top of the agency’s home page, the headline, “We Want Your Feedback for the 2020 Protest Season.” Clicking the link “to complete our survey” opens a page headlined “Travis County Property Owner Survey.”

Crigler’s statement is positioned immediately below that headline.

The website states, “TCAD is soliciting feedback on this recommendation to present to the Board of Directors at a December 2019 work session. Your participation is appreciated. The survey will close at 10am Monday December 16, 2019.”

Contacted by telephone December 10, Communication Officer Cynthia Martinez was tight-lipped about how TCAD promoted awareness of its survey.

My assessment indicates TCAD has done nothing to promote the survey through marketing, advertising, or communicating directly with the 400,000 property owners who are directly and financially affected by TCAD policies.

TCAD literally buried a press release about the survey on its website. To find it you must click on “Resources” in the navigation bar, then select “News.” That opens a page titled “News and Updates.” A bold “Press Releases” headline lists three releases, one of which is titled, “Travis Central Appraisal District Seeking Public Feedback for the 2020 Protest Season—December 6, 2019.”

Martinez declined to provide a list of media organizations that were sent the press release. The Austin Bulldog did not receive it. A Google search for media mentions of the survey turned up nothing. The Austin Bulldog filed a public information request for a copy of that list.

You can help support and expand Bulldog coverage by making a tax-deductible donation. Whatever you give now will be tripled thanks to matching donors during our NewsMatch  campaign.

TCAD’s social media reaches no one

At the November 13, 2019, TCAD board meeting, Martinez reported she had established social media accounts to give the agency a presence on Facebook, Twitter, Instagram, and LinkedIn. Her plan identified key audiences and key performance indicators. The plan included goals for each account, such as “Create a positive reputation for TCAD,” “Educate on who we are and what we do,” and “Educate on issues important to property owners.”

The “Key takeaways and next steps” on the last page of the plan states, “TCAD’s current social media engagement rate is extremely low. It will take a few months to make our channels active and engaging. TCAD should adopt a monthly maintenance budget, separate from any campaign budgets (recommended $50/month) to help with this.”

While it’s unclear what’s meant by “campaign budgets” the idea TCAD could significantly increase its social media reach on $50 a month is simply unrealistic.

The social media accounts were established in October, Martinez told the board. TCAD has hardly used them. None have drawn much interest.

Given TCAD’s reluctance to provide information about how the survey was made widely known, The Austin Bulldog examined the social media accounts looking for clues.

Facebook— TCAD’s Facebook page this morning had 286 “likes” and 318 followers. It includes two December 6 posts with links to the survey.

LinkedIn—TCAD posted a survey notice to LinkedIn December 9, where the agency has eight followers.

Instagram—The agency’s Instagram page has 17 followers and four posts, none mentioning the survey.

In the aggregate these four social media platforms reach a total of 358 followers.

Martinez declined to answer questions about what else may have been done to bring the survey to the attention of property owners.

She said after the survey closes December 16 the results will be compiled for a December 18 report and presented to the TCAD board.

He said he wanted to make sure those clients are made aware of the opportunity to provide feedback on the TCAD survey. Bawcom provided a copy of the emails Texas Protax is sending to every one of them with this message: “We need your help! Please go to the link below and complete the survey from TCAD.”

“The deadline to complete the survey is Monday, December 16, 2019, so please do not hesitate to take a few minutes to help bring informal hearings back to Travis County’s process.”

“Please know, historically, the agents of Texas Protax, as your representatives, believe that value conclusions and property reviews are more consistent, fair, and thorough when made with face-to-face informal discussions with appraisers and not in front of the appraisal review board,” the email states.

“We have found that during an informal, face-to-face discussion with an appraiser gives both a property owner and a property owner represented by an agent, the opportunity to correct errors and better understand the process, whereas a formal-only hearing does not address property error corrections that help ensure more accurate data and appraisals in the future. We would ask that you keep this in mind when answering this survey.”

Debra Bawcom, CEO of Texas Protax, said her company is promoting the survey to colleagues across the state through similar emails sent to some 400 members of the Texas Association of Property Tax Professionals.

That’s important because out-of-town companies represent thousands of Travis County property owners before TCAD and the Appraisal Review Board.

Via text message sent from Nicaragua this morning, John Paul “JP” Krueger, founding partner and CEO of Five Stone Tax Advisors, said he didn’t notify his 19,500 clients about the survey.

“I did not promote the survey for a few reasons: the TCAD site said Crigler already recommended informals to the board. Additionally, based on the non-anonymity, the discriminatory potential of the questions, and my lack of trust in with the TCAD leadership, I remain highly skeptical of the true purpose of the survey.

“Also, with such short notice and no real way for the public at-large to gain awareness of the survey, the results would be statistically insignificant for any true benefit.”

Actually, there are ways to take the survey anonymously—for example by inserting a row of XXXs in the fields for first and last names. But it’s not clear whether TCAD staff will “count” anonymous responses in its report to the board of directors or toss them.

For nearly 10 years The Austin Bulldog has providing aggressive investigative reporting to hold local government and local officials accountable. Please show your support to expand Bulldog coverage by making a tax-deductible donation. Whatever you give now will be tripled thanks to matching donors during our NewsMatch  campaign.

Aside from making the link to the survey minimally evident on TCAD’s website, the 2020 Protest Process Survey includes 21 questions. Six of them intrude on personal privacy by asking about gender, marital status, race, ethnicity, education, and income—all before getting to information that TCAD might actually need to know.

Nothing in the survey introduction says answering all questions is obligatory (typically denoted with an asterisk *). However, if you fail to answer even one of the demographic questions then you are not allowed to advance to the next page of the survey.

Questions about gender and ethnicity have a button for “Other/prefer not to answer.” That option is not provided for questions about age, marital status, level of education, or income.

Lastly, there is no indication of uses to which this information may be put. No assurances are offered that such personal information will be closely guarded and not made public—assurances that are routinely offered in professionally conducted surveys.

A professional evaluates the survey

Jeff Smith has been conducting polls and surveys for nearly 40 years, mostly through Austin-based company Opinion Analysts, which he founded in 1980. At my request he took the survey and then provided his opinion in a telephone interview.

His findings were unequivocal.

“There is no legitimate reason to ask any of those demographic questions,” Smith said.

Asking questions about a person’s gender might be appropriate if polling about a candidate, for example to learn whether the survey sample had too many male or too many female respondents, he said.

“That’s not a consideration in this case.”

Including questions about ethnicity might be helpful, for example, if he wanted to find out whether a candidate is polling poorly among Hispanics.

“It looks like they got the demographics questions from generic options,” Smith said.

Merely asking these demographic questions the survey implies that TCAD might mull whether, “it’s worth my time to consider your opinion, to see if you’re an intelligent person,” he said.

Another aspect of the survey is that it is self-selecting. It will not provide a representative sample of what some 400,000 property owners think of the protest process.

“People respond when they’re angry,” Smith said. “Few people will take the time to say you did a good job.”

If you sign up to make a new monthly donation by December 31, your monthly amount will be matched times 12 thanks to NewsMatch 2019. Please make that tax-deductible contribution right now.

Please make your contribution now by clicking this button: