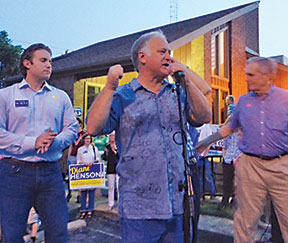 Well you can’t blame the Democrats for wanting what they haven’t won in the last two decades, and that’s the election of the governor who will succeed Rick Perry.

The year 1994 marked the end of an era for Democrats. Governor Ann Richards lost her reelection bid to George W. Bush, but, in a last hurrah, Democrats Bob Bullock, Dan Morales, John Sharp, Martha Whitehead, and Garry Mauro all won another term. Ever since then every statewide race on the ballot has been won by Republicans.

Yet hope springs eternal in eternally deep-blue Travis County, the scene for a Saturday evening Democratic Party rally featuring the tried-and-true combination of barbecue, beer, and stump speeches, all emceed by State Senator Kirk Watson of Austin. A crowd estimated at more than 400 sprawled out over the grounds of the new party headquarters on East Martin Luther King Jr. Blvd.

“This is really a place of hope, right here,” Doggett said. “And every time we walk another block, we call another person who might not otherwise have voted, you write a check, you put up a sign, you expand that hope for Texas. But it’s not just hope for Texas. It’s hope for our entire country.”

“I believe if we work together and pull together, we have the potential by getting just a few women (who) are listening to what Greg Abbott is saying and doing. If just a few people concerned about whether a chemical plant next to their house is going to explode, with Greg Abbott not revealing any of the facts. If they’re listening to Dan Patrick, who has been kind of a Rush Limbaugh wannabe, going him one step further. We pull in some of those folks who haven’t participated with us before, and maybe if we turn out the people that share our values, just maybe with pulling very difficult, we can get just across the finish line. We can’t afford a landslide, but we can afford turning Texas into a win column.”

Watson said, “It’s been a while since there’s been this level of enthusiasm and electricity about our candidate for governor.” He called it a “tremendous honor” to have served in the Texas Senate with Wendy Davis (D-Fort Worth), the party’s gubernatorial candidate.

Watson provided some insight into how it came to be Davis who delivered the filibuster that energized Democrats and propelled her into the national spotlight and the party’s gubernatorial nominee. Watson, as chair of the Democratic Caucus, said a number of Democrats were eager to filibuster on behalf of women’s rights to healthcare but the party wanted to “put a face on it.”

“We wanted to have a woman stand up on that floor and be the person that represented the women of the state of Texas and the men of the state of Texas in that fight. And the good news is that the person we had there to do that for us was smart, was articulate, was ready to take the fight no matter what it meant, and was someone who had the deep passion to represent all of us. Wendy Davis was that person, and Wendy Davis will be that kind of governor for all of us.”

Amber Davis, daughter of Wendy Davis, said, “When it comes to Texas politics, there’s a secret that all smart Democrats and Republicans know: Texas is not a blue state or a red state—it’s a non-voting state.”

She said that for this election Democrats are taking party organization to places that had been written off in past elections, like Ochiltree County, on the far north tip of the Texas panhandle, where 90 percent of voters had cast ballots for Rick Perry in 2010 and Democratic gubernatorial candidate Bill White got just 189 votes in a population of 10,000. For the 2014 election, she said that Democrats already have six full-time volunteers in Ochiltree County, with the goal of creating a ripple that will add to a wave of change in state politics.

A comptroller candidate who can count

State Comptroller candidate Mike Collier noted that he is a certified public accountant and made light of his odd attire—a suit and tie—for this highly informal gathering, which he wore because his staff told him to “wear something comfortable.”

Collier said the state needs to invest in schools, roads, and water, not become addicted to debt and must not raise taxes.

“You need an accountant,” he said, “someone who can count to 20 without taking his boots off.”

State Representative Celia Israel is the newest member of the Texas Legislature by virtue of winning a special election for District 50 in January 2014 to fill the seat vacated by the resignation of Mark Strama.

Israel said she will run the same door-to-door campaign to win reelection in November to a full term as she ran to win the special election.

“If each one of our urban counties turns up the gas a little bit, we turn Texas blue,” she said. “It’s just that simple.”

Diane Henson is a candidate for chief justice of the Third Court of Appeals, where she served a six-year term 2006-2012. She presented her case for the importance of this court’s work by noting that it hears appeals for 24 Texas counties, those cases involving state government regulatory agencies, including fracking cases, tax cases, and utility rate-making cases.

That’s why, Henson said, that special interests and big business are particularly concerned about taking control of this powerful court.

“The special interests are lining up against me, with my opponent,” she said, adding those interests already have five “severe conservatives” filling the seats on this court and the one moderate, Woodie Jones, is about to retire.

“We have to decide: Are we going to keep one moderate pragmatic jurist on this powerful court, or are they going to get them all? We have to fight for this seat,” she said.

Noting that this seat on the court has gone back and forth in recent elections by only 2 percentage points, she called on the crowd to work with her to win.

Henson derided the Third Court of Appeals decision related to the Tom DeLay money laundering case. His colleague’s case went first and the district attorney’s indictment was challenged because checks were involved and checks were not funds under the money laundering statute.

“When you get checks, what do they do in your bank account? They become funds for me. So when my colleagues wrote an opinion that said checks were not funds, I wrote a dissent that then the Travis County District Attorney took the Court of Criminal Appeals and nine members of that court said, ‘Henson is right.’”

She said she was on the panel that ordered DNA testing in the Michael Morton case, leading to his exoneration.

Henson asked the crowd to urge their neighbors to go down the ballot and vote, because “judges matter.”

She closed by saying her campaign bumper stickers were available, and, “I want to see my name on your rear end.”

Only chance to unseat a Travis County Republican

Watson introduced Randall Slagle, candidate for Precinct 2 Justice of the Peace, by dinging the incumbent Republican (Glenn Bass) for not having a law degree and for having a long backlog of cases in that court.

Slagle, a Travis County prosecutor, fired the crowd by announcing, “This is the only race in Travis County this fall in which you can unseat a Republican, the only one.”