The Austin Bulldog
Home City of Austin City Council What do council members do all day?
Facebook
Twitter 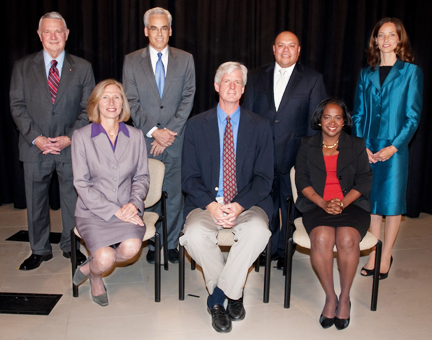 Or Not, in the Case of Council Member Martinez, Who Redacts Hundreds of Entries

Elected officials do a variety of things to carry out their official duties but more than anything else they go to meetings—lots and lots of meetings.

The mayor and all Austin City Council members except Kathie Tovo, who took office in late June, have also been involved in a number of meetings critical to their political futures, dealing with the Travis County Attorney David Escamilla’s ongoing investigation of possible open meetings violations.

These and other events are self-reported in the official calendars maintained by their council offices and, as such, are public records.

When The Austin Bulldog broke the January 25 story about Austin City Council members possibly violating the Texas Open Meetings Act, that investigative report was based, in part, on the calendars published on the city website by four council members.

Those calendars documented the fact that the mayor and each council member participated in hundreds of private meetings in calendar year 2010 to deliberate city business. The calendars showed that that a regularly scheduled series of meetings were held with each other in days preceding posted council meetings.

There is no legal requirement for elected officials to publish their calendars online. Doing so provides a high degree of transparency and accountability.

What’s in the calendars?

The calendars for January through July 2011 published here for Council Members Laura Morrison and Bill Spelman were downloaded from their city web pages.

The calendars for that period for Mayor Lee Leffingwell; Mayor Pro Tem Sheryl Cole; Council Members Mike Martinez, Chris Riley, and Kathie Tovo; and City Manager Marc Ott, were obtained through an open records request filed August 8. Paper copies of the calendars were provided September 1. The City erroneously issued a cost estimate of $1,707 to provide these records. That mistake was called to the city’s attention and the records were ultimately provided at no charge.

In negotiating the release of these calendars with the city’s public information office, The Austin Bulldog allowed the redaction, or blacking out, of entries that involved purely personal events, such as a medical appointment, a kid’s soccer game.

The Austin Bulldog did not agree to redaction of entries for social events, which may involve interacting with people who do business with the City of Austin.

Calendars for the mayor and council members show all seven days of the week. The city manager’s calendar does not include weekends.

Private meetings stopped—The longstanding practice of holding regularly scheduled one-on-one and two-on-one meetings each week before public council meetings was halted after The Austin Bulldog broke the story about this being a possible violation of the Texas Open Meetings Act. Instead, the council started holding regularly scheduled public work sessions that are also streamed online, like regular council meetings.

The calendars provided for Council Members Morrison, Riley, and Spelman, and City Manager Marc Ott reflect all events with none blacked out.

Council Member Martinez redacted 198 entries. Given the high number of his redactions compared to other council members, The Austin Bulldog invited Martinez to provide an explanation. In an e-mail he wrote:

“There could be any number of reasons as to why there were less redactions in other’s responsive information the most obvious of which would be some other personal calendar that some might choose to keep.

“In order for me to meet my Council responsibilities and obligations, as well as those as a father and husband, I keep all personal and public appointments and info on one calendar. As such, the responsive information I provided to you is a direct result of direction from our Law Department regarding what types of information should be provided.

“My wife (Lara Wendler) and I are deeply committed to our son and our community. Lara has many events and engagements as well, and I attend to support her. Our son is extremely active and we make every attempt to attend each and every one of his engagements. Suffice to say, I will not provide calendar information related to my son or my wife—or any other family/personal events for that matter. I would trust that you would consider that information neither responsive nor appropriate for any story you are working on.”

On June 8, Mayor Leffingwell and Council Members Martinez, Riley and Spelman were each, individually, given an “investigation briefing,” possibly concerning the open meetings investigation being conducted by the county attorney’s office. None of the other council members’ calendars reflect such a briefing.

All council members have met with the city attorney, assistant city attorneys, and/or outside attorneys hired to deal with the open meetings investigation at least once, although it is unclear how many of these meetings were involved in the open meetings investigation. Martinez had nine such meetings; Leffingwell had four; Ott had four; Morrison, Riley and Spelman each had two; and Cole had one.

The 2011 calendars January through July

The calendars of the mayor, each council member, and the city manager are published here so that the citizens of Austin may review them and see how their elected officials and city manager use the time for which they are compensated at taxpayers’ expense. (Go ahead, poke around and see what you find.)

To read the 2011 calendars click on the links provided below:

To read the 2010 calendars click on the links provided below: