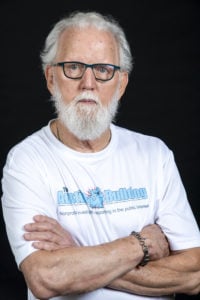 Ken Martin, founder, editor and publisher: Ken got interested in journalism while a career officer in the U.S. Marine Corps. After serving more than 20 years on active duty, including a tour in Vietnam, he completed his career as a major and moved to Austin in 1978 to earn a humanities degree with a minor in journalism at the University of Texas.

Today Ken may be the only living journalist who has worked full-time for publications located in the three major counties of the Austin metropolitan area: Travis, Williamson and Hays. He has been a reporter and editor in the tri-county area since 1981, including associate editor of Third Coast magazine (1981-84), managing editor and janitor of the Dripping Springs Dispatch (1984-85), and county and political editor of the Williamson County Sun (1986-89).

Ken was an investigative reporter for the Austin Business Journal 1989-1990 and served as editor 1990-1994, a period in which the newspaper won numerous awards for journalistic excellence. In 1995, he started the In Fact weekly newsletter covering Austin City Hall and local politics. Beginning in 1998, while still publishing In Fact, he also owned and edited Texas Public Utility News for 13 months, producing a twice-monthly newsletter covering the Texas Public Utility Commission. In 1999, Ken began publishing the In Fact newsletter five days a week, making it In Fact Daily, Austin’s first online newsletter. He sold In Fact Daily in 2000 and, after several changes in ownership, today it continues publication as the Austin Monitor.

Meanwhile, in 1997, Rebecca Melançon and Ken founded The Good Life magazine, which he edited for more than 11 years. The magazine published numerous special reports, including five in 2008 alone, before ceasing publication in January 2009 due to the economy.

After the magazine folded Ken won a “New Voices” grant from the John S. and James L. Knight Foundation to start The Austin Bulldog, which began online publication in April 2010.

When the Me Too movement collides with Black Lives Matter somethings’s got to give, October 30, 2020