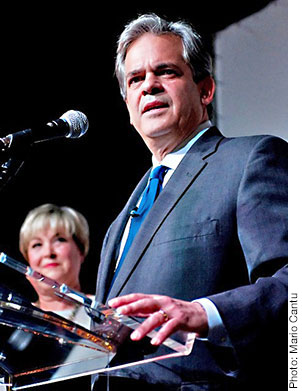 Laura Morrison set the previous record by getting 65.0 percent of the votes in her 2008 runoff against Cid Galindo. Robert Barnstone got 64.98 percent in beating Sam Guzman in a 1988 runoff.

Lee Cooke in 1988 set the prevous record for margin of victory in a mayoral runoff when he got 58.43 percent of the votes to unseat incumbent mayor Frank Cooksey.

Friedman’s campaign consultant in that election, Peck Young, verified this, saying, “Jeff was the youngest when he was elected and Greg beats him by a year.” Casar will turn 26 in early May.

Casar ran a smart campaign to soundly defeat now two-time loser Laura Pressley (she got an impressive 44.48 percent of the votes in her one-on-one challenge of incumbent Martinez in 2012).

Casar’s District 4 victory of 2,851 votes (64.62 percent) to her 1,561 (35.38 percent) resulted in part from her campaign’s faux pas. Perhaps not the least of which was getting involved in a discussion of the 9-11 attacks being an inside job, which drew intense media coverage, and her latest mail piece attacking Casar for, among other things, allegedly being an atheist.

Still, last night Pressley couldn’t resist a parting shot. A little after 8pm as early voting results showed she was already behind by more than 700 votes, she insisted on being quoted as saying, “Greg sold District 4 to special interests.”

In response Casar told The Austin Bulldog, “My track record stands up for working people and progressive ideals, even when special interests stood in the way. I’m going to stay committed to that.”

Delia Garza became the first Latina council member when she won 65.76 percent of the votes in a four-person race November 4.

Garza is also part of the first female majority council ever elected—which is actually a super majority of seven, including Ora Houston in District 1, Garza in District 2, Ann Kitchen in District 5, Leslie Pool in District 7, Ellen Troxclair in District 8, Kathie Tovo in District 9 (the only incumbent who will serve on the new council when it’s inaugurated January 6), and Sheri Gallo in District 10.

The 10-1 council will continue to have one African American in the person of District 1 Council Member Houston. This is a dilution of political power from the one black vote on a seven-member council that has been in effect since 1971, but retains a foothold despite the steadily declining African American population.

The only time in which the council has had more than one Latino since 1975—when John Treviño Jr. was the first one elected—was 2001-2002 when Gus Garcia was mayor and Raul Alvarez served in Place 2. Garcia chose not to run for reelection in 2003, once again reducing Latino representation to one seat.

The major GOP push to get seats on the city council was highly successful when all three endorsed candidates endorsed by the Travis County Republican Party (TCRP) won, including:

The fact that the TCRP was going all out for these three endorsed candidates was disclosed in an ***ACTIVIST ALERT*** e-mail calling for runoff election volunteers.

“Your support and volunteer efforts could make the next Austin City Council less liberal,” said party chairman James Dickey, as a preface to the message from Michael Searle, project coordinator for the council elections.

“For the first time, we have the opportunity to elect Council members of principle who understand that the burden being put on taxpayers is a direct result of irresponsible spending at City Hall,” Searle wrote. “The entrenched interests that have long controlled City Council will not give up those spots without a fight, and make no mistake, they are AFRAID of the candidates we are working with, who want to shake up a system badly in need of transparency, accountability, and fiscal sanity.”

Jan Soifer, Travis County Democratic Party chair, told The Austin Bulldog last Friday that her party had not asked people to block walk or work phone banks because the campaigns were already doing that in Districts 4, 6, 8 and 10.

“What we’ve done is raise money to do independent expenditures,” Soifer said, mentioning mailers sent to Democratic voters and ads in The Austin Chronicle.

Soifer said the party had not done any polling, nor had she seen any polls. She noted that the majority of voters in all 10 council districts had voted for the Democratic gubernatorial candidate Wendy Davis. “But with low turnout expected next week we could lose one or more of those districts,” she said.

And lose they did.

Not only does this sibling matchup qualify as another facet of Austin’s weirdness, it was weird enough to catch the attention of the Wall Street Journal, which ran a story December 14.

While both Almanza, age 62, and Renteria age 64, have been activists their entire adult lives they have far different styles. She has been an in-your-face firebrand with the nonprofit People Organized in Defense of the Earth and her Resources (PODER). She and some of her supporters have never been shy about using the R (racism) word. Big brother Pio, however, has been more moderate and worked within the system.

J.D. Gins, executive director of the Travis County Democratic Party, pointed to Renteria’s four decades of political activism in support of other candidates as a key factor.

Renteria has an enormous collection of campaign buttons pinned on the wall to prove his deep experience in political campaigns. He said he worked in every one of the campaigns represented in the collection.

The buttons show his early support, for example, for Richard Moya for County Commissioner, elected in 1969 (the first Latino to win a Travis County office); Gonzalo Barrientos (now a retired state senator) elected to state representative for the first time in 1974; and John Treviño Jr., the first Latino elected to the City Council in 1975 (after an unsuccessful effort in 1973).

While everyone is currently focused on implementing 10-1 it seems worthwhile to observe how and why this change began.

It started in a not terribly crowded lecture hall at Huston-Tillotson University (HTU) in February 2011. The Austin Bulldog reported on that meeting March 7, 2011.

Mayor Lee Leffingwell had announced in his State of the City speech on February 25, 2011, that he wanted to see a plan for increasing the size and geographic representation of the city council on the ballot in a November 2012 election.

The mayor’s proposal was only a day old when a group of Austin citizens—including liberals, conservatives and minorities—gathered at HTU to discuss forming a coalition to push its own plan through a petition drive that could get on the ballot in November 2012.

The basic motivation driving the movement was a de facto inequalities that resulted from at-large elections, as documented by The Austin Bulldog in a groundbreaking mapping project of 40 years of election history 1971 through 2011. The project visually displayed the unalterable fact that large parts of Austin were not represented—or were grossly underrepresented—because of the an at-large system of electing council members.

While this was not an entirely new revelation, it had never before been so easily grasped. The project showed that in the 26 elections held over that four decades there had been 100 council seats and 17 mayoral seats filled—49 of which were won by people who lived in just two zip codes in West and northwest Austin (78703 and 78731). Of the 17 mayors elected in that period 15 lived in one of those two zip codes. Only 19 of 100 council contests were won by anyone who lived south of the Colorado River, where about 40 percent of the population resides. Political power was highly concentrated within the central city.

The new political group wanted to change that. The group operated as Austinites for Geographic Representation (AGR). Under the leadership of Linda Curtis and political consultant Peck Young, AGR over the next year and a half built a powerful grassroots coalition of some 30 community organizations.

After that initial get-together AGR held regular meetings, slowly growing the organization by making presentations to other groups that, one by one, were drawn into and became part of a potent force for change. These included such diverse groups as the Austin Neighborhoods Council, League of Women Voters Austin Chapter, NAACP Austin Chapter, the Travis County Republican Party, two local chapters of the League of United Latin American Citizens (LULAC), University of Texas at Austin Student Government, People Organized in Defense of the Earth and her Resources (PODER), Austin Gray Panthers, and many more.

Volunteer attorneys Steve Bickerstaff drafted and Fred Lewis refined a lengthy amendment to the Austin City Charter and AGR launched a petition drive to get that measure on the ballot.

Meanwhile the 2012 Charter Revision Committee appointed by the City Council met for six months and ultimately voted 8-7 to recommend that the council to put the 10-1 plan on the November 2012 ballot.

The City Council did vote to put the 10-1 plan on the November 2012 ballot even before the AGR petition drive had been completed, but AGR, fearing a betrayal in which the council might at the last minute pull the 10-1 off the ballot, completed its petition drive, submitted the petition, and got the plan on the ballot intact.

A key part of AGR’s 10-1 plan was that council districts would be drawn by an Independent Citizens Redistricting Commission, similar to the system used in the State of California that Bickerstaff had adapted for use in the City of Austin.

A minority faction of the Charter Revision Committee lobbied the council for an alternative plan that would include two at-large council seats. The City Council did then put an 8-2-1 plan on the same ballot.

Political consultant David Butts pushed hard for the hybrid 8-2-1 plan and told The Austin Bulldog that without at-large seats voters would defeat the single-member-district plans, just as they had a half-dozen times before.

AGR turned in its petitions and on July 26, 2012, City Clerk Shirley Gentry announced that some 22,435 signatures were valid, more than enough to meet the 20,000 minimum needed to qualify for the ballot.

AGR got right to work organizing the campaign that would ultimately win strong voter support, despite the electorate’s previous six defeats of anything that would do away with at-large elections, in which all voters got to vote for all candidates on the ballot.

A group backing the hybrid plan, Austin Community for Change, waged a campaign to attract voter support but was outspent and out-organized by AGR.

Because 10-1 (Proposition 3) netted 60.16 percent of the votes and 8-2-1 (Proposition 4) got 51.08 percent, the pure single-member-district plan emerged the winner and is now finally being implemented through yesterday’s election.

And now an 11-member Austin City Council with a brand-new mayor and nine novice district council members will take us into the future.