Updated Wednesday, October 1, 2014 10:52am to add Delia Garza’s loans to her campaign
Updated Thursday October 2, 2014 6:07am to identify Jimmy Paver as a District 7 candidate

These financial statements are separate and apart from the contribution and expenditure reports required in connection with election campaigns.

Personal resources provide a significant advantage if candidates choose to invest in their campaigns. But that advantage is diminished if not accompanied by the work it takes to build a broad base of support.

Campaigns are not won with checkbooks alone, but according to Campaign Finance Reports filed July 15, which reflected fundraising and expenditures through June 30, 21 candidates had already loaned their campaigns a combined half-million dollars—$509,926 (not $504,911 as first stated) to be exact. (More about that later.) The next batch of campaign finance reports, due October 5, will no doubt reflect even more personal spending to finance political ambitions.

The Austin Bulldog’s investigation of personal finances illustrates the vastly different resources the candidates can bring to bear as they race toward the November 4 election. And to carry them through to the December 16 runoff—if they make the initial cut. This analysis indicates the candidates range from the mega-wealthy to the downright poor. One of the candidates reported drawing unemployment benefits last year.

Under state law and Austin City Code candidates and incumbents must file two different kinds of sworn financial statements. Both kinds of statements must be signed and sworn to as being true, correct, and fully complete showing all required information, and are submitted under penalty of perjury.

However, unlike campaign finance reports—which are posted for easy public access on the Internet—these financial statements are kept on file in the City Clerk’s office.

Through requests filed under the Texas Public Information Act, The Austin Bulldog obtained statements filed by the candidates and publishes them here as part of our mission to bring more transparency to local government and allow increased scrutiny of those elected by permitting citizens to monitor their actions for possible conflicts of interest.

Links for each candidate’s statements are provided at the bottom of this article. 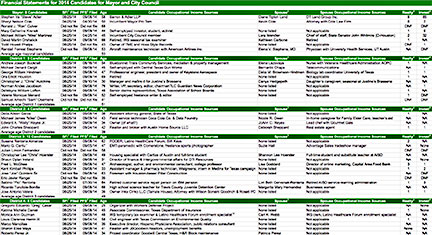 In addition, The Austin Bulldog constructed a spreadsheet, Financial Statements for 2014 Candidates for Mayor and City Council, that provides an overview of sources of income for each candidate and for the candidate’s spouse or domestic partner.

The City Clerk notified candidates of the requirement to file these statements in a May 5, 2014, memo. The City Clerk also published a Candidate Packet that contains links to the forms to be used. (See Tab 6 of the Packet.) Yet eight of the candidates failed to file one or both of the statements.

It should be noted that these statements cover the candidates’ financial activity in 2013 and that information is now nine months old.

Personal Financial Statements are not only kept out of public view but in accordance with Local Government Code Section 145.007(b), will be released by the City Clerk’s office only after the requestor completes a form that indicates the date of the request, the name and address of the requestor, and the name of the organization the requestor represents.

It seems the legislators want to be able to track who is snooping into their personal business, but the same rule governing access applies at every level of Texas government.

The good news—so far as public access is concerned—is that nothing prevents media organizations from getting copies of Personal Financial Statements (after filling out a form for each of the 78 candidates, as The Austin Bulldog did for this investigation) and posting them online.

This is the fourth straight year that The Austin Bulldog has obtained and published current financial statements for the mayor, council members, and candidates (although this investigation does not include the incumbents who are not running for election).

As required by Local Government Code Section 145.008 the City Clerk’s office on September 10 notified the City Attorney of failure to timely file a Personal Financial Statement. Notification was furnished in a Memo to City Attorney and Integrity Officer Re: Late Filings.

A copy of the memo, obtained with a public information request, indicates that 17 candidates did not timely file a Personal Financial Statement.

The Austin Bulldog’s follow-up requests for copies of late statements showed that six of the 17 candidates still had not filed by September 18. The other 11 candidates filed after the deadline.

The six candidates who did not file a Personal Financial Statement are:

• District 2 candidate John Charles Sheppard (who filed September 24 after being contacted by The Austin Bulldog).

• District 3 candidate Julian Limon Fernandez (who after being contacted by The Austin Bulldog said he would file September 29).

A candidate commits an offense for knowingly failing to file a Personal Financial Statement, according to Local Government Code Section 145.009. Such offenses are a Class B misdemeanor.

The City Attorney is tasked by Local Government Code Section 145.010(b) to notify by certified mail those candidates who failed to file a Personal Financial Statement. Candidates who fail to file before the 30th day after receiving such notice is civilly liable for an amount not to exceed $1,000.

The Austin Bulldog filed a public information request September 25 for copies of letters or other correspondence the City Attorney has sent to candidates who failed to file. That request is still pending.

In addition the state-mandated Personal Financial Statement, non-incumbent candidates were required by City Code Section 2-7-74 to file a Statement of Financial Information by August 25, 2014. (Incumbents filed these statements in April and submitted updates in July.)

Seven candidates did not file a Statement of Financial Information, according to the City Clerk’s response to The Austin Bulldog’s public information request for copies. These candidates are:

City Code Section 2-7-99 provides a penalty for failure to file in the form of a fine not exceeding $500. City Code Section 2-7-41 sets forth the procedure for filing sworn complaints about violations, which are subject to hearings by the City’s Ethics Review Commission.

Key differences in the two statements

Control over assets—Government Code Section 572.023(a) requires Personal Financial Statements to include the financial activity of the candidate or elected official’s “spouse and dependent children” if the filer “had actual control over that activity for the preceding calendar year.”

City Code provides no such exemption, hence there is a significant difference in the financial activity reported in the two statements when the filer chooses to exercise that option, e.g., City Council Member Mike Martinez, who always omits significant investments from his Personal Financial Statement that are reflected in the Statement of Financial Information.

State law does not address the issue of domestic partnerships, so such reporting is not required in Personal Financial Statements.

Aside from personal wealth, or the lack of it, the overarching trends revealed in the records of those who filed:

Marital status—A total of 29 candidates, or 37 percent, did not report having a spouse or domestic partner.

Business ownership—A total of 25 candidates (or their spouses) have an ownership interest in a business, other than just owning stock in a company. Mayoral candidate Adler, with wife Diane Tipton Land, heads that list with 24.

Investments—Thirty-nine candidates reported having stocks or equity ownerships valued at more than $5,000. District 10 candidate Marjorie Pressley “Margie” Burciaga topped that list with 105 such investments. The total value of investments are not reported, only that the candidates have a substantial interest.

Non-occupational income—Thirty-two candidates reported having sources of income exceeding $5,000 each that came from interest, dividends, royalties, rents, trust disbursements or other non-occupational sources. Adler headed that list, too, with 24 such sources.

Demographics— A person’s birthdate is not disclosed in financial statements but The Austin Bulldog’s research through other records and verified with candidates indicates the oldest person on the ballot is District 1 candidate Norman Jacobson, 76. The youngest is District 4 candidate Greg Casar, 25.

None of the candidates in Districts 1 and 2 (deleted District 2) had made loans to their campaigns through June 30.

Candidates in all other contests boosted their campaigns, including:

• Mayor candidate Steve Adler $194,000. He’s an outsider facing two incumbents on the City Council since 2006: Sheryl Cole and Mike Martinez, neither of whom have dipped into personal funds so far.

• District 8 candidate Becky Bray $50,000. District 8 is the only contest in which every candidate is literally buying into a campaign.

• District 9 candidate Kathie Tovo $15,000. She still has $61,807 in campaign debt from previous years, but that’s a formality, given that just one of her and husband Tom Hurt’s reported sources of non-occupational income, Ratliff Riker LP, grossed $900,000 in 2013 from sales of oil, gas, and surface easements.

In these links the names of statements are abbreviated, as follows:

• PFS is the Personal Financial Statement required by the Local Government Code.

• SFI is the Statement of Financial Information required by City Code.

DNF indicates the candidate did not file the statement, according to the City Clerk’s office.

The Austin Bulldog operates as a 501(c)3 nonprofit and depends upon the community it serves for support. You can help fund our investigative reporting by making a tax-deductible contribution. Now is an especially good time to contribute as it would help us to raise matching funds for a $50,000 Challenge Grant that would provide a quantum increase in the volume of high-quality reporting we are able to publish.

Austin Governed By the Well-to-Do: November 2014 elections may deliver economic diversity to next city council, May 17, 2013

How Rich Are Austin’s Mayor and Council Members? Most are pretty well off by local standards, with extensive holdings in real estate and investments, June 27, 2012