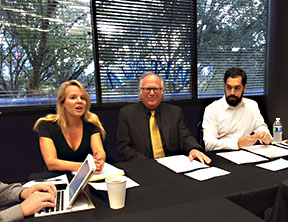 State Representative Todd Hunter (R-Corpus Christi), who chairs the powerful House Calendars Committee, and the two co-chairs of the Freedom of Information Foundation of Texas laid out the details of proposed legislation that the press and other open government advocates hope will succeed. And some they wish are tossed into the trash heap.

Among the array of proposed legislation are bills that if enacted would:

• Make public the records of campus police at private institutions of higher education,

• Reemphasize that journalists may legally report on whistleblower allegations of public concern,

• Raise the bar for closing juvenile courts to the public,

• Authorize the Texas Attorney General to prosecute violations of the Texas Open Meetings Act or Texas Public Information Act when local county and district attorneys decline to do so.

Hunter, who has served eight terms in the Texas House, four as a Democrat and four as a Republican, authored two of these proposed bills.

Attorney Laura Prather of Haynes & Boone LLP, who co-chairs the Freedom of Information Foundation of Texas with attorney Arif Panju of the Institute for Justice, introduced Hunter as “by far the best advocate” for open government. She said he was instrumental in passing important legislation in previous years, such as the Anti-SLAPP bill that protects First Amendment rights, and providing public access to electronic communication on personal devices of public officials.

After reporter Libby Averyt of the Corpus Christi Caller-Times was jailed in 1990 for refusing to reveal details of her interviews with a murder defendant, Hunter, many years later, helped to negotiate the reporter’s privilege bill, formally known as the Free Flow of Information Act, that allows journalists to protect the identity of their sources. “It’s terrible that a reporter would be jailed for protecting her source,” Hunter said. “That’s an injustice….”

Prather drafted the Free Flow of Information Act and was lead negotiator to get it passed in 2009 after decades of effort by many. She said that Hunter, who at the time was serving as chairman of the House Judiciary and Civil Jurisprudence Committee, was crucial to passage of the Act, unanimous in both the House and Senate.

“Only in Texas can a law that has been 30 years in the making ultimately pass with flying colors and have the support of the most liberal and the most conservative lawmakers alike!” Prather wrote in an article published online by her former law firm.

Prather told The Austin Bulldog, “It was only because he required our chief opposition, the District Attorneys, to sit down with us for multiple rounds of negotiations, which Chairman Hunter oversaw, that we were able to get agreed upon language that passed. Chairman Hunter’s leadership was not only instrumental but integral to the passage of that piece of legislation.”

Hunter, who has served in the Legislature under five governors, said, “My view is why shouldn’t the Legislature write the rules on public information and not the courts? It’s our responsibility.”

Compel information release—The law is already clear about the fact that it is the content of an official’s correspondence, electronic or otherwise, that matters when determining whether the correspondence is public information—not the device upon which it may be kept. If the communication deals with public business then it’s a public record. Nevertheless some officials have refused to release public information from private devices or accounts, even after an attorney general’s opinion ordered it released.

Compounding the problem of public access, some governmental bodies claim they do not have legal access to the records because they are not the designated custodians of the records.

The bill if enacted would have no effect on pending cases such as Adkisson et al v. Paxton, et al, which are governed by older laws. In that case, reported by The Austin Bulldog March 10, 2015, Adkisson refuses to release e-mails about Bexar County business conducted on his private devices. The Third Court of Appeals, like the district court, ordered the records to be released.

Let AG prosecute—It’s been said that a District or County Attorney’s discretion about whether to prosecute is wide and deep. Typically those who file a criminal complaint have no place to turn if the prosecutor declines to do so. HB 3997 authored by Representative Gary Elkins (Houston) would if enacted, for violations of the Texas Open Meetings Act and Texas Public Information Act, give the Texas Attorney General authority to prosecute but only if the local prosecutors decline to do so.

Anyone who believes a violation of either Act has occurred would be able to file a complaint with either the attorney general or the local county or district attorney in the county in which the governmental body involved is located.

The attorney general or local prosecutor must decide before the 31st day whether the alleged violation was committed, whether an action will be brought against the governmental body, and notify the complainant in writing of those determinations.

Donnis Baggett, executive vice president of the Texas Press Association, spoke in favor of this legislation.

“You almost never hear of a case where a county or district attorney chooses to enforce these laws because they don’t like to prosecute local officials,” Baggett said. “Most often they are just warned not to do it again. There needs to be more.”

Travis County Attorney David Escamilla, however, did step up and thoroughly investigate the mayor and city council when in January 2011 The Austin Bulldog exposed the Austin City Council’s institutionalized practice of conspiring to avoid compliance with the Texas Open Meetings Act.

After a 21-month investigation these officials were provided with evidence of probable cause for prosecution of numerous violations and were allowed to sign deferred prosecution agreements to avoid being charged and, if convicted, sentenced to up to six months in jail. The Austin Bulldog’s story about that outcome, Deferred Prosecution Ends Open Meetings Investigation, was published October 24, 2012.

The bill would make private campus police records public and accessible to citizens under the Texas Public Information Act by specifying that a campus police department of a private institution of higher education is a governmental body with respect to information relating to law enforcement activities.

Third-party allegations—SB 627 authored by Senator Joan Huffman (Houston) is a reaction to a recent opinion rendered by the Texas Supreme Court. The bill would expand Section 73.002 of the Civil Practice and Remedies Code.

That section already prevents libel actions for fair, true, and impartial accounts of a judicial proceedings (such as The Austin Bulldog published October 7, 2014, “Candidate Lost Custody Over Abuse,” about Don Zimmerman). This bill would expand protection to include publication of allegations made by a third party regarding matters of public concern, regardless of the truth or falsity of the allegations.

If this legislation is enacted journalists would have greater legal protection when reporting on information provided by whistleblowers.

Open juvenile courts—HB 1803 authored by Representative Craig Goldman (Fort Worth) proposes that before a juvenile court proceeding can be closed there must be a written motion by one of the parties, followed by a hearing in open court and findings to support the closure if it’s to be done. Members of the public and parties in the case would have the right of appeal.

The premise at work here is that open criminal courts protect the public as well as the defendant.

Videotaping police officers—Several bills are in play that would affect the rights of citizens and journalists to videotape or photograph police officers who are performing official duties. HB 1035 by Representative Eric Johnson (Dallas) and SB 621 by Senator Craig Estes (Wichita Falls) would protect these rights.

But HB 2918 by Representative Jason Villalba (Dallas) would make it a misdemeanor for a non-journalist to film, photograph or document a police officer within 25 feet. The latter bill does not provide an exception for online journalists or others who are not affiliated with television, newspapers or magazines.

Among the pending bills are some that open government advocates view as detrimental.

No newspaper notices—No less than five bills propose to, effectively, widen the digital divide by allowing governmental bodies to post public notices only on the their websites and no longer require publication in printed newspapers. To be informed under these proposals, a resident would need to have Internet access and would need to search various agency websites to find these notices.

Non-residents excluded—HB 1118 authored by Representative Mike Schofield (Houston) would allow government agencies in Texas to ignore public information requests filed by anyone whose primary residence is not in the state of Texas.

Freedom of Information Foundation of Texas co-chair Arif Panju said that some states, such as Virginia, have similar laws.

“Our position is government accountability holds people accountable and this bill reduces the number of people who do just that,” he said. “While some argue this would save funds, think tanks and others out of state would be denied access” to Texas public information.

Co-chair Prather added that this bill if enacted would “harm the desire of businesses to come to Texas” because it would make it difficult for them to obtain information before deciding to relocate.

Kelley Shannon, executive director of the Freedom of Information Foundation of Texas, hopes the public will be concerned about the need to improve laws that promote open government.

“We urge Texans to become familiar with the state’s open government laws and the proposed legislation to strengthen them,” Shannon said. “Access to information and the right of free speech are essential to participation in our democracy. Texas has a deep history of commitment to open government, and we at the FOI Foundation expect to see that exhibited again this legislative session.”

Related Bulldog coverage: This is our 46th article covering problems and progress in open government.

Will I Said Come On Over Baby, Whole Lot of Meetin’ Goin’ On: Council Member Chris Riley tops the chart with 256 private meetings, January 30, 2011