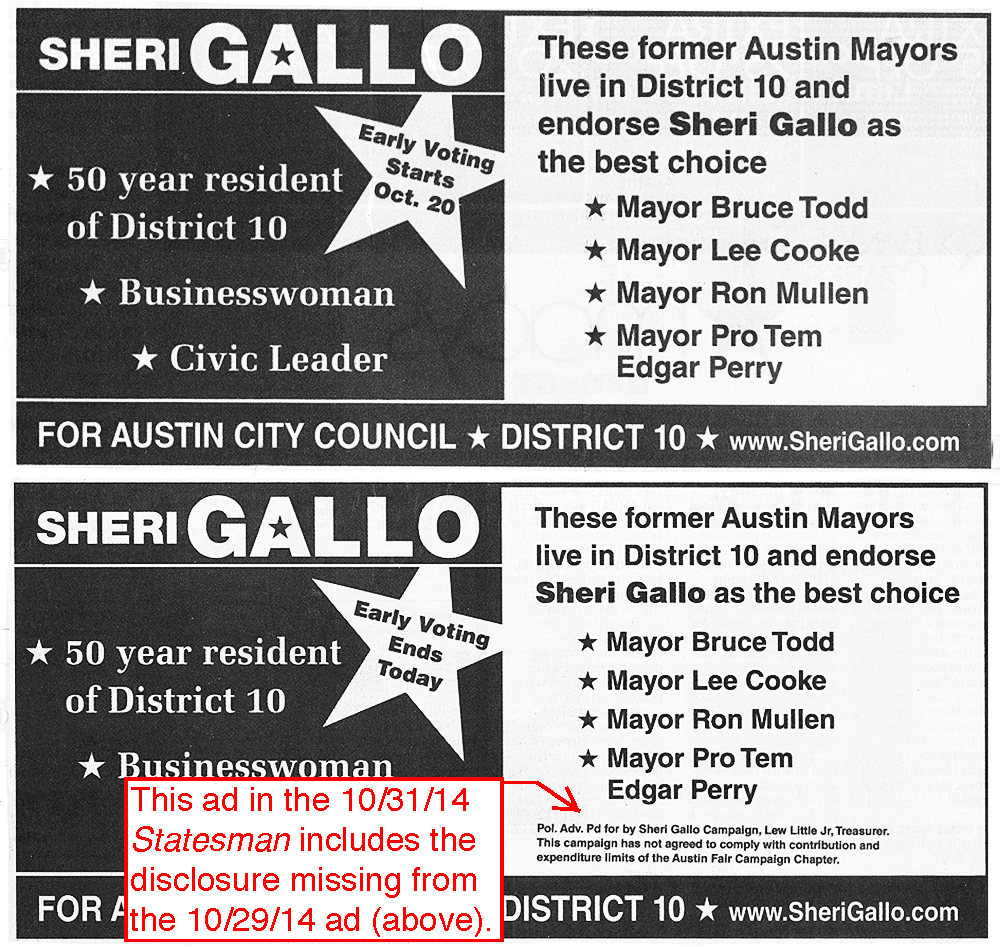 Wednesday ad and newspaper wrappers both failed to include required statements

District 10 candidate Sheri Gallo’s political advertising published in the Austin American-Statesman and printed on wrappers for subscribers’ newspapers did not include key disclosures required by the Texas Election Code and Austin City Code.

Texas Election Code Section 255.001 requires disclosure of the fact that express advocacy is political advertising and the full name of the person who paid for it. The disclosure required by Austin City Code Section 2-2-14 requires stating whether the candidate has—or has not—agreed to comply with contribution and expenditure limits of the Austin Fair Campaign Chapter.

In a telephone interview today, Gallo said, “We realized the problem Wednesday evening and contacted the paper.”

“I take full blame,” Gallo said. “It’s my duty to make sure things like this don’t happen.”

The 4-1/4-inch by 9-1/4-inch ad published on page A6 of the October 29 Statesman focused on a few of her qualifications and notes she has been endorsed by three former Austin mayors and a former mayor pro tem.

A new ad published in today’s Statesman page A7 includes both required disclosures. Gallo said corrected ads will also be published in the Statesman on Saturday, Sunday and Monday.

Gallo’s advertising was also printed on polybags in which Statesman subscribers received their newspapers and it contained the same message as her initial print ad, and it too did not include the required disclosures. (My newspaper was delivered in these bags three times recently and my home is in District 9—not District 10.) Gallo said the polybags were printed a month and a half ago.

Gallo said she had called the city’s Ethics Review Commission and asked if she needed to self-report the problem and was told no, unless a complaint was filed. Assistant City Attorney Sabine Romero confirmed that Gallo had called. Patricia Fraga of the city’s Public Information Office said no ethics complaint had been filed over this adverting.

Gallo’s campaign finance report filed October 27 (See Schedule F, page 18 of the pdf) indicates that on October 2 she paid $3,120 to Cox Austin Publishing for the polybags.

Johnny Flores of the Statesman advertising department said the newspaper charges $80 per thousand for the polybags and requires a minimum order of 26,000. At $80 per thousand, Gallo’s payment would have defrayed the cost of 39,000 polybags.

Flores said the Statesman delivers polybagged papers by zip code and does not make deliveries that would more closely conform to the new City Council Districts.