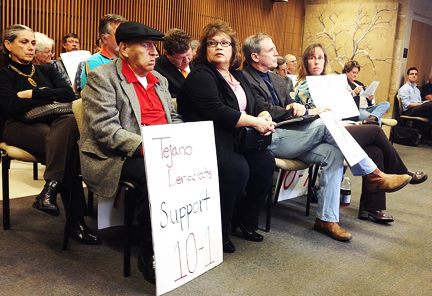 Former State Senator Gonzalo Barrientos knew things might get dicey at the final scheduled meeting of the 2012 Charter Review Commission he chairs.

He brought in retired Travis County District Judge Bob Perkins, who sat on the 331st District Court bench for nearly three decades, to referee as parliamentarian, if need be.

It was a guaranteed evening of high drama given the scheduled final vote to decide what form of electoral system the committee would recommend to the Austin City Council. That vote culminated five months of public meetings in which the committee members listened to hundreds of citizens and heard the advice of several attorneys well versed in election law and compliance with the federal Voting Rights Act.

After voting 12-2 to recommend that a measure be put on the ballot to have an Independent Citizens Redistricting Commission draw council district lines should voters should approve some form of geographic representation—something voters nixed six times before between 1973 and 2002—the committee was at last ready to deal with what form of geographic representation to recommend.

During a sometimes heated and often passionate discussion that lasted nearly an hour, the deeply split committee was unable to reach a compromise.

The final vote was to recommend the 10-1 plan—in which 10 council members would be elected from geographic districts and only the mayor elected by all voters—passed 8-7.

The vote on a previous motion to recommend a 10-2-1 plan, where the mayor and two council members would be elected at large, failed 7-8.

There were calls for compromise that would unite the group and strengthen its recommendation for what the City Council should put on the ballot in November but in the end that was fruitless.

Committee members budged not one inch from the positions they had announced in previous public meetings.

As soon as the committee started to discuss what recommendation to make regarding a new council structure, Nelson Linder, president of the Austin NAACP, immediately moved to recommend the 10-1 plan long advocated by Austinites for Geographic Representation, whose members packed the board and commission meeting room at City Hall, many holding signs.

Fred Lewis, an attorney with extensive experience in election law and someone who served on previous Charter Review Commissions for the City of Austin, immediately seconded Linder’s motion.

At which point former State Representative Ann Kitchen offered a “friendly amendment” that ultimately was not accepted as friendly and was treated as a substitute motion, which had to be considered first.

“I’d like to come up with a recommendation that’s agreeable to everyone,” Kitchen said. “I believe that’s important.”

Fred Cantu, who chairs the Austin Tejano Democrats, pointed to the evening’s earlier discussion of a decades-old lawsuit settled by the U.S. Supreme Court that decided at-large seats diluted the impact of minority voters in Dallas, leading that city to adopt a pure district plan.

Cantu also emphasized the endorsement of the 10-1 plan by legislative staff attorney Luis Figueroa of the Mexican American Legal Defense and Education Fund office in San Antonio and attorney David Richards of Richards Rogers & Skeith LLP of Austin, who for many decades has been involved in election district legalities. He also mentioned the support for change testified to by Gary Bledsoe, president of the NAACP of Texas.

Moffat said she was a “huge supporter of geographic representation” but added, “I want representation for all communities and I don’t see that happening without at-large seats.” She pointed to the Austin Independent School District’s board of trustees, which combines geographic districts with two at-large seats and currently has a non-white board majority. “Austin will support this (10-2-1) because we see it in the AISD elections.”

Moffat added that the committee had “heard clearly from Asian Americans” about the need for at-large seats.

Delia Garza said she wanted not only more Hispanic council members but fair representation for average citizens. “The idea we need at-large seats is patronizing in a way,” she said, like “saving seats for smart people.”

“People in my area are able to grasp larger issues. We’ve heard from people all over Austin that want the 10-1 plan,” Garza said.

Fred McGhee, PhD, a past president of the Black Austin Democrats, said big-city councils with geographic districts use some form of “ward courtesy” that may be divisive. He said Austin’s city government has “always found ways to come together, but I don’t see changing to an all-district plan getting us there. We need some form of at-large seats.”

Attorney Margaret Menicucci said she was concerned about a “drastic change” to all geographic districts, noted the committee had not discussed the implications of having a much larger city council, and said having a hybrid system would be beneficial.

Attorney Richard Jung of Jung & Associates PLLC is vice president of the Korean American Association of Greater Austin and board member of the Network of Asian American Organizations.

Jung has been a tireless advocate on the committee for some at-large seats on the council as the best chance to have an Asian American win a council seat (a feat accomplished only once before). He said he sensed a “lack of respect” for what seems like being told “someone else knows better.”

Chairman Barrientos rebutted Jung’s comment, saying “I’ve not seen any lack of respect on this committee.”

Linder said there was nothing unfair about advocating for a pure district form of representation and noted that Asian Americans could be a majority in a coalition formed to run for city council.

Jung said he had previously worked on building coalitions in the Washington, D.C., and never said coalition building is not important, but added, “What’s coming back is, our community can’t have a voice of its own.” As he has often done before, he emphasized that no one on the council has the perspective or insight needed to address the issues of Asian Americans citizens.

Ted Siff said that 14 members of the committee had previously voted for some form of geographic representation. “There are minority communities that are not geographically concentrated,” he said, “and the 10-1 plan does not acknowledge their existence.”

Fred Lewis said, “No one intends disrespect. It’s not personal, it’s just that people disagree on what’s best for this city.”

David Butts, who has enjoyed decades of success as a political campaign consultant, tried to dispel the idea that even 10 districts would be geographically small enough to allow an effective door-to-door campaign to succeed.

“Who’s going to provide that money?” he said, suggesting that single-member districts are not immune to the potentially corrosive effects of political contributions. “We have 150 state representatives and they are heavily influenced by money,” he said. “If we increase the number of districts it will change elections dramatically—and not all for the good.”

Delores Lenzy-Jones, a former Dell Inc. controller and president of the Austin Chapter of the National Black MBA Association, said she lives in an area that is predominately Asian American, but believes that the 10-1 plan is representative.

Shortly before votes were cast on her motion for the 10-2-1 plan, Kitchen said, “I made the motion in an effort to reach consensus. When we walk out of this room we will have to work together to get change.”

Before ordering a roll-call vote, Barrientos said, “You’ve all expressed your minds and your hearts, and I know you believe the words you speak. You’re all here for the common good,” he said, emphasizing “the common good.”

Voting for the 10-2-1 plan were Kitchen, Butts, Jung, McGhee, Menicucci, Moffat, and Siff, one shy of a majority. The motion failed 7-8.

The committee then immediately considered Linder’s original motion for a 10-1 plan, which he introduced before the vote.

“There are many reasons why I made this motion,” Linder said. “In past four months we have talked to various people in various organizations, and it’s very clear they want to make a change, and they deserve to make a change.

“I know there are fears and concerns about change, but I believe that having a district-based system would actually encourage cooperation. And more importantly it would address voter apathy, and take some of the money out of our current system. It would really also address the amount of racism as well, which is a big factor. …

“I’m very clear in putting forth this motion. And I feel very confident that this will make us a more inclusive city, that involves more different groups, that empowers neighborhoods to have their own representatives, but also overall to give this city a much better reputation in terms of having inclusive representation.”

The committee will meet one last time to review the package of recommendations that staff will prepare for forwarding to the City Council.