“I still believe that if your aim is to change the world, journalism is a more immediate short-term weapon.” — Tom Stoppard

“You’re an idealist,” he said, he who was my immediate superior.

At the time I was a major in the U.S. Marine Corps serving at my last duty station before finishing that career and preparing to enter a new one.

That was 1978. I was about to move to Austin, earn my humanities degree from the University of Texas, and put my idealism to good use as a journalist.

I was just three score and ten when I was preparing to launch the Bulldog a decade ago. I wrote in the FAQs for the website, “We’re small. We’re scrappy. We aren’t going to change the world, but we aim to make a difference in our little corner of it.”

That was my pledge to the community I chose to serve and will continue serving. 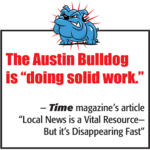 Thirty-eight years as a journalist, with a couple of national awards for investigative reporting and a Bulldog record of accomplishment behind me, I still believe this work can make a difference.

I will continue as long as I’m able. And I’m plenty able.

Each year I celebrate my new age by counting up the years and bicycling a mile for each. Two days ago, joined by many friends along the way, I rode the eighty miles.

The years add up. The miles go by. And I hold fast to the ideal that political candidates, officeholders and government officials should be held accountable. I will continue doing my best to make it so.

If you haven’t already done so this year, now’s a great time to become a supporter, because whatever you contribute by December 31st will be matched twice over during NewsMatch.

I greatly appreciate your support.

Make your contribution right now by clicking this button: