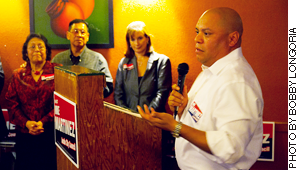 However, there is another side to Austin Martinez says people rarely talk about. The side where children go to sleep hungry, teenagers drop out of high school, and parents struggle to make ends meet on multiple minimum-wage jobs.

It’s this aspect of Austin that Martinez wants to focus on if elected to a third term to the Austin City Council, he said.

“We’re defined by our failures as much as our successes,” Martinez said. “It’s government’s job to do for those who cannot do for themselves.”

Martinez, 42, kicked off his re-election campaign at Nuevo Leon Restaurant on East Sixth Street Wednesday, saying more needs to be done to improve Austin’s east side.

Martinez did not mention his opponent, Laura Pressley, a business owner and member of Fluoride Free Austin, who announced Friday that she would challenge Martinez, the council’s only Latino, for the Place 2 spot.

Martinez said he moved to Austin in 1988 with $50 and a trumpet, hoping to make it as a musician. He eventually joined the Austin Fire Department, and worked at an East Austin fire station for 13 years. Martinez was elected president of the Austin Firefighters Association in 2003. In that position, he successfully fought to secure collective bargaining rights for firefighters, and a pay raise that made Austin firefighters among the highest paid in Texas.

Martinez was first elected to the City Council in 2006 on a platform of understanding the concerns of working-class minorities in East Austin. Martinez noted his efforts to ensure workers are paid on time and have rest breaks during the workday.

“This community has been historically underserved,” Martinez said of East Austin. “I am that champion.”

Martinez said, if elected to a third term, he would continue focusing on economic, transportation and equality issues. As chairman of the Capital Metro board, Martinez said he helped transform the agency over the past two years, noting the launch of the Red Line, a the Metrorail service that connects downtown Austin with the suburban areas including Wells Branch, Lakeline, and Leander.

He also plans to continue his support for Austin’s music community and work with musicians and neighborhood groups so that they coexist harmoniously.

Martinez alluded to his reputation as the council’s most outspoken member saying, “I don’t shy away from challenges. I take them head on. That’s my style.”

Gloria Aleman, an Austin resident and retired Travis County employee who was raised on the eastside, and Linda Ramirez, director of accounting at Rz Communications, were among those who came out to show their support for Martinez. (Andy Ramirez, CEO of Rz Communications, bundled campaign contributions for Martinez’s 2009 re-election campaign.)

“East Austin still has a lot to be done,” Aleman said. “His heart is in the right place, and I think he’s the only candidate who can make that happen. He cares about people.”

Opponent has Latino support, too

As reported by The Austin Bulldog January 21, some people have argued that Martinez has not done enough to represent East Austin and the Hispanic community.

Although their numbers pale in comparison to the size of the crowd at Nuevo Leon Wednesday, several Latino activists expressed their support for Pressley last Friday, and their frustration for, what they see as, Martinez’s inability to address important issues.

Marcelo Tafoya, a former District 12 director for the League of United Latin American Citizens, agreed, saying, “We decided a while back to get rid of ‘Evil Knievel.’ We decided that the gentlemen’s agreement is BS. It hasn’t served the minority community at all.”

Tafoya said the minority members of the council were “never elected by us, they never represented us, and never even considered us. They make token gestures, and the council votes against us. We’re sick and tired of it.”

Pressley criticized Martinez for being part of a council that has granted economic incentives to large companies and developers, saying that, “Growth should pay for itself.”

She also criticized his support for the construction of Water Treatment Plant 4, which was approved by a narrow 4-3 council majority despite protests from environmental activists.

So far, Martinez has garnered significantly more financial support than Pressley. He has raised $70,460 for his re-election bid and had $64,654 in the bank as of December 31, according to campaign finance reports released January 17.

Pressley raised $3,100 and had $2,332 in the bank through December 31. She has not yet hired a consultant or campaign manager. However, Pressley is confident she will raise more money in the coming months. She had been advised she needed to raise $200,000 to $250,000 for the campaign. “That’s what we’re going to do,” she said.

“I [had] a lot of donors waiting for us to declare against Martinez,” she said. “We could not do this without Hispanic support.”

Martinez concluded his speech at Nuevo Leon by singing to his wife, Lara Wendler, chief of staff for State Senator John Whitmire (D-Houston).