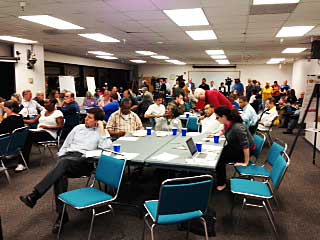 Any doubts about the public’s interest in establishing the 10 council districts to take effect in the November 2014 City Council elections were put to rest Tuesday night as some 120 people attended a jam-packed program at One Texas Center.

Proposition 3’s 10-1 plan for council elections was put on the November 6 ballot through a petition drive led by Austinites for Geographic Representation and approved by 145,910 votes (60.15 percent).

“We’re at the beginning of what for some is too long a process,” said Larry Schooler, a community engagement consultant in the city’s Public Information Office. “Tonight is the beginning of that process.”

“How do we attract applicants with the qualifications the charter amendment sets out: relevant analytical skills, ability to be impartial, and appreciation of the city of Austin’s diverse demographics and diversity?

“This is the beginning of a journey. It has many parts. This is the first of those parts, “Schooler said.

Jason Hadavi, chief of investigations in the city auditor’s office, provided a brief overview of the process that will be used to form the Citizens Independent Redistricting Commission (CIRC). The CIRC will draw council districts the City Council has no choice but to adopt, subject to federal approval under the Voting Rights Act.

The ARP, which will be composed of three independent auditors, will be responsible for selecting the 60 most qualified applicants.

City Auditor Ken Mory hosted last night’s event with the goal of brainstorming ways to drum up applications from qualified volunteers to serve on the CIRC.

After these brief introductory remarks, six groups seated together around tables—and another group seated in overflow space in a nearby break room—were turned loose to brainstorm through discussions. Each table was attended by two members of the auditor‘s staff, one to facilitate the discussion and one to record the group’s ideas on flip charts.

After an hour of noisy and energetic discussions the proceedings were halted to hear a brief report from a spokesperson for each group.

Given the need to evaluate the voluminous suggestions and devise an all-out marketing plan that will make most Austin citizens aware of the opportunity to serve on the CIRC, the auditor’s office aims to make the application forms available by January 31

How to measure applicant qualifications?

The overall theme that emerged from the seven discussion-group reports was inclusiveness.

Once an applicant has been deemed qualified by having been a registered voter for five years, having voted in three of the last five city elections, and having been found free of the conflicts of interest that would rule out participation on the CIRC, a strong consensus was voiced for making sure that not only pointy-headed intellectuals wind up on the Commission.

Life experiences should also be considered.

A concern was expressed that the minimum requirements for voter registration and voting history might screen out to many African Americans, given the shrinking population-share of black citizens. Those, however, are hard-and-fast restrictions that apply to all applicants, regardless of race.

Although CIRC applicants should be diverse in terms of race, ethnicity, gender, and sexual orientation, a diversity in skills and a mix of homeowners and renters might also be beneficial.

Outreach in Spanish was suggested, although it was not made clear how people limited to Spanish could participate in CIRC meetings conducted in English.

Prospective applicants should understand that while service on the CIRC will require considerable unpaid volunteer time, there will be reimbursement for out-of-pocket expenses such as child care and transportation to attend meetings. No one should decline to participate for lack of these basic needs.

Although the CIRC’s work will involve technical details such as drawing council districts to include demographics, legalities, and map-making, applicants should be put at ease by the fact that experts in these areas will be made available to advise the CIRC.

While not listed as a requirement in the Proposition 3: Ordinance No. 20120802-015, suggestions were made to consider such things as an ability to listen, cooperate, discuss business civilly, donate time to serve, and be a team player.

A suggestion was also made to include in application forms questions to ask if the applicant has been convicted of a criminal offense and to describe the applicant’s social activities and community involvement.

How to evaluate the required traits

Proposition 3 requires CIRC members to have analytical skill, be impartial, and have an appreciation for the city’s diverse demographics and geography. The Applicant Review Panel will be charged with screening applicants to identify those who meet these requirements

The group discussions brought forth the following ideas for possible use by the Applicant Review Panel in making these determinations:

• ability to use data as a tool

• ability to entertain all possibilities

• commitment to keep the process as open as possible

• oath to be impartial so as not to undermine the process

Marketing and outreach for CIRC applications

Group proposals for maximizing awareness of the opportunity to serve on the CIRC included the following ideas:

• Use mainstream, community, ethnic, and alternative outlets including print, social media, broadcast, and cable channels like the city’s Channel 6.

• Include the actual application forms in utility bill mailings and/or as inserts in publications.

• Make mass mailings to registered voters (perhaps limited to those who meet the qualification of being registered to vote for five years and who have voted in three of the last five city elections, a prerequisite).

• Hold town meetings in all parts of the city for face-to-face discussions where people live.

• Monitor applications as they come into the city auditor’s office to identify areas of the city, or zip codes, that are not submitting applications and target those areas for more intensive outreach.

“This is beyond my expectations,” Mory said of the evening’s turnout and participation, in wrapping up the meeting after an hour and 45 minutes. “Thanks for coming out tonight.

The target date for making the application forms available is January 31, Hadavi said.

Mory said the ideas on the flips charts were to be transcribed, distilled into common themes, and posted on the auditor’s website at http://www.austintexas.gov/10-one.

The evening’s program was filmed by Channel 6 and may now be viewed online. To see the edited 45-minute video, click here.

Related Bulldog coverage: This is The Austin Bulldog’s 43rd article covering issues and activities pertaining to proposed and/or voter-approved changes to the Austin City Charter.

City Hustles to Initiate Prop 3 Tasks: Auditor coordinating with proponents of the 10-1 plan to begin what will be a lengthy transition process, November 15, 2012