Push for CodeNEXT Election May 5

Corrected 11:15am Wednesday December 27, 2017 (to attribute statement to Michael Lavigne that was misattrubted to Chris Allen) 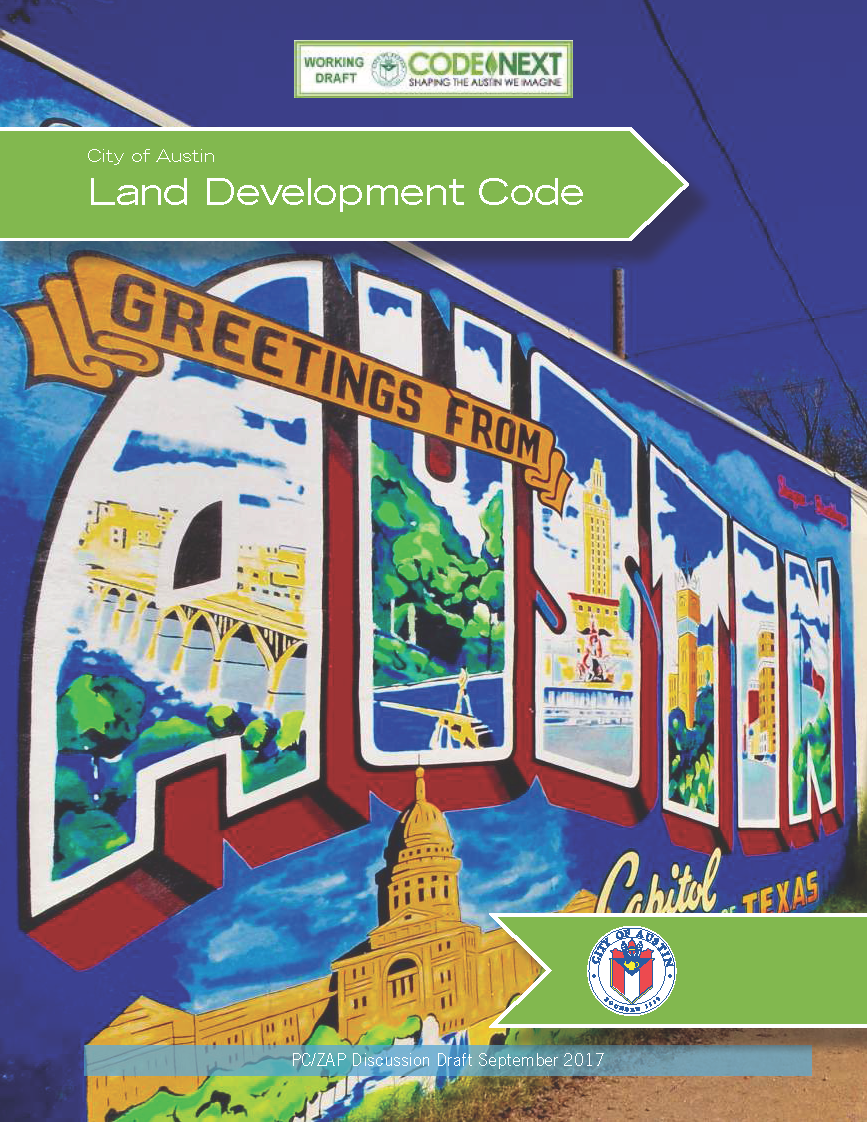 The Austin Bulldog reported IndyAustin’s launch of three petition drives September 12. Now organizers say they’re on track to file petitions with the Austin City Clerk in a few weeks to force an election on one of them: CodeNEXT, a complete overhaul of Austin’s Land Development Code that’s costing the City about $8.5 million.

The other two petitions, to restore the power of referendum and provide a new billboard ordinance, will be timed for the November 2018 election.

If the petition is successful in bringing about an election and voters approve its language, it would require both a waiting period and voter approval before CodeNEXT or any subsequent comprehensive revisions of the City’s land development laws become legally effective.

Requiring implementation of an ordinance to be delayed and then ratified by a later iteration of the City Council sets up an extraordinarily strenuous and unprecedented process. Petition proponents contend this extreme caution is justified by the far-reaching consequences for property owners who otherwise would be forced to accept sweeping changes enacted by a simple council majority vote. It should be noted that changes to development regulations typically affect only new projects.  CodeNEXT would undercut the vested rights held by every property owner.

Completing an initiative petition in three months is a blistering pace for rounding up the signatures of 20,000 registered city voters that must be verified by the City Clerk. In fact, it’s just half the 180-day window during which signatures may be added to petitions and counted as valid.

If the City Clerk certifies that the number of petition signatures are sufficient, then, per Article IV Section 4 of the City Charter, the City Council would have two choices: either (1) pass the initiated ordinance within 10 days after certification or (2) order an election and submit the ordinance without amendment to a public vote on the next uniform election date authorized by state law. The earliest uniform election date would be May 5.

Having an election on the petition hanging over their heads might dissuade City Council members from having a final vote on CodeNEXT in April, something at least one council member has already voiced concerns about.

May not the preferred date but maybe necessary

IndyAustin’s petition efforts are being led by Linda Curtis, who in recent decades has spearheaded numerous successful signature collection efforts. She led the Austinites for Geographic Representation petition campaign that triggered the November 6, 2012, City Charter election. That’s when percent of voters approved geographic representation for City Council elections. Elections held in November 2014 initiated an historic shift from an all at-large council and the newly elected officials from the 10 districts took office in January 2015.

Austin voters had previously defeated six propositions that would have required some form of geographic representation, the first time in 1973. The top-down, council-led propositions put before voters invariably floundered and failed. Two federal lawsuits attempting to override at-large elections also failed. Yet 41 years later this grassroots initiative succeeded in winning the popular vote.

Now another grassroots effort is challenging the judgment of the City’s governing body.

“We have said all along that we prefer a November election for all three petitions,” Curtis said, “but CodeNEXT has been pushed for a May election due to the mayor’s insistence that the City Council vote on it in April. This, surely, is the mayor’s own political deadline—not wanting to be running on the same ballot with the (petition initiative) in November.”

“We do not want a May election as it appears there will be nothing else on the ballot except this issue and it’s our understanding that this will cost the city $800,000.

“We’re hoping that Austinites will not only sign the petition but reach the mayor to ask him to slow down on CodeNEXT and join us in a call for a November vote.”

A small gathering of IndyAustin supporters attended a holiday party December 21 at The Frisco restaurant in North Austin.

Ed English is one of the IndyAustin enthusiasts who’s gathering petition signatures, something he gained experience doing with Austinites for Geographic Representation. He noted the significance of the petition drive being conducted during the reelection campaigns of Mayor Steve Adler and five council members: Ora Houston, Sabino “Pio” Renteria, Ann Kitchen, Ellen Troxclair, and Kathie Tovo.

He said IndyAustin petitioners have blanketed key locations daily, including the Armadillo Christmas Bazaar, farmers’ markets, Travis County offices on Airport Boulevard, and they will be at the annual Polar Bear Swim at Barton Springs on New Year’s Day. Petitioners also covered events hosted by the Austin Independent School District and each of the city’s CodeNEXT open houses.

Architect Chris Allen has rendered drawings of how proposed CodeNEXT changes would permit far greater density on lots that are current zoned for single-family dwellings. He represented Council District 10 on the Code Advisory Group whose work ended in July 2017.

Alluding to the possible impact on the mayoral and council elections slated for November 2018, Allen said, “CodeNEXT didn’t exist in the last election. The process is bad. The product is bad. That’s why there’s a rush. Who would want to run on it?”

“My job is not to make politicians comfortable,” Allen said. “They are at-will employees. Allen said he is a former member of Austin Neighborhoods Council executive committee and is active in Community Not Commodity.

Michael Lavigne is a political consultant and president of the Crestview Neighborhood Association. He said the CodeNEXT petition serves a couple of purposes, first that it’s important for citizens to be able to vote on it. Secondly and more important to him is that “council members know that people care about it.”

“My job is not to make politicians comfortable,” Lavigne said. “They are at-will employees. Lavigne said he is a former member of Austin Neighborhoods Council executive committee and is active in Community Not Commodity.

The petition “forces the council to give us something that will pass with a public vote. A 6-5 council vote is very different from a public vote. That fact alone tells you all you need to know about CodeNEXT,” Lavigne said.

Gina Allen, Chris Allen’s wife and business partner, said that, “As written, CodeNEXT will increase demolitions among the poorest, those on fixed incomes, because land values will increase drastically.”

She said their architectural firm mostly does residential remodeling projects, “to keep people in their homes affordably.”

Kata Carbone lives in the Allandale neighborhood and said the association’s December 2017 newsletter, the Allandale Neighbor, contains coverage. An article by Kevin Smith states, “For Allandale, the second draft of CodeNEXT could triple the amount of homes.” Underlining the neighborhood association’s position is that the newsletter contains a copy of the CodeNEXT petition that residents can complete and mail to IndyAustin.

Carbone said when Allandale held a CodeNEXT meeting, “the room was packed. They booed the mayor during the October meeting.”

“CodeNEXT for advocates for Accessory Dwelling Units everywhere, which does away with single-family homes,” Carbone said. “That’s why Allandale has been so against densification.”

While Linda Curtis sparkplugged the petition that got geographic representation on the ballot and got it passed, and she is leading the CodeNEXT and other petition drives, there are a couple of key differences in the two efforts.

Austinites for Geographic Representation kicked off with its first public meeting at Huston-Tillotson University February 26, 2011, to discuss forming a coalition. The group didn’t file petitions with the City Clerk until June 28, 2012, some 16 months after that first meeting. In the meantime they gathered petition signatures all over the city and formed a coalition of some 30 organizations from across the political spectrum. That strong coalition was a key factor not only in passing the 10-1 plan but also in besting the alternative 8-2-1 plan the City Council placed on the ballot at the last minute and was pushed hard by then Mayor Lee Leffingwell.

This time around, IndyAustin widely disseminated petitions via its website and that of Community Not Commodity, allowing immediate access via the Internet for people to download, sign, and mail. Hence the result that petition pushers are gathering signatures about five times faster.

But the rush also leaves far less time to build a broad coalition that will campaign and vote for the CodeNEXT petition if it gets on the ballot.

“I think we will have a natural coalition to support the petition election,” she said, adding, “I think we’ll be outspent 10-1.”

About the reporter: Ken Martin has been covering local government and politics in the Austin area since 1981. See more on Ken on the About page. Email [email protected].

This report was made possible by contributions to The Austin Bulldog, which operates as a 5(c)(3) nonprofit for investigative reporting in the public interest. You can help support this independent coverage by making a tax-deductible contribution. Contributions made by December 31 will be tripled through the generous support of matching donors.

Who funds the Bulldog? An alphabetic list of donors and the cumulative amount each person has given since 2009 are listed on the Contribute page.