Rematch election date not yet determined 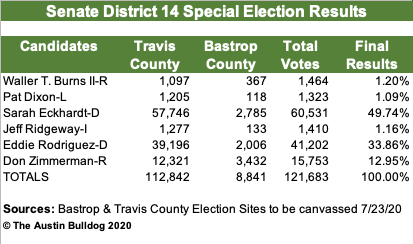 When the final special election results were in for both Travis and Bastrop counties, former Travis County Judge Sarah Eckhardt inched ahead of State Representative Eddie Rodriguez by another 446 votes. That brought her final results to 49.74 percent—still not enough to claim an outright win for the Senate District 14 seat vacated by Kirk Watson.

A total of 1,264 votes were added to election night results for the two counties as mail ballots were tallied.

In final results, Rodriguez finished behind Eckhardt by nearly 16 points.

Filling Watson’s senate seat would not have required a runoff between the two Democrats had it not been for the last-minute entry of former Austin City Council Member Don Zimmerman. The Republican jumped into the senate race after losing out on a state representative runoff by a single vote. Overall, Zimmerman got nearly 13 percent of the votes. He won in Bastrop County with nearly 39 percent of the votes.

Dropping out of runoff an option

Ronney Reynolds did it first in Austin’s mayoral election of 1997. Then Beverly Griffith did it in 2002 when she sought reelection. And Chris Riley did it in the 2014 in the election that established geographic districts.

All three were incumbent council members who lagged behind in Austin’s general elections. As second-place finishers they qualified to be in a runoff.

All three instead folded their campaigns.

Would Rodriguez take a graceful exit and bow out of the runoff?

Nope. Not going to happen.

“We are proud of the campaign we ran in the special election and look forward to a spirited fight in the runoff,” said Nick Meier, Rodriguez’s campaign manager.

The Austin Bulldog’s analysis of voting results indicates that Rodriguez faces long odds to beat Eckhardt in the runoff. 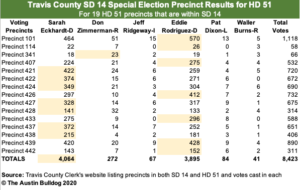 For one thing, the analysis shows that Eckhardt carried seven of the 15 voting precincts located within Rodriguez’s House District 14. He carried the same number of boxes but overall Eckhardt won more votes, 4,064 to 3,895. (See accompanying chart in which the biggest vote getters in each precinct and total votes are highlighted.)

The fact that Eckhardt got more votes in a house district that Rodriquez has represented for 19 years seems daunting. But his campaign manager, Meier, said. “Eckhardt (as county judge) represented 94 percent of the senate district and only got 49 percent of the votes.”

“We projected high turnout,” Meier said, but the actual turnout of more than 121,000 exceeded expectations. “It became name ID contest.”

Which clearly favored Eckhardt, who until recently presided over the highly visible Travis County Commissioners Court for nearly six years, until she resigned to run for the senate. In addition, she took the lead with Austin’s Mayor Steve Adler in responding to the pandemic.

County Clerk Dana DeBeauvoir told The Austin Bulldog this morning that the Travis County Commissioners Court will canvass the election results at its meeting this afternoon. Then she will forward results to the Texas Secretary of State where they will be merged with Bastrop County results and ultimately go to Governor Greg Abbott. Once the governor approves the runoff date can be set.

In his first bid for public office in 2002, Rodriguez had a tough time getting elected as state representative in District 51, which encompasses east and southeast Travis County.

Rodriguez placed a distant second to Flores in the general election, where she led 38 percent to his 23 percent.

In the runoff, DeLeon and neighborhood organization El Concilio endorsed Flores, The Austin Chronicle reported. Guzman and environmental organizations endorsed Rodriguez, who went on to win the runoff with 52 percent of the 4,680 votes cast.

In years since, Rodriguez went unchallenged in the Democratic Primaries until 2020, which he won with nearly 80 percent of the votes. In previous years he easily dispatched a variety of third-party candidates in the November general elections.

Now he’s trying to move from House to Senate and serve out Watson’s unexpired term through 2022. And for the first time he faces a veteran elected opponent.

In terms of percentages, Rodriguez being down by nearly 16 percent doesn’t sound insurmountable. After all, he was down 15 percent and came back to beat Flores in 2002.

Still, his campaign tries to put a good face on a bad situation. The day after the March 14 special election, Rodriguez issued a statement ending with this:

“Today is a day for us to celebrate, and then the hard work begins anew tomorrow. I owe a great debt of gratitude to all of my supporters, but more importantly to my wife Christine and my family. I would also like to thank my incredible campaign team who put in untold hours of hard work in the most difficult and stressful conditions to pull off the best campaign Texas has seen in decades.”

But the “best campaign” in decades came up considerably short.

The fact that he outspent Eckhardt by more than three-to-one in the special election—and dumped an incredible $405,000 into media buys leading up the election—indicates he has a serious problem.

Given that Rodriguez can easily retreat to his District 51 seat and enjoy the seniority of nearly 20 years in the House, one must wonder why he doesn’t just throw in the towel and forego the pain and expense of a runoff.

“We’re in it to win,” said Rodriguez’s campaign manager Nick Meier. “Eddie won’t back down.”

From his perspective, just getting into the runoff was a big achievement. “We are proud of the campaign we ran in the special election and look forward to a spirited fight in the runoff,” Meier said.

Meier said that he expects Rodriguez will have a resource advantage in the SD 14 runoff, just as he did in the special election.

Both campaigns are catching their breath before going hot and heavy into the runoff, which won’t occur before September and could be delayed until early October.

Eckhardt is pushing ahead.

“I am raising money, gathering endorsements, and my team is ready for a runoff,” she said in a text message. “And, at the same time, I’ll keep working on the challenges we face that aren’t standing still while we resolve this political contest.”

Asked to clarify what was meant by challenges, Eckhardt said, “COVID cases are climbing. Trump has deployed federal troops to American cities to suppress political speech. And our number of triple-digit days are increasing due to climate change. These are some of the challenges we face. I will do my best to gather talent and attention to address them while also attending to the runoff.”

Audio version of this story read by Editor Ken Martin

Ken Martin has been covering local government, elections, and politics since 1981. See more about Ken on the About page.