The power and fundraising ability of incumbents prove to be insurmountable

The 28 candidates who ran for mayor and City Council seats last year collectively raised almost $2 million in campaign contributions for the 2018 elections. Nearly $62,000 was distributed in equal shares to four candidates from the Fair Campaign Fund, pushing the total close to $2.1 million.

The candidates pretty much spent all of it, according to The Austin Bulldog’s detailed analysis of all 100-plus campaign finance reports filed with the City Clerk in six reporting cycles, from January 15, 2018 through January 15, 2019. (For those who want to see where all these numbers came from, dive into the Excel spreadsheet titled Campaign finance analysis for the 2018 election of the mayor and five council members, which is also linked at the bottom of this story.)

Nearly 46 percent of that total was contributed to the seven candidates running for mayor. The five mayoral also-rans who did not make the runoff collectively raised less than $12,000 and one of them, Gustavo “Gus” Pena, didn’t bother to file a single campaign finance report.

Mayor Steve Adler alone raised more than $784,000. That amounted to nearly four of every 10 dollars raised by all candidates combined—not just mayoral candidates.

For his 2018 reelection bid Adler didn’t take a dime out of his own deep pockets. That was a sharp contrast to his first mayoral campaign in 2014, where he poured $449,200 of his own money into the race.

Given Adler’s prodigious fundraising in the 2018 cycle and ease in besting his runoff opponent, he could have spent less on the campaign and siphoned off some of that money and put it back in his personal back account. Instead he let that debt ride throughout this campaign, spent nearly every dollar on his campaign, and had less than $6,300 left to carry over into his officeholder account.

Adler’s tally was five and a half times the $141,000 his runoff opponent, Laura Morrison, raised from individual contributions.

Morrison, a former two-term council member, also anted up $48,000 of her own money but still suffered a drubbing for the record books. She lost her bid to unseat Adler by 40 points. He pulled 59 percent of votes cast in the November 6, 2018, election while Morrison barely cracked 19 percent—just eight points higher than third-place Pena.

That’s an even bigger margin of victory than the 33-point advantage Adler achieved in 2014, when as a first-time candidate for mayor, he beat three-term Council Member Mike Martinez 67-33 percent.

District 3 incumbent Sabino “Pio” Renteria was the only candidate besides Adler to crack the $200,000 mark in fundraising, with nearly $205,000.

The end result was Renteria spent more than eight times the $24,000 spent by his sister and runoff opponent, Susana Almanza, to beat her once again. (Both Renteria and Almanza got $15,490 from the Fair Campaign Fund.)

Renteria benefitted greatly from the backing of mega-fundraiser Eugene Sepulveda, who—at the mayor’s behest—emailed Adler’s supporters and encouraged them to pour money into his wingman’s campaign coffers.

This time Renteria enjoyed a 30-point margin of victory, capturing 65 percent of the runoff votes. That was an even wider margin that the 20-point spread he won by in the 2014 election runoff against Almanza.

Caveat: Almanza was one of nine candidates who failed to file the campaign finance report due January 15, 2019. Her December 3, 2018, report, stated she had nearly $12,000 left in cash on hand. She may have raised and spent more in the closing days leading up to the December 11 runoff.

She did not respond to The Austin Bulldog’s email or phone message about the missing report.

The mayoral and District 3 races were not unique in having the most heavily funded candidates winning by huge margins. Adding a wrinkle in District 1, however, was the candidate who spent the most didn’t even make the runoff.

The District 1 runoff pitted Mariana Salazar against Natasha Harper-Madison. Going into the runoff they appeared to be evenly matched based on the neck-and-neck results of the November 6 general election, in which Salazar edged Harper-Madison 26-25 percent.

A key concern in this runoff was whether the City Council would continue to have African-American representation. Since 1971, when Berl Handcox cracked the color barrier by getting 62 percent of the votes in a runoff against Harry Smith, the council has never had less than one (or more than one) African American on the dais.

The Latina’s narrow lead in the general election was all the more remarkable because she had raised just $17,000 while Harper-Madison, an African American brought in nearly twice as much.

An even bigger shocker in the District 1 general election contest, however, was that Vincent Harding—also an African American and the immediate past chairman of the Travis County Democratic Party—got 23 percent of the December 11 votes. That despite Harding having spent more than six times what Salazar did.

Harding had the money. He had powerful connections. Yet the mainstream party’s endorsed candidate was frozen out of what had initially looked like a safe bet to win the council seat being vacated by Ora Houston, who won in 2014 and chose not to seek reelection.

Salazar overcame big odds to come out on top in the general election by relying heavily on a grass-roots, door-knocking, shoe-leather campaign. That tactic proved to be no match for what Harper-Madison unleashed in the runoff by bumping her total campaign funding to more than $91,000 (including $15,490 from the Fair Campaign Fund).

Salazar, who missed out on getting a cut from the Fair Campaign Fund, managed to end up raising a bit more than $38,000 for the whole campaign.

Harper-Madison netted nearly 72 percent of the votes cast in the runoff to achieve a 44 point margin of victory, bigger even than Adler’s win over Morrison.

And she did it in a city in which demographics for 2017, according to American Community Survey information supplied by City Demographer Ryan Robinson, showed that Hispanic population exceeded 34 percent of the total while African-American population was just more than 7 percent.

Like Salazar in District 1, District 8 candidate Paige Ellis ran a shoestring campaign into the November 6 general election yet managed to come out ahead.

Her runoff opponent Frank Ward spent more than $45,000 going into the general election.

The other two candidates in the District 8 general election also far outspent Ellis.

Yet Ellis grabbed 31 percent to Ward’s 25 percent of the votes cast December 11, while Levinski managed 23 percent and DePalma 22 percent.

Once Ellis made the runoff, however, she got $15,490 from the Fair Campaign Fund. With that and strong fundraising during the runoff, she ended up spending nearly $107,000 to Ward’s $100,000 for the entire campaign.

With that money, and endorsements from fellow Democrats DePalma and Levinski, Ellis went on to defeat Republican Ward 56-44 percent.

The Austin Bulldog on December 4 reported that Ward had failed to file his personal financial statement, possibly a Class B misdemeanor offense. He then filed the report December 6, more than three months overdue and just five days before the December 11 runoff election.

District 9 also drew four candidates but only two had the money to be competitive.

Tovo won her second term by beating fellow Council Member Chris Riley in the 2014 election that offered voters their first chance to elect council members from geographic districts. Tovo and Riley just happened to wind up in the same district when the lines were drawn to implement a historic changeover from an at-large council.

Skidmore used none of her own money and wound up spending nearly $110,000 for her entire campaign.

Still—the same as Mayor Adler—Tovo’s 2018 spending was just half what victory cost in 2014. She spent nearly $238,000 to beat Riley. Which points to a political truism: incumbents typically enjoy a built-in advantage that’s difficult for challengers to overcome.

To get on the ballot again in 2018, Tovo took advantage of the City Charter provision that allows a term-limited incumbent to petition for signatures to qualify. On election night November 6 Tovo told The Austin Bulldog she had needed about 1,800 signatures and approximately 4,750 of the 5,000 signatures that she and volunteers rounded up were deemed valid.

Those signatures offered Tovo an advantage because they provided contact information for voters inclined to give her a chance, even if they weren’t committed to marking her place on the ballot.

District 5 a sure thing

Nathan Alexander White appeared alongside Kitchen at the August 19, 2018, candidate forum hosted by the Workers Defense Action Fund. But a day later the City Clerk ruled that White had submitted insufficient signatures to qualify for a place on the ballot.

That left Kitchen unopposed, a rare situation in council contests. In recent memory the only other candidate to achieve that status was Bill Spelman, whose first term ended in 2000. When he sought office again in 2009 he ran unopposed, then drew a half-dozen opponents in 2012.

She ended up spending less than $17,000 for the entire campaign. 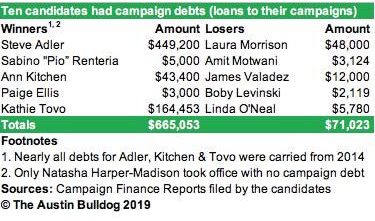 Ten candidates finished the 2018 elections with debts, not to lending institutions but to themselves for money they poured into their campaigns. (See chart.)

Eighty-nine percent of that amount, more than $654,000, was old debt that Adler, Kitchen and Tovo carried over from their 2014 campaigns.

Five losing candidates lent a bit more than $71,000 to their campaigns which they are permitted to repay from future contributions.

Links: Campaign finance analysis for the 2018 election of the mayor and five council members

An alphabetic list of donors who have contributed to The Austin Bulldog since the organization was formed in 2009 and the cumulative amount each person has given through September 25, 2018, are listed on the Contribute page.