The wave of criminal justice reforms sweeping the country since billionaire George Soros began pumping millions into district attorney elections was manifested last night in the massive win racked up by José Garza.

Early on he had a lead of 30,000 votes, causing incumbent District Attorney Margaret Moore to concede soon after those results were posted on the Travis County Clerk’s website.

Eiserloh sent an email conceding the race to Delia Garza just after 11:30pm. By then Garza was still ahead by more than 10,000 votes.

“I congratulate Delia Garza on her victory in the Travis County Attorney’s race. I wish her all the best in serving in this important County Office,” Eiserloh’s email stated.

“I also extend my sincere gratitude to the Travis County community for their support and engagement during the campaign. It has been a great honor to work with so many amazing people and create a shared vision for Travis County. Although these may be difficult times for so many in our community, I have great faith that we will get through these times and emerge even stronger.

“I greatly appreciate everyone who gave so much time, talent and support to my campaign. Many thanks to my campaign team, volunteers and supporters. It has been one of the greatest honors of my life to work with you all. And heartfelt thanks to my family for being a constant source of support. Although I am disappointed with the results, please know that I will continue to work in our community to make it a better place for all.”

Garza’s win came despite Eiserloh outspending her by more than $168,000.

“We did it Travis county! I’m proud of the campaign we ran and I’m grateful to all who believed in our message of bringing real change and meaningful criminal justice reform to our community. We knew this would be an uphill battle and we faced many obstacles, but this was worth every step in the process.

“I’ve heard the voters, and with community collaboration and support, I will address criminal justice reform in Travis County in a way that will have a lasting impact. Our community and our country are hungry for much overdue reforms and social justice transformations that I believe we can make a reality.

“I am proud of my service to this community as an Austin Firefighter and the first Latina City Council Member and Mayor Pro Tem, and I am so grateful to continue my journey in public service as your next County Attorney after our election in November.

“Thank you for placing your confidence in me. Whether you voted for me or not, I plan to represent our whole community in our collective journey to ensure all residents in Travis County feel safe, heard, and represented.” 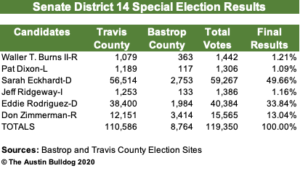 Former County Judge Sarah Eckhardt figuratively came within an inch of winning the senate seat. She netted 49.66 percent of the combined Travis and Bastrop County votes. Her total vote count was 59,267.

That was not enough to avoid a runoff with State Representative Eddie Rodriguez. He was a distant second with 33.84 percent of the two-county votes.  He tallied 40,384 votes.

That there would be a runoff was almost certain, given the crowded field included four other candidates.

This is in effect a huge setback for Rodriguez. In terms of funding he outraised Eckhardt by three to one. He raked in more than $746,000 to Eckhardt’s $228,000.

But Eckhardt results showed that money isn’t everything.

Updated at 4:32pm July 15, 2020, to update the distinction between Delia Garza’s City Council salary and what she will make as county attorney.

Audio version of this story read by Editor Ken Martin

Trust indicators: Ken Martin has been covering local government, elections, and politics since 1981. See more about Ken on the About page.