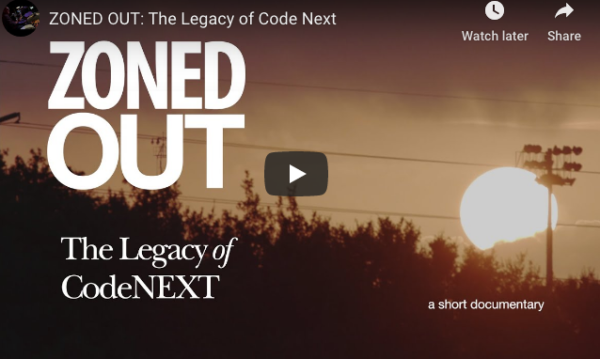 Some 140 people spilled into the Austin Film Society Cinema on Labor Day to see a documentary film just-released on YouTube that focuses on a new and problematic land development code for Austin.

Zoned Out is the latest in a long line of shorts and documentaries by the nationally known director Steve Mims, who lives in Austin’s Rosedale neighborhood and has been winning awards in film festivals and other venues for 30 years. He lectures at the University of Texas at Austin’s school of radio, television and film.

Zoned Out: The Legacy of CodeNEXT clocks in under 29 minutes. It’s short, it’s succinct, and it packs a clear message: If you care about preserving the rights of Austin’s single-family homeowners you need to get involved—quickly—because the new code may be unveiled as early as next month and could be voted on by the City Council before the year’s out.

Zoned Out supporters ask for viewers to share the film, available free on YouTube, in viewing parties with friends and neighbors.

The documentary starts with a few introductory statements containing basic information about CodeNEXT. The most controversial issue is “upzoning” designed to compel replacement of many single-family homes with a minimum of four units.

“Tens of thousands of homes near major roads, in ‘transition zones,’ are destined to be upzoned in a new rewrite of the city’s land rules. It’s a profound and potentially historic experiment in reshaping a city by zoning.”

The effect will create massive numbers of winners and losers, influence the makeup of the population, and ripple down through the land and the people of Austin, Texas, for years to come, the film states.

The City of Austin spent $8.5 million trying to bring about adoption of CodeNEXT only to have the City Council vote to kill it due to the overwhelming resistance that was clearly building against it.

The resistance included a petition drive that put Proposition J on the November 6, 2018, ballot. Prop J would have required a waiting period and subsequent voter approval before comprehensive revisions of the City’s land development code could be implemented.

Prop J was defeated 48 percent in favor and 52 percent against. But merely forcing the vote sent a strong message that people would not fade away when CodeNEXT, or whatever it would be renamed, resurfaced.

Zoned Out is a clear expression of continued resistance to overturning the rights of existing homeowners, people for whom, by and large, home ownership is their single biggest investment and one of few ways in which they can build wealth.

Homeowners want to keep their rights

The film includes interviews with numerous homeowners who voice deep concerns about the expected impacts of doing away with single-family zoning so homes can be removed and replaced with multiple units. All with the goal of increasing density in hopes of bringing about affordability.

The featured homeowners, who live in neighborhoods throughout Austin, all agreed that increasing density will not bring affordability and instead the real, underlying and undisclosed goal is to increase profitability for real estate investors.

Carmen Llanes Pulido, a recently appointed member of the city’s Planning Commission and one of those interviewed in the film, said she had wondered how the city could have wasted $8.5 million on the CodeNEXT process. Then someone told her, “It’s $30 billion in development we’re talking about.”

“There are stakeholders who would gladly see millions spent on this to unlock billions in profits,” Pulido said.

Seth Fowler, a resident of University Hills area in East Austin since 1976, said, “I love Austin. I’ve been here for 46 years. I may have to move to a place I don’t want. It’s devastating.”

“A home is the way wealth is passed down to generations,” Fowler added. “If we can no longer pay the taxes, the wealth we created will pass to someone else and our kids will have nothing. That’s not right.”

Allan McMurtry said of the code rewrite, “It’s not an enticement for affordability. It’s a mandate for profits.”

Cherrywood resident Justin Irving said his neighborhood established around 1949 is “duplex nation” with units of about 850 square feet. But it’s an area where demolition permits are escalating.

“Affordability is a social problem and you can’t rely on the market to provide that,” Irving said. “Making the land beneath us more valuable is not going to ameliorate that.”

Barbara McArthur said, “Upzoning is the tool to turn over a city from one class of people to another…It’s a gift and the gift is coming out of the pockets of the people who live here now.”

The film makes the point that a major factor in the shortage of affordable housing is that real estate investors are gobbling up for-sale homes at an alarming rate. It shows the cover photo of a New York Times article of June 20, 2019, “Want a home like this? Prepare for a bidding war with investors.” Though not actually quoted in the film, the article pinpoints a major cause of escalating home prices.

“For decades, single-family homes were an investment primarily for people who wanted to live in them,” the article states. “That changed with the Great Recession and its aftermath, when investors bought at least two million homes, and almost certainly far more than that, with prices depressed.”

“In the most frenzied markets, investors bought close to half of the most affordable homes sold last year and as much as a quarter of all single-family homes,” the article states.

After the screening a panel including Mims, Irving, McArthur, and Pulido took the stage.

McArthur said she’s lived in her neighborhood for 38 years, a mixed-income, racially diverse area where houses torn down were not replaced with affordable housing.

Pulido said, “We’re being told we’re anti-development, but we’re not. We are against rubbing everyone out.”

Irving said, “We know we have to make changes in the future for lots of reasons but who has to pay for the changes? You’re being asked to share that burden so someone can make more money.”

He reminded the audience, “CodeNEXT was defeated because you participated.”

Barbara Rush, chief of staff to Commissioner Shea, said, “East Austin is being torn down and families run out.”

An audience member who was not identified asked if there was a legal option to sue should the new code be implemented.

The question was fielded by attorney Fred Lewis, the founder of Community Not Commodity who pushed to get Proposition J on the ballot last November. Along with co-counsel Bill Bunch of the Save Our Springs Alliance, Lewis won a court decision to put it on the ballot even after the City Council­—despite the petition being ruled sufficient—voted not to do so.

To answer the audience question, Lewis said. “The first option is not to sue. We have to wait and see what they do. They (city council members) are so arrogant they don’t listen to people so there will be mistakes. I expect there will be some lawsuits.”

Steve Speir, a Democratic Party precinct chair, stood to say that getting people to watch the film online is not enough. He said that precinct chairs are being pressured by Mayor Steve Adler to support the rewrite.

Irving said, “We are up against a very large, deep-pocketed set of organizations. We have a limited time to change the scenario. This will be in your face before you know it.”

Pulido said the Planning Commission was encountering “big friction” with city staff pushing the timeline for the new code.

Lewis said the City Council believes that people support the new code but if it’s implemented, “Your life will never be the same.”

He urged people to “get out and make sure your neighbors know about the film.” He urged the audience to support the fundraising campaign to promote the film and pay the people who made it.

If you would like to help defray the cost of Zoned Out you can chip in on the fundraising page which has a goal of raise $25,000.

PACs to battle over propositions, October 1, 2018

You can help support this independent coverage by making a tax-deductible contribution.

Who funds this work? This report was made possible by contributions to The Austin Bulldog, which operates as a 501(c)(3) nonprofit for investigative reporting in the public interest.