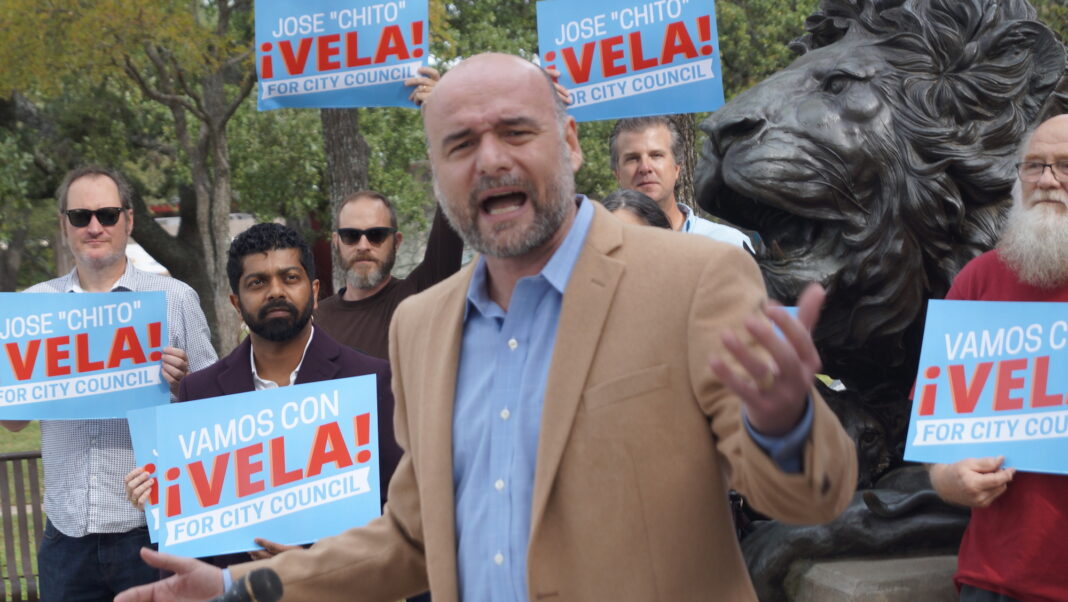 This story was updated at 4:35 pm, December 30th to reflect corrected fundraising totals for Monica Guzmán.

Jose “Chito” Vela, an immigration lawyer, has taken a big lead in fundraising in the January 25th special election for the District 4 council seat being vacated by Greg Casar.

As council races go, that haul is more than some incumbents raised in recent years, though less than the contenders in the hottest races last year. It gives Vela ample resources to build name recognition and get his message out heading into the early voting period that starts January 10th.

Because the D4 election is the only race on the ballot, turnout could be limited by low awareness and voter apathy. Vela said in a press release, “Our campaign has had a strong start, but we have to keep up the momentum. We have to make sure District 4 voters are aware of this special election.”

Adding to Vela’s advantage, the Austin Firefighters PAC spent $1,563 to print yard signs for the candidate, according to a filing Wednesday. The PAC has a campaign chest of $528,000 should it wish to do more.

Needless to say, a lead in fundraising doesn’t guarantee that Vela will win. Two major upsets in 2020 attest to that. But Vela is the frontrunner by other measures too, including endorsements from current office holders, union support, and social media following.

Vela has also demonstrated past success as a candidate, placing first in a six-way Democratic primary for state legislature in 2018, even besting then-Council Member and Mayor Pro Tem Sheryl Cole, before losing to her in a runoff by just 173 votes.

Still, Vela faces a large and diverse field of six other candidates, making it difficult to win an outright majority at the polls. A runoff, if necessary, is tentatively scheduled for March 22nd, according to city spokesperson Andy Tate. That would give an opponent another two months to play catch-up.

Like the outgoing incumbent, Greg Casar, Vela is a progressive Democrat. His opponents vary in views from progressive to moderate to conservative, with clashing views on public safety, land use, and other issues.

The Bulldog will cover the candidates’ political views and backgrounds more extensively in forthcoming articles.

Donations from lawyers and builders

Vela kicked off his campaign November 9 and received donations from 256 individuals within six weeks, at an average contribution of $156.

Another dozen or so top contributors work in real estate, development, or construction.

Several politicians and their staff gave to the Vela campaign, including Mayor Steve Adler ($400); his former deputy campaign manager Laura Hernandez, who also ran the No Way on Prop A campaign ($400); Michael Siegal, a former Congressional candidate and political director of Ground Game Texas ($150); and David Weinberg, a political consultant ($400).

Entrepreneur Andrew Allison, a political ally of Adler and financier of the strong mayor proposition in May, donated $400.

Solomon Ortiz Jr., a former state representative whom Vela used to work for, donated $400, as did Carlos Zaffirini, Jr, who is the son of long-time state Senator Judith Zaffirini (D-Laredo). Attorney Pooja Sethi, a former District 10 council candidate who is now chief of staff to Rep. Vikki Goodwin (D-Austin), donated $204.21.

Vela also received numerous smaller donations from Austinites of all walks of life, from retirees to civil servants. “I’m humbled by donations from over 250 people and the support of so many more,” he said.

Taking second place in D4 fundraising, Amanda Rios raised $10,132 in cash plus $947 in kind. Rios is a former teacher and mother of two children. She’s running principally on a public safety platform.

Rios garnered support from about 75 donors. Her list of supporters overlaps somewhat with the donor network of Save Austin Now, the group that waged campaigns for a camping ban and increased police staffing.

Among the 14 donors who gave Rios the maximum of $400, at least four had donated to Save Austin Now: Michael Carral, David Marquardt, Berenice Lara, and Cleo Petricek, the co-founder of Save Austin Now.

Matt Mackowiak, the other co-founder and chairman of the Travis County Republican Party, made a $150 in-kind donation to build Rios a website.

Monica A. Guzmán, a progressive who differs with Vela on land use issues, raised $3,774 through December 16. She reported an additional 15 donations after that totaling $1,279, but those occurred after the end date of the reporting period used by the other candidates. Guzmán loaned her campaign $100, and spent about $850. She spent most of that on filing fees, payment processing fees, and other administrative expenses.

Jade Lovera, who jumped into the race after a bad experience with a zoning decision near her home, raised $1,765. Lovera is the single mother of a 12-year-old son and a 6-year-old daughter and the chief strategy officer of Women Who Werk, a nonprofit.

Melinda Shiera, also a mother of two and a freelance marketing analyst, raised $359 and spent $451, including $250 for Facebook ads. Schiera describes herself as a moderate Democrat and is running on her record as a neighborhood association leader. She identifies housing density and public safety as priorities.

Isa Boonto, an AISD art teacher who is concerned about issues of affordability and wages, was the last to enter the D4 race. She filed a treasurer appointment December 15, just a day before the reporting period ended for the city’s first required campaign finance filing.

Boonto didn’t raise any funds by that date, but in subsequent social media posts she said she received her first donations, including one from Nelson Linder, the head of NAACP Austin. She spent $500 for the ballot application and gave $100 as a gift to a “former campaign manager.”

Voters will get an opportunity to know the candidates better at a virtual forum hosted by the sponsored by the City’s Ethics Review Commission and moderated by the League of Women Voters Austin Area.

Another forum hosted by neighborhood associations and civic groups will take place January 10th at 5:30 pm at the North Austin YMCA on Rundberg Lane. It will be open to the public and broadcast on Facebook Live. Sun Radio’s Chris Mosser will moderate.

Stay tuned also for more coverage from the Bulldog.