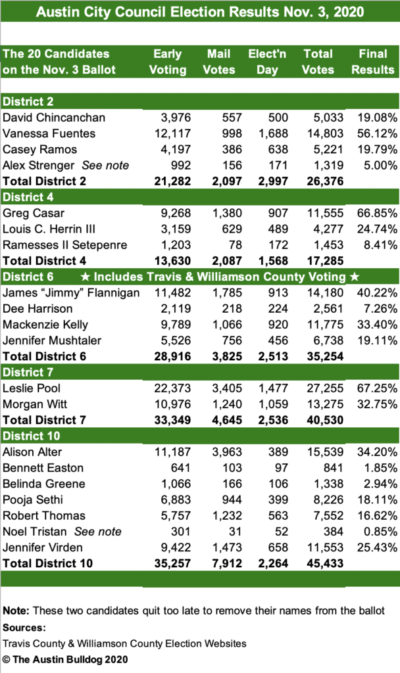 The big surprise of the election night came in City Council District 2, where Vanessa Fuentes, a former legislative aide, pulled off a decisive win over David Chincanchan, a council aide.

Chincanchan’s loss came despite outspending Fuentes by more than $36,000 and garnering endorsements from numerous unions and many elected Democrats.

Fuentes took 56.12 percent of the votes to Chincanchan’s 19.08 percent and Casey Ramos’ 19.79 percent. Crucially, her win may shift the balance of power on the council on land use issues, depending on the outcome of runoffs in Districts 6 and 10. Fuentes opposes the new land code revision, at least in its current form, in contrast to the outgoing incumbent, Delia Garza, who staunchly supported the new code.

Fuentes and Ramos, the two candidates who opposed the land revision, together took 75.91 percent of the votes compared to 19.08 percent for the pro-density candidate, Chincanchan, suggesting that District 2 voters strongly repudiate the new code—though other factors, of course, were at play as well.

After early voting results came out, stunned Chincanchan supporters gathered virtually to discuss the result, which showed him in third place, with Vanessa Fuentes winning a majority and even underfunded Ramos ahead of him by 221 votes.

“For the life of me I don’t get why the candidate who’s winning…is in the lead. But whatever,” said Yvonne Flores, president of the union AFSCME Local 1624.

“Keep your head up guys,” said Precinct 4 Constable George Morales. “We ran a great race. The numbers aren’t there. My hat’s off to everyone here that went out there and fought for David. And I’m so proud of him. I’m proud that he put himself in the fray.”

District 3 Council Member Sabino “Pio” Renteria, who employed Chincanchan as his chief of staff, said, “There’s a remote possibility that we could be in a runoff. If not, David is not going nowhere.” He referred to the political career of John Treviño Jr., who lost his first council bid in 1973 before making a second attempt and winning in 1975 to become the first Hispanic on the council.

Renteria added with a chuckle, “If I have to, I’ll hire him back in my office.” His wife Lori Renteria shouted from off-camera, “You are hiring him back!”

Chincanchan himself gave a speech that focused on thanking his volunteers, family, and supporters. “The fight is not over. The fight is beginning…A lot of people mentioned that I’m not going away. And that’s right, we’ll move forward. Today feels like an ending but it’s not.”

In the meantime, Casey Ramos was also coming to terms with the early voting numbers. He told the Bulldog by phone, “I’m kind of surprised about the early voting. It just seems off. I felt like we did pretty good, I thought we had a pretty good campaign.”

Ramos questioned whether media coverage “didn’t do us justice,” which might have hurt his chances. Ramos was the only candidate not to be endorsed by a major newspaper. The Statesman endorsed Fuentes while the Chronicle endorsed Chincanchan.

Ramos concluded saying that his campaign had been “for the people, not the developers.”

For her part, the victor said in a speech over Facebook live that her campaign had been a “long shot” but the outcome showed how hard her team had worked. Fuentes said, “I have the most individual donors from District 2, and that’s because we’ve been working this community.”

“I personally have made thousands of phone calls.”

Fuentes also gave a “shout out” to the outgoing incumbent, Delia Garza, saying she had “paved the way for Latinas to run for office, who has broken barriers, and broken that glass ceiling for us here in Austin…I’m really proud we’ll be able to keep a Latina perspective on the Austin City Council.”

Setepenre, who ran because of a personal grievance against Greg Casar, garnered 1,453 votes for 8.41 percent despite not spending any money at all.

Herrin, the conservative in the race, made public safety and the city’s homelessness policies his top campaign issues. The Bulldog caught up with him at a polling station on election day, where Herrin was out meeting voters. He said that D4 suffers from some of the worst crime in the city: “I am for community policing. I want to have more officers, I want this community to feel safe.”

Rather than cutting police funding, the city should staff up the police force and build a police substation in D4 at St. John’s and I-35 (the old Home Depot site), Herrin argued. “The city voted bonds to build a substation right there. We bought the land, and the community needs a substation because the response times are getting longer.”

Though Casar defeated Herrin soundly, the challenger at least improved on his performance in previous elections. Running for the same seat in 2014, Herrin took 224 votes, then in 2016 he got 1,947 votes. This time he finished with 4,277 votes.

For his part, Casar took his victory over Herrin as vindication of his agenda. In a written statement shared with the Bulldog, he said, “Austin has the opportunity to become a model for what progressive and inclusive governance can achieve. We are leading the nation in reimagining public safety, investing in affordable housing, finding solutions to climate change, protecting lives from COVID-19, and focusing recovery efforts where they’re needed the most.”

“Despite constant fear-mongering from extremist officials like the governor, Austin has spoken loud and clear. We’re not going to be bullied, and we’re not going to turn back from our progressive values.”

Casar netted 11,555 votes for nearly 67 percent of those cast for three candidates. He also had far more money than his opponents, having raised nearly $82,000 through October 5. Herrin III raised more than $26,000 through the same period.

District 7—Incumbent Leslie Pool, who won this seat in 2014 when geographic districts were being established, won reelection in 2016 and easily dispatched her opponent Morgan Witt this year.

In a Facebook live event hosted by the Travis County Democratic Party last night, Pool said, “I’m just really grateful to my team for a big campaign win and to my council staff for making sure the train always runs on time. And I’m grateful to have such strong support from my neighbors across all District 7. There was not a precinct that I did not win.”

In a late night telephone interview on Tuesday, Witt said, “As a political newcomer we came into this with a whole lot to learn. I’m incredibly proud of my team and what we accomplished. We all work full-time. I see this not an ending but the start of something new.”

“This was a really good learning experience, meeting people, and I know more about my city than I did before. It’s definitely changed my life for the better.”

Two other incumbents must continue in runoffs

District 6—Incumbent Jimmy Flannigan, facing three challengers in the city’s northernmost district, fell well short of a majority, forcing him into a runoff. District 6 stretches well into Williamson County. Flannigan drew a combined total of 14,180 votes for both counties, for 40.22 percent.

The hard-fought race involved a substantial amount of PAC money and late-in-the-game attack ads that targeted Flannigan on his policy positions on the land code, homeless encampments, and public safety.

In the fight for second place, Mackenzie Kelly garnered a two-county total of 11,775 votes for 33.4 percent.

That placed her far ahead of Jennifer Mushtaler who netted 6,738 votes for 19.11 percent.

After a long day of campaigning, Mackenzie Kelly joined other Republican candidates at Pinballz arcade in northwest Austin for a watch party. Reached by phone after early voting results, she sounded weary but happy: “I really feel that the results show that District 6 is ready to take back their turf. It was drawn during 10-1 to be a more conservative district and I think the results show that I have strong support out here.”

“I’m very familiar with what’s on the hearts and minds of people in northwest Austin.”

Kelly credited her volunteers and supporters: “Our team is made up of a small army of volunteers who are fed up with city hall. they’re very hungry for change. And the numbers reflect that. Our core base of support will show up in the runoff.”

To win the runoff, Flannigan will have to ensure that he can drum up more turnout than his opponent—and this time without the support of a whole slate of other Democrats on the ticket.

Runoff election day is December 15, very close to the traditional holidays.
Flannigan and Mushtaler mostly stayed mum on the election, with final results still not tallied until after 11:30pm. Austin Sanders, a reporter for the Austin Chronicle, wrote on Twitter that he had connected briefly with Flannigan, who told him he was “energized” for a runoff and thanked the Williamson County Democrats for their support.

“The district went heavily for Biden…and I look forward to making the case and running against a Trump supporter who’s out of touch with the district.”

“With seven candidates (one of which dropped out) I expected a runoff and I’m pleased that more than 50 percent voted for Democrats,” Alter said, referring to her results combined with Pooja Sethi’s votes. Sethi was a distant third in early results with 7,807 votes or more than 18 percent.

Alter added that she believes that many of Robert Thomas’s supporters are Democrats as well “and share my beliefs and approaches and are looking for someone with integrity to represent them on the city council.”

Alter pointed to the Federal Elections Commission website that tracks individual donors. The site indicates that Virden made seven contributions to the Republican online donation platform Winred. Politico reported October 12, 2020, that Winred had raised more than $620 million in the third quarter. FEC records show that Virden had contributed $225 this year and the most recent $50 donation was earmarked for the Trump Make America Great Again Committee.

Virden texted her statement to the Bulldog just before midnight: “What a great night!  We’re thrilled to have made the runoff!

“We’ll be hitting the ground running tomorrow, and we plan to win the runoff on December 15th.  Our team of volunteers, contributors, and supporters are the ‘Dream Team’, and I’m confident my platform resonates with the majority of District 10. Our campaign has what it takes and we’re serious about winning this seat at the dais.”

Corrected at 2:13pm November 4, 2020: A previous version of this story misstated in the text (not in the chart) the wrong number of votes and percentage of votes for incumbent Alison Alter.

Bulldog reporter Daniel Van Oudenaren is a journalist with more than a decade of local, state, and international reporting.

Ken Martin has been covering local government, elections, and politics since 1981 in Austin’s three-county metro area. See more about Ken on the About page.

Down to the wire: Jimmy Flannigan and his challengers, October 30, 2020