The U.S. Global Change Research Program (USGCRP) coordinates federal research on environmental changes and their implications for society. The program began as a presidential initiative in 1989 during the Reagan–Bush era and called for “a comprehensive and integrated United States research program that will assist the nation and the world in the understanding, assessment, prediction and response to human-induced and natural processes of global change.”

The implications of this report are beyond extreme. Austin (Central Texas) normally has 12 days of 100-degree-plus heat per summer based on temperature records that go back to 1854. In the next 80 to 90 years, Austin is projected to average between 90 and 120 days of 100-degree plus heat every year. (See accompanying chart, Number of Days Over 1000F.) The Sonoran Desert Museum in Phoenix, Arizona, only averages 87 days over 100 degrees.

The Sonoran Desert is a traditional thorn and gravel desert with little to no water, blistering temperatures and, except for the natural inhabitants of the desert, is totally inhospitable to life. Austin’s summers will be a third more extreme than those of the Sonoran Desert and about ten times more extreme than the normal Texas Hill Country summers.

Most life, as we know it in the Hill Country, will be dead by mid century. The transition to a thorn and gravel desert will be well underway. Today the changes have already begun.

Two things complicate the issue. There is a simple scientific concept that says scientists are conservative in their work. This is the “publish or perish” concept. Simply put, a scientist must be absolutely certain about the results of his or her discoveries or they will not be able to publish their papers in the academic journals. If a scientist is found to be wrong after their results are published, the journals will be much more cautious about publishing that scientist’s work in the future. A scientist’s work is therefore conservative to minimize the risk of being wrong.

The second complicating factor is that the rate of change has increased. Not long after the turn of the century, impacts of warming started increasing faster. A quote from the USGCRP Report states the obvious “Some of the changes have been faster than previous assessments have projected.”

The next graphic shows the atmospheric load of carbon dioxide (as carbon) in gigatons, from the USGCRP Report. The colored lines are the computer model’s projections. The black line with the circles shows actual atmospheric measurements. The purple line is the A1F1 scenario (Intergovernmental Panel on Climate Change 2007 Report), more commonly known as “the worst-case scenario”. What the actual measurements show is carbon dioxide, right now, is greater than and increasing faster than the worst-case scenario from the climate models. 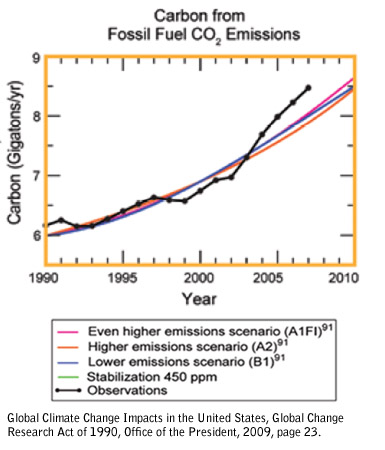 At the end of the 21st century (2090 to 2100), my grandkids (if I ever get any) will still be alive. But the plants and animals and beautiful Hill Country creeks will have died by mid-century. Desert plants and animals will not have had much time to colonize the area. What will remain will be bleak and lifeless, an ecosystem in limbo between climate states.

Dry preservation will create a tomb-like landscape, stark, bleached and sun-scorched. This may seem far-fetched, but little more than a few degrees of change can completely alter an ecosystem. In Austin this last summer, our average temperature was 4.8 degrees above normal. This small amount of warming set an all-time record, by a large margin, for the hottest summer ever recorded. Thousands of trees died because of the drought. The USGCRP says that parts of North America could see temperature increases of up to 13 degrees.

The brutal reality is, regional ecosystem extinction will not arrive at the end of the century. It will arrive any year now. It will progress in a worsening spiral until the streams and animals are gone and the forests have been reduced to sticks in the blazing sun. Some years, at least in the next decade, may seem somewhat normal. But the death will come unless we start reducing not just our emissions, but also the invisible greenhouse gas load that has been building in our atmosphere for centuries.

It comes down to this: Worse than the worst-case scenario means that our efforts to date have had no impact. Changes will continue beyond the 2090 to 2100 time frame, and much of what has been discussed in this article will happen even if we stop emitting all greenhouse gases this instant. But we can still take CO2 out of the atmosphere and reverse the built-in changes yet to come. This accomplishment will rival the Manhattan and Apollo projects. All we have to do is start spending money on our environment like we are spending it on our institutions that are too big to fail because; the Earth is too big to fail.

When Bruce Melton, P.E., isn’t practicing civil engineering, he’s studying climate change and writing a book about it, a book for the masses. Melton was one of eight Austinites named in the Heroes of Climate Change article published in The Good Life magazine in July 2007. To read more of his work on climate change, visit his website, Melton Engineering Services Austin. 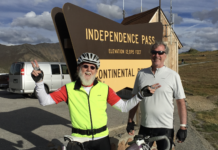