When it comes to hiring attorneys, the City of Georgetown just can’t seem to get it right.

Chapman was hired effective April 19, 2010, at an annual salary of $76,907, according to the Personnel Action Form obtained by The Austin Bulldog through an open records request filed under the Texas Public Information Act.

City Attorney Sokolow did not respond to two messages left with his office on Friday, requesting an interview about this matter.

Mayor George Garver on Friday told The Austin Bulldog that he was not consulted when Chapman was hired. Garver said he was not aware the City Charter required council approval to hire an assistant city attorney.

After checking with city staff, Garver said, “It (hiring an assistant city attorney) takes approval of the city council and that was not done. The hiring was done without the city attorney notifying the council about this action as required under our charter.”

Chapman had no municipal experience

“Shall have practiced law in the State of Texas including experience as it pertains to municipal government matters; for example, litigation and commercial law, land use and development, zoning, contracts, civil services, labor relations, water or waste water, or electric.”

Bridget Chapman has no such experience, according to the résumé she submitted to the City of Georgetown. Chapman’s résumé highlights her experience in commercial litigation and arbitration, states she is a certified mediator, and indicates she made $100,000 a year as a partner in the Houston law firm of Williams, Cupples, and Chapman LLP, where she worked from October 1992 to December 2009.

What Chapman did have to offer was a lot of powerful friends. She listed seven prominent individuals as references (attached to her résumé).

One of her references is Council Member Pat Berryman.

Chapman and Berryman happen to be close neighbors. 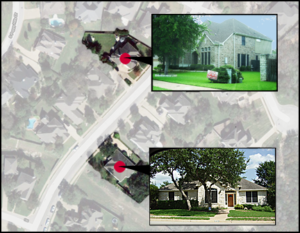 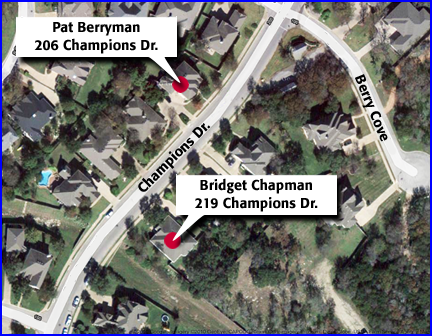 Berryman lives at 206 Champions Drive (in the upscale Berry Creek subdivision that includes a golf course and country club), according to the address listed in Chapman’s references.

Chapman lives just two doors down and across the street from Berryman at 219 Champions Drive, according to her application for employment (attached to her résumé).

Chapman’s lack of experience in municipal law is a serious concern for Mayor Garver, who noted that Section 5.06 of the Georgetown City Charter states:

“…assistant city attorneys shall be authorized to act for and on behalf of the City Attorney.”

Any time City Attorney Sokolow might be absent, through illness, vacation, or business travel, Garver said, “We will have, de facto, a city attorney with no municipal experience.”

The overriding question is whether Chapman is capable of fulfilling the duties of the office, as set forth in Section 5.06 of the City Charter:

“The City Attorney shall be the legal advisor of, and attorney for, all of the offices and departments of the City, and shall represent the City in all litigation and legal proceedings. The City Attorney shall draft, approve, or file written objections to every ordinance adopted by the Council, and shall pass upon all documents, contracts and legal instruments in which the City may have an interest.”

Now it appears the City Council will be forced to address not only the problems with Sokolow’s contract, but the defect in Chapman’s hiring as well.

Until Sokolow’s contract problems are rectified, his “actions are subject to being declared void through judicial action,” according to confidential letters, dated May 10 and May 11, that attorney Julia Gannaway wrote to advise the City of Georgetown regarding Sokolow’s appointment.

Two Georgetown citizens, Ross Hunter and Rick Williamson, are listed on Tuesday night’s agenda to address the city council “regarding public investigation of the city attorney.” Hunter says that Williamson will not speak but will instead cede his time to give Hunter six minutes to speak.

Hunter, who publishes the popular Georgetown blog, OldTowners.com, told The Austin Bulldog the gist of what he intends to tell the City Council Tuesday night:

“I am asking the council to use its unique power of investigation, given to it under Section 2.05 of the City Charter, to investigate all these serious allegations made in the press.”

Section 2.05 of the charter states:

Eason’s agenda item would allow anyone present at the meeting to sign up and comment “regarding public concerns relating to press reports about improprieties in the conduct of certain city business over which the council exercises authority and for which council is responsible. Council may wish to identify areas for future action.”

“Several citizens have contacted us relating their frustration about press reports of procedural irregularities in matters over which Council has authority. These include actions of the city attorney in relation to the rest of the staff, the City Council, outside legal counsel, the requirements of the City Charter, and the open government requirements of our State. A large number of citizens attended our last meeting in hopes of hearing a discussion of some of these issues on the dais. That did not occur. In fairness to the community, it seems appropriate for us to present whatever information we can provide, under the law, to the people who have placed their trust in us to provide the best, most open government possible. Rather than ask each of them to individually sign up under “Citizens Wishing to Address the Council”, it seems to be the least we can do to provide them this time tonight to share their concerns as well as hear our statements. We are stewards of their trust and should act only with their approval”

This would be a rare opportunity for citizens to address the council more spontaneously, as the rules otherwise require signing up the week before the council meetings.

Eason said she put this item on the agenda at the request of citizens who called and e-mailed her about numerous reports in The Austin Bulldog and the Williamson County Sun that reflect adversely on city officials. These include:

• The Austin Bulldog’s April 28 report that City Attorney Sokolow was hired under a contract that was not legally executed. He started work as city attorney last October 19. His contract still has not been resolved.

• The Austin Bulldog’s May 4 report about how Sokolow facilitated the illegal payment of $13,600 to Georgetown Council Member Berryman last December.

• The Williamson County Sun’s May 12 report that followed up and confirmed The Austin Bulldog’s report about Berryman’s illegal payment. (Sun articles are not available online.)

• The Austin Bulldog’s June 14 report about City Attorney Sokolow’s heavy-handed tactics that screwed up a deal to buy property for city facilities, hacked off school district officials, and alienated colleagues.

That report also stated that the Georgetown City Council hired Sokolow knowing he had been fired from his position as city attorney of League City, Texas, and had retaliated by suing the city, albeit unsuccessfully.

• The Williamson County Sun’s report two days later about Sokolow being hired in Georgetown despite his firing by, and lawsuit against, League City.

Will citizens get to speak?

Mayor Garver told The Austin Bulldog that City Manager Paul Brandenburg has secured the opinion of an outside attorney regarding Eason’s agenda item.

Because the legal opinion involves attorney-client privilege, Garver said he could not be specific about what it says. In general terms, he said, the opinion “suggests that the council needs to reflect on the appropriateness of that posting.”

So, whether citizens will be allowed to address the council Tuesday remains to be seen. The council could vote to pull Eason’s item from the agenda.

But what about free speech?

The First Amendment to the Bill of Rights that amend the Constitution of the United States of America, states:

“Congress shall make no law respecting an establishment of religion, or prohibiting the free exercise thereof; or abridging the freedom of speech, or of the press; or the right of the people peaceably to assemble, and to petition the Government for a redress of grievances.”

Does the U.S. Constitution apply to Georgetown, Texas?

Will the Georgetown City Council actually prevent concerned citizens from airing grievances and petitioning their government to address the inappropriate actions of the city’s elected and appointed officials?

We will find out Tuesday night and report what happens.

This report is licensed under a Creative Commons Attribution 3.0 United States License, and can be republished with attribution and a link to The Austin Bulldog. If you re-use this report, please let us know by e-mailing [email protected] This e-mail address is being protected from spambots. You need JavaScript enabled to view it .