Part 2 in a Series

Tomorrow morning the Williamson County Commissioners Court is scheduled to hear yet again from the Texas Association for Children and Families (TACF) about alleged corruption. The organization claims that for years a “racketeering enterprise” has been operating right under the noses of family law courts in Williamson County, wrecking the lives of children and parents, and ruining them financially.

The court-appointed professionals named by the TACF as being involved in the alleged scheme who were reached for comment have denied any wrongdoing.

This will be the fourth time representatives of the TACF and parents have appeared in person since last December 1 to complain about alleged injustices and plead for help. Previous appearances have yielded only disclaimers that these problems are beyond the power of the Commissioners Court to remedy.

This is a last-ditch attempt to get a so-far resistant Commissioners Court to establish a Domestic Relations Office, similar to one operated in Travis County for decades. This office would provide essential services focused solely on achieving the best outcomes for Williamson County parents going through divorce and child-custody disputes.

Joseph Gale, TACF’s executive director, will tell commissioners that parental rights are being abused and children are being damaged by a number of professionals involved in family law cases in Williamson County, who are allegedly more interested in extracting fees than achieving the best outcomes.

TACF and these parents seek the Commissioners Court’s cooperation in initiating a remedy. If that assistance is not forthcoming by June 1, TACF says Williamson County will be named as a defendant in a lawsuit.

Gale will deliver signed letters to the Commissioners Court on behalf of TACF, four mothers, and one father. These and possibly other parents are expected to be plaintiffs if a lawsuit is necessary. The parents claim their families and their children were and are being harmed by the failure of the Commissioners Court to supervise the judges and court appointed professionals.

These letters allege there is evidence of a “racketeering enterprise operating in Williamson County,” one that operates through its state district courts and county courts at law that preside over family law cases. The allegations do not implicate judges but do name specific professionals appointed by the courts.

Those accused are attorney Sara Naylor, licensed professional counselors Rachel Saenger and Kelley Baker, and Rhonda Hohmann, who owns a company called Access that provides services related to child custody cases, including supervised visitation, court testimony, and drug and alcohol testing. Hohmann also serves as an assistant to Baker, according to Baker’s website.

The Austin Bulldog e-mailed each of the accused to request comment, stating: “The Texas Association for Children and Families will accuse you by name in letters to be submitted to the Williamson County Commissioners Court.They will accuse you of being part of a ‘racketeering enterprise’ that extorts families through the services you have rendered in connection with family law cases involving child-custody disputes.”

Baker, Hohmann, and Saenger replied by e-mail as follows:

Baker: “These allegations are completely untrue. I have no further comment.”

Hohmann: “The pronouncement you have made is baseless and untrue.”

Saenger: “The statements you made in your e-mail to me are false and unfounded.”

Naylor did not respond to the e-mailed request for comments and did not return a request to call back left with her law office receptionist.

All of those accused were named in separate letters addressed to the Williamson County Commissioners signed by Gale on behalf of TACF; mothers Tammie Filla, Marina Ginn, Carol Green, and Cynthia Hsiung; and father Adam Young. (Disclosure: Young is engaged to this reporter’s daughter.)

Amicus attorneys, attorneys ad litem and guardians ad litem have a duty to investigate conditions and behavior in each parent’s household to ensure the protection and well-being of the children. Investigations may include interviewing the parents and children; inspecting living arrangements; reviewing medical, mental health, and criminal records; and collecting evidence through psychiatric evaluations and drug and alcohol testing. Counseling, therapy, and supervised visitations may also be required.

Parents inclined to refuse cooperation will usually be compelled to do so by a court order under threat of contempt of court.

Parents will be responsible for paying all costs associated with these services—also under threat of contempt of court—and that financial burden will be significant.

The remedy sought by these parents and TACF is for the Williamson County Commissioners Court to initiate concrete plans to establish a county Domestic Relations Office, provide a target date for it to begin operations, and “compensate the families who were damaged by your incompetent and harmful policies.”

The goal is for the new Domestic Relations Office to provide services to parents in Williamson County similar to those offered by Travis and seven other counties in Texas, to remove or reduce the motive to profit from a family’s legal troubles.

The first three times Commissioners Court members heard these complaints they took no action. Members of the Commissioners Court have disclaimed any authority to intervene in the judicial branch of government. They have instead directed attention to state licensing and local law enforcement agencies where complaints may be filed.

The TACF and parents say that what Commissioners Court members don’t realize is that their attempts to use these avenues of relief have proven fruitless.

Parents have attempted in vain to get help from law enforcement agencies. They have not been able to get Williamson County prosecutors to examine their evidence.

The opportunity to complain to state professional licensing agencies in same cases has been specifically prohibited by gag orders issued to parents. Complaints filed with licensing agencies by parents who were not under a gag order have been dismissed.

Parents claim that even bona fide complaints filed by doctors and schools with Child Protective Services over abuse of their children have been dismissed, allegedly due to interference by one of the court appointed professionals.

Bottom line: TACF and parents say the Commissioners Court has failed to use its political power, has ignored the opportunity to get involved and exert moral authority, and has shirked the leadership role it could be playing to protect the welfare of Williamson County citizens.

The demand for services to aid parents and children are great.

In 2013, the most recent year for which statistics are available, there were 2,752 divorces in Travis County affecting 1,977 children under the age of 18.

In Williamson County that year there were 938 divorces affecting 985 children.

Travis County provides a variety of services for parents going through divorce and child-custody disputes. These services are funded through the county budget and greatly reduce the financial burden on parents. These services include social studies, counseling, and guardians ad litem who are appointed to focus on the children’s best interests and make recommendations to the courts in cases involving termination of parental rights, divorce, and child custody.

The guardians ad litem in the Travis County Domestic Relations Office are salaried employees. Parents are charged for the guardian’s services based on a sliding scale according to income, from as little as $300 for each parent to as much as $2,700 each. And in cases of poverty even these relatively modest fees can be waived.

The Travis County Domestic Relations Office was established in 1956 and a Family Court Section was added in 1982 to provide additional services. Today the office has a staff of 51 full-time and one part-time employees and an annual budget for more than $3.6 million, said attorney Scot Doyal, who heads the office.

Williamson County, like 246 other counties in Texas, has no domestic relations office and these services are available only through the free market and at a price that in many cases is insurmountable for parents who are trying to look out for their children’s safety and welfare.

Guardians ad litem and related services in Williamson County are available only through private practitioners. These professionals act through court appointments, enjoy the confidence of judges, and exert nearly total control in determining the outcome of child-custody cases.

Generally these professionals are able to charge the going market rate. Judges act as their collection agents, issuing court orders that require parents to pay these bills. Failure to pay is not an option and may be treated as contempt of court.

With the power and control of court-appointed professionals comes the temptation to keep cases going for extended periods of time—during which the bills for parents keep piling up to increase the practitioners profit. Which is what the parents and TACF allege is happening.

Tom Mowdy, a retired U.S. Army major is not a member of TACF but he has been working for more than a year to assist the organization and the parents and children who have been harmed.

Mowdy ran unsuccessfully for Precinct 4 County Commissioner in 2014, garnering 7,656 votes to finish as runner-up to Ron Morrison in a three-man race, according to the Williamson County Election Results Archive.

Mowdy publishes a website called “Fighting Corruption in Texas and Williamson County.” Since May 3, 2015, he has published extensive coverage of the problems in family courts, including a six-part series. The last piece in the series was titled Chapter 6: The Child Sex Abuse Investigation Analysis (and it contains links to the first five chapters).

After citizens complained about the family court problems in Commissioners Court meetings of December 1, 2015, and January 5, 2016, County Judge Dan Gattis sent a letter January 11, 2016, to the TACF, care of Mowdy.

The judge’s letter thanked him and the organization but stated, “I am of the opinion that such requests cannot be fulfilled by the Commissioners Court since it … does not have purview or authority over family law cases in Williamson County and the way in which family law cases are handled in Williamson County. Rather, the County Court at Law Judges and the District Judges have been granted complete and absolute jurisdiction over the cases that are docketed in their courts.”

Judge Gattis’ letter said if a claim of criminal conduct is involved then the appropriate law enforcement agency should be contacted. If a judge were involved then the complaint could be filed with the Texas State Commission on Judicial Conduct, and attorney complaints with the State Bar of Texas. If complaints are for licensed medical professional then with the state licensing or regulatory agency.

Mowdy replied to Gattis in a January 25, 2016, letter. He acknowledged the Commissioners Court’s limits of authority and noted the various agencies have all been approached without effect.

Mowdy said he received no reply to that letter.

One of the parents alleging wrongdoing and calling for establishment of a Williamson County Domestic Relations Office is Cynthia Hsiung, an award-winning feature film director and producer of a two-time Emmy nominated television series, Young Hercules starring Ryan Gosling.

Hsiung has been working to produce a documentary titled Weeping for Wilco that conveys the suffering of parents caught up in the alleged scheme.

The documentary is still being developed but a rough-cut trailer has just been published on YouTube. It was put together on a shoe-string budget with footage from an iPhone and an inexpensive video camera.

Funding is needed to improve the trailer and finish the documentary project. Efforts so far have produced only a trickle of money.  A little-publicized Booster campaign that ended over a month ago netted only $170.

A new fundraising campaign called “Stop Williamson County Corruption,” which would help pay legal fees for the Texas Association for Children and Families, is currently online and has raised just $375 so far. A copy of the Weeping for Wilco trailer is also on that site.

A Tale of Two Counties: Child custody cases get help in Travis County but in Williamson and most other counties you’re on your own, March 15, 2016 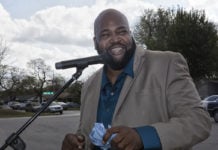 No Gun, No Self-Defense

Legal Battle Won But War Ahead

Must Deferred Prosecution Agreements be Secret?

Boards of Examiners Ripped for Backlogs