The Travis Central Appraisal District has purchased a building more than twice the size of its current facility for $8.53 million.

Plans call for spending upwards of $8 million more to renovate the building and construct a parking garage.

In presenting the project for approval by taxing units that fund the appraisal district’s budget, Chief Appraiser Marya Crigler claimed the larger facility was needed because of increased numbers of property valuation protests required expansion of the Travis Appraisal Review Board and a larger space to accommodate the  ARB’s formal hearings, 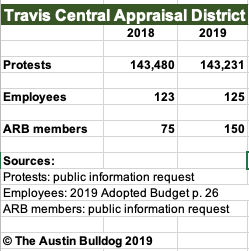 This despite the fact that the number of full-time TCAD employees remained essentially unchanged from 2018 to 2019 and the number of protests filed in 2019 is nearly identical to the number filed in 2018, according to records obtained through public information requests.

As The Austin Bulldog reported June 6, 2019, Chief Appraiser Crigler eliminated face-to-face meetings between appraisers and property owners or their agents and instead required protests to be filed through the district’s e-services portal.

This resulted in far fewer informal settlements and drove the need for increased numbers of formal hearings before the Appraisal Review Board (ARB).

The increase in formal protest hearings stemming from changes in the informal protest process was addressed by hiring and training additional ARB members and establishing 20 ARB panels to hold hearings, so statutory deadlines for resolving 95 percent of protests would be accomplished in time to certify the tax rolls needed by taxing units to finalize budgets and set tax rates.

Increasing the number of ARB members raised the cost of paying and supporting them from $235,675 in 2018 to an estimated $2.2 million in 2019, according to information obtained through a public information request.

The Appraisal Review Board is required to hear and determine all or substantially all timely filed protests and approve the records by July 20, but may not do so if more than 5 percent of the total appraised value remains under protest, according to Tax Code Section 41.12(a)-(c). But in counties with population of 1 million or more the appraisal district’s board of directors may postpone the deadline to no later than August 30 or increase the threshold percentage from 5 percent to 10 percent of the appraised value of properties not under protest.

Proposals for new offices due soon

Architectural firms have until 2pm this Friday July 19 to submit qualifications for a shot at designing improvements to an existing 72,720-square-foot building built in 1975. The structure, located at 850 E. Anderson Lane near the northeast corner of I-35 and U.S. Highway 183, most recently housed the offices of National Western Life Insurance Company.

The deadline to receive proposals for construction required for renovation comes just a week later at 2pm Friday July 26.

When work on the four-story building is finished it will house the staff of Travis Central Appraisal District with plenty of room for the seasonal protest hearings conducted by the Travis Appraisal Review Board.

Interested firms got short notice of these opportunities. Ads were published in the Austin American-Statesman barely two weeks ahead of the respective deadlines.

If acceptable proposals are obtained and approved there will be no half-stepping on getting the work done, either.

The schedule calls for executing an agreement with the chosen architects by August 9 and getting design drawing and schematics completed and permits filed by September 30.

Likewise the schedule calls to cut a deal with a construction manager-at-risk by August 16, begin construction by November 1, and complete the work by May 31, 2020—just in time for the Appraisal Review Board to kickoff hearings for 2020 valuation protests.

The request for construction proposals estimates that interior renovations will cost $3.5 million and building a parking garage will cost $4.3 million.

Appraisal Review Board hearings for this year’s protests are already being held in a warren of cubicles set up in a ground-floor wing of the building. The appraisal district leased the facility January 31, 2019, for $35,000 a month and purchased it June 7, 2019, for $8.53 million.

The building and 2.95-acre site was appraised by Austin-based CBRE as of January 1, 2018, and assigned a value of $7.5 million. The report stated that the property was on the market at the time for $9.35 million. (Actually the appraisal states it was for 844 E. Anderson Lane, not 850 E. Anderson. Chief Appraiser Crigler said the address was changed after the CBRE report was completed.)

The purchase from The Westcap Corporation of Delaware was authorized by 850 EAL Holding Corporation, a nonprofit formed March 28, 2019, whose directors are the three officers of the Travis Central Appraisal District’s board of directors: board president Tom Buckle, vice president Bruce Grube, and secretary-treasurer James Valadez.

The deal was financed by a $10 million loan from the Government Capital Corporation and is to be repaid with 4.3 percent interest over a period of 20 years. Quarterly payments of $187,298 and change will total $14,983,873 over the life of the contract.

The purchase was authorized in advance by the taxing units within Travis County—including Travis County, school districts, and cities—whose tax rolls are prepared by Travis Central Appraisal District.

Chief Appraiser Crigler sent letters to taxing units in April and May 2019. The letters stated in bold print, “The District will not request any additional funds from the taxing units for this real estate purchase. The District holds sufficient funds in dedicated reserves and annually budgeted reserves for the building purchase and renovations.”

The letters also requested permission, after 850 E. Anderson Lane is renovated and operations are moved there permanently, to sell or lease the existing headquarters building at 8314 Cross Park Drive, a two-story structure of 34,909 square feet, and use the proceeds to make payments on the new facility.